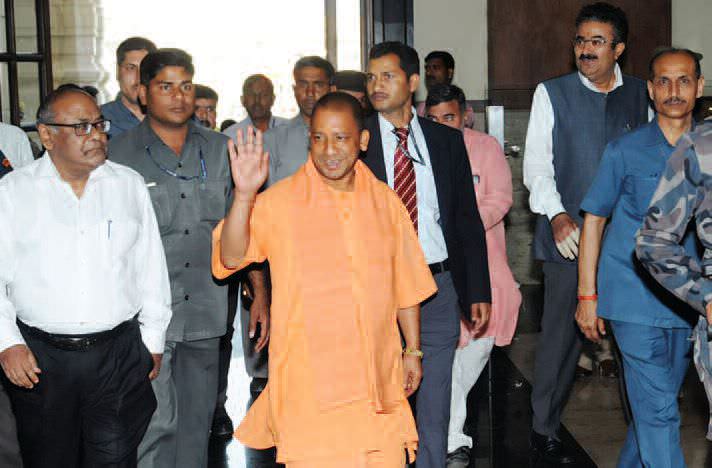 No wonder, soon after taking over as the CM, Yogi clarified that his government would follow the party’s and Modi’s line of sabka saath, sabka vikas. No section of the state’s citizenry, no community or caste would be discriminated against by his government. He was equivocal about the Muslims that they particularly have nothing to fear. He also instructed the government officials not to discriminate anyone.

If the result of the Uttar Pradesh (UP) legislative assembly election on March 11, 2017 elicited a stunning surprise from the rival political parties and election experts alike, the selection of Adityanath Yogi as Chief Minister of the state a week later (18 March 2017) followed a spate of criticism after a numbing silence amongst the commentators. Bharatiya Janata Party (BJP) predictably put up a brave front in spite of the fact that despite a clamour for the Yogi in one section of the party, the names floated even remotely did not suggest him to be a possibility. Obviously, where the names of the Union Home Minister Rajnath Singh, Union Minister of State Manoj Sinha, as also that of the UP party chief Keshav Prasad Maurya were floated and doing rounds with intense speculations, emergence of the Yogi as the joker in the pack stunned the expectant commentators, though it elicited exultations from amongst his supporters, there are numerous in the category.

How did Adityanath Yogi emerge the victor? There is not clarity on his ascent. One theory emerging from the party attributes it to the support he commands amongst the BJP Members of Legislative Assembly (MLA). According to this theory, Union Home Minister Rajnath Singh was the pick of the Rashtriya Swayam Sewak Sangh (RSS). He was also keen to return to the state. However, the Modi-Shah combine was not prepared to give him, or any other leader anointed CM of UP for that matter, a free run. One condition put forward to him was that given criticality of the state in 2019 general election, the Chief Minister’s Office (CMO) would work in close liaison with the Prime Minister’s Office (PMO). Singh was not agreeable to this. Focus then turned to Union Minister of State for Railways Manoj Sinha and the state party chief Keshav Prasad Maurya. Sinha had Modi-Shah backing for being clean, educated, suave. Even though RSS did not quite favour him, he was emerging a favourite over Maurya, who comes from the backward community. The Yogi’s hat too was in the ring, even though he was not being backed either by the Modi-Shah combine (and the party), or the RSS.

In order to resolve the dilemma, and perhaps confident that handpicked candidates who have entered the UP Assembly would stick to the preference of the Modi-Shah High Command. According to party sources, 274 of the 312 MLAs voted for Adityanath Yogi, tying the hands of the High Command. However, at this stage a few conditions were set for the CM elect. First, he would refrain from his provocative and divisive rhetoric. Second, his CMO would function in direct liaison with the PMO. And, third, there would be two Deputy Chief Ministers to ‘aid’ him. He readily agreed and the stage was set for the first ascetic CM of UP.