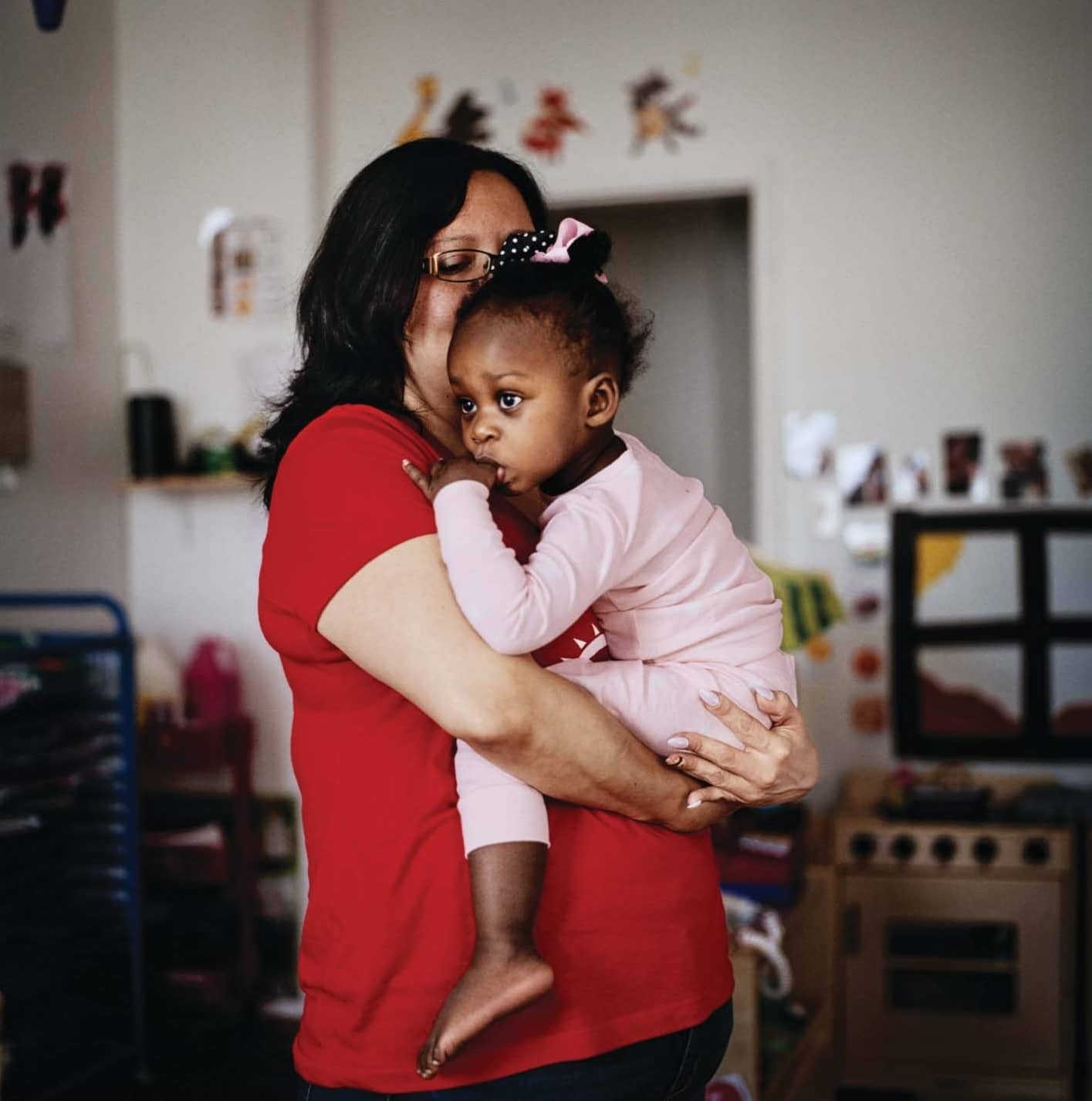 THE BRUTAL MATH OF CARING FOR CHILDREN IN AMERICA

Katie Reilly And Belinda Luscombe
ASHLEY ALCARAZ REMEMBERS WHEN SHE STARTED TO regret entrusting her infant daughter Paysen to an unlicensed in-home day care when she returned to work. She found out her daughter had been sleeping on the floor in a house where dogs and cats roamed around, and she worried that older toddlers might step on the baby. After her request that the baby sleep in a crib was ignored, she pulled Paysen out, but the day care had been the most affordable nearby option and Alcaraz had already used up her allotted three weeks of paid maternity leave—in addition to three weeks of unpaid leave—from the Iowa hospital where she works as an X-ray technologist. Desperate for trustworthy care, she enrolled Paysen at Tipton Adaptive Daycare in Tipton, Iowa, which was more expensive, at $640 per month—about 18% of her income—but the most affordable licensed childcare available. It was worth the cost, Alcaraz felt, because she could tell the staff cared about her daughter, greeting the 16-month-old by name each morning.

Still, Alcaraz, 25, and her boyfriend now often run out of money for groceries while paying the day-care bill. “Right now, it’s paycheck to paycheck,” Alcaraz says. “It’s a struggle.”

Affordable childcare is at once one of the most tantalizing promises of contemporary American life, and the most broken. Our modern economy cannot function without a system for the nurturing of our youngest citizens—as of 2017 there were nearly 15 million children under 6 in this country with all available parents in the workforce. But for everyone except the very wealthy, childcare is ruinously expensive. In 28 states and the District of Columbia, one year of infant care, on average, sets parents back as much as a year at a four-year public college, and nationally childcare costs on average between $9,000 and $9,600 annually, according to the advocacy organization Child Care Aware. Many parents spend far more. In Boston, 36-year-old Amy Deveau will spend $21,000 this year, a third of her salary, on day care for her 2-year-old—more than she would spend on tuition and fees if her daughter were enrolled at the University of Massachusetts. “What’s crazy is that you have 18 years to plan for your child to go to college and put together your savings accounts and work on loans,” Deveau says. “You don’t have the luxury of having 18 years to plan for day care.”

Nearly 2 million parents had to leave work, change jobs or turn down a job offer because of childcare obligations in 2016, according to an analysis by the Center for American Progress (CAP), a left-leaning think tank. America’s rickety childcare infrastructure is a drain on parents, who lose up to four times their salary in lifetime earnings for every year they’re out of the workforce, but even more of a drag on the U.S. economy, costing it $57 billion every year in lost earnings, productivity and revenue, according to a report published in January by ReadyNation, a nonprofit advocacy group of business executives.

The burden of childcare beleaguers economic growth on two fronts, tamping down the productivity of citizens as well as pushing more of them onto taxpayer sponsored programs such as SNAP (formerly known as food stamps), WIC (benefits for low-income mothers) and TANF (welfare). Cruelly, it’s usually the more impoverished who find it most difficult to afford childcare and thus advance their careers and become more prosperous, further stymieing economic mobility. But perhaps the most damaging punch that unaffordable childcare is dealing to the U.S. economy is its diminishing of future generations. Young Americans are having fewer children—the 2018 birth rate was the lowest in 32 years—and according to a survey conducted by Morning Consult for the New York Times, the expense of childcare is the No. 1 reason.

Yet caregivers can’t just charge less. So confounding is the childcare economy that despite the sticker shock for parents, looking after children remains a very poorly paid job. Deborah VanderGaast, the director of Tipton Adaptive Daycare, where Alcaraz sends Paysen, says the business model just isn’t sustainable without subsidies. VanderGaast, 51, charges $160 per week for full-time infant and toddler care—a rate she tries to keep affordable for parents—but she is barely breaking even. She says about 25 families have past-due balances. She sets up payment plans and helps parents with childcare assistance applications. Sometimes she asks them to help her with odd jobs at the day care to pay down their debt.

“It must appear I’m a terrible business manager. I know that common sense would be to kick out a family when they get behind on their bill,” she says, but she understands families are struggling. State licensing requirements that ensure safety and quality mean she can have no less than one worker for every four children under 2, and one worker for every six children under 3—she pays 15 employees, starting at $7.25 to $10 an hour. She can’t skimp on health and safety inspections, nor can she cut back on food, knowing that many of her parents already rely on food stamps. She loses money on every infant and 2-year-old in her care. After doing payroll one week in October, Vander Gaast says, her business bank account had $9.30 remaining, and she hadn’t yet ordered the day care’s groceries.

At the same time, she knows she isn’t paying her staff enough: “My employees have to rely on food stamps and childcare assistance themselves because they can’t afford childcare because I can’t pay them a living wage.” Ten of the 15 workers have second jobs. Turnover is high enough that she finds herself training new people nearly every week. She doesn’t blame workers for leaving. “Walmart pays better, McDonald’s pays better, the grocery store pays better,” VanderGaast says.