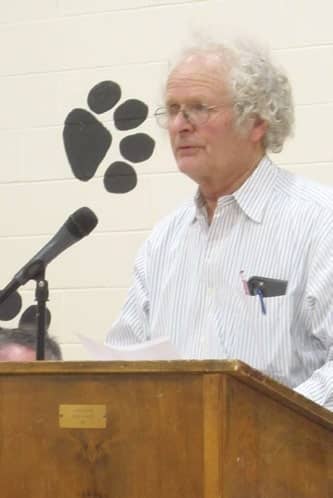 The school, a private academy that serves as the high school for a number of area towns, initially had sought a much larger tuition increase in an effort to alleviate budget woes that stemmed in part from a significant decline in the number of foreign boarding students at the school.

Deb Ludlow, a Brooksville resident, GSA graduate and a GSA trustee, provided some of the history that led to the funding request noting that the state-set tuition does not cover the cost of educating students at GSA. She explained that the academy had been running on an extremely tight budget for many years, until the international boarding program brought an infusion of cash.

The GSA trustees had initially proposed a tuition increase of $2,700, to be implemented over the next three years, in an effort to close the budget gap. Ludlow stressed that the $300 increase in the IVF this year will not meet the school’s financial needs, and that the budget crunch will be worse next year as more Chinese students graduate, taking with them the $50,000 annual fee they were paying.

Although the additional cost was a concern for some residents, it was the lack of information about the GSA budget that rankled. The lack of transparency in the school’s operations has dogged trustees since they made their initial funding request. Brooksville School Committee member Barbara Black Chapman said the lack of information about the high school’s budget made it difficult for her to respond to questions about it in the same way she can about the elementary school budget. Voters at Town Meeting have the option to vote for or against individual items in those budget lines, she said.