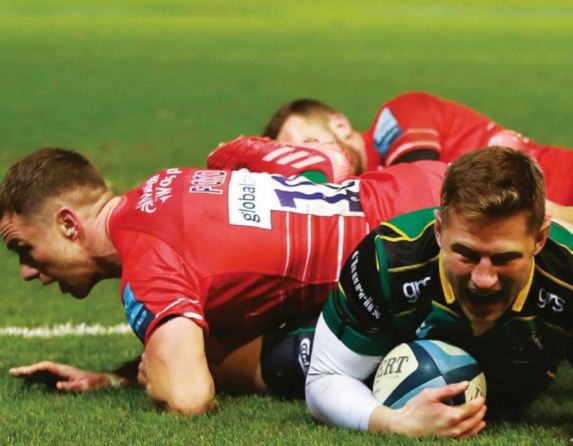 Centre Fraser Dingwall credits the impact of Northampton’s highly-rated backs coach Sam Vesty for taking him to the brink of a first England cap.

Former England U20s star Dingwall, 21, earned a shock Six Nations call-up in January and, on the back of a fulfilling experience, is determined to take the next step as Saints prepare to resume their title charge ahead of the Autumn Internationals.

Having pitted his wits in training alongside Red Rose midfield regulars Owen Farrell, Henry Slade and Manu Tuilagi earlier this year, Dingwall told The Rugby Paper: “It gave me a marker of the level it takes and it’s something I’m working towards.

“It’s my goal and by setting out and seeing what goes into a week with England and how hard those players train, what they put into it, the skill level, mental strength and everything that goes with it, it’s something you constantly strive towards.

“I’m just trying to soak up as much as possible, and I can do that at Saints as well, with the players we’ve got like Rory Hutchinson, Piers Francis, below right, and Matt Proctor – all internationals themselves, so it’s a very strong midfield group at the club.

“We all bring something different so it means you learn off each other and push the boundaries and hopefully I’m putting my hand up.”