So proud to be made captain of my country 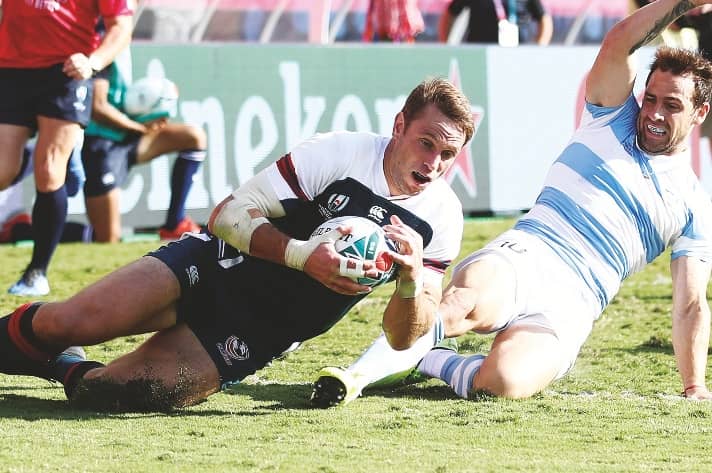 My dad and brother played American Football, but my mom kept me away, so I like to joke with her that I went on to make tackles for a living anyway – in rugby.

Initially she was less than thrilled when rugby found me as a freshman at university, but by the end of it, she became my biggest fan.

Finding the game late, I knew I needed to accelerate my learning. So I broke it down into segments, relating the elements of rugby to the sports I played growing up. One skill that translated particularly well was the high ball. I like to think that I became an expert. Although, I spent a lot of time training it, the foundation of my ability was likely due to my basketball background and grabbing rebounds.

As soon as I knew that rugby was what I wanted to do, I became a student of the sport, watching old VHS tapes of past World Cups and Six Nations to trawling YouTube. My desire for knowledge was also grounded in my competitive mindset and thinking, ‘shoot, that kid in New Zealand has been playing the game since he could walk’, and knowing that if I didn’t work as hard as I possibly could I wouldn’t be able to catch up.

As an athlete, preparation is everything. But sometimes the timing of when your moment finds you boils down to chance. I definitely feel some fortunate things happened to me, but I was prepared to meet them when they came.

For example, my break with the Eagles came in 2011, on the eve of the World Cup. Because Chris Wyles’ ankle still wasn’t quite right, I assumed the starting full-back spot, making my debut against Russia in Worcester and wearing 15 through the warm-up matches.

Suddenly my opportunity had arrived. I had finally earned the right to wear my country’s jersey. Early on the responsibility of the jersey was built into me through a long-held Eagles quote, “The honour is not in the selection, but in the performance.”