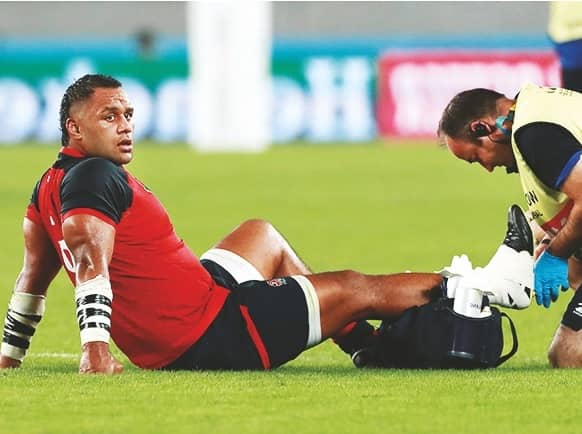 BILLY Vunipola gave England a World Cup injury scare when he was taken off at halftime in the 39-10 Pool C win over Argentina at Tokyo Stadium.

The victory ensured Eddie Jones’ side were the first team to qualify for the quarter-finals but the Vunipola knock could take the gloss of it.

The No.8 twisted his ankle and did not reappear for the second half and his absence would be a major blow for Jones.

Vunipola, 26, has started all 12 of England’s Test matches this year.

Jones tried to make light of the injury by saying Vunipola had slipped up on a piece of Kobe beef before adding: “He has twisted his ankle but we don’t think it is too serious.”

Captain Owen Farrell also got a bang on the jaw in the incident that saw Argentina lock Tomas Lavanini sent off in the 18th minute.

Farrell did not leave the pitch but maintained he was undamaged despite missing four kicks at goal after the blow.

He said: “I feel fine. It’s obviously concussion that’s the worry but I didn’t get hit anywhere near the top of the head. Maybe your jaw gets a bit sore but I was fine and there was no need for a HIA.”