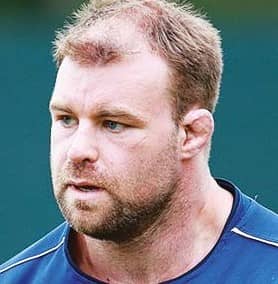 SALE Sharks say they are ‘astounded’ by WillGriff John’s exclusion from the Wales squad following his selection before the Six Nations went into lockdown.

John had been named as the starting tighthead against Scotland only for the match, and his Test debut, to be called off 24 hours later.

Now he finds himself so far down the national rankings that four other tightheads have been picked ahead of him for the six-Test autumn schedule.

“I was astounded when I saw that they hadn’t picked him,’’ Steve Diamond, Sale’s director of rugby, told The Rugby Paper. “While Griff has been a massive work in progress over the last two years, he has also been a dominant tighthead.

“In two-and-a-half years he has missed only four games for us out of one hundred due to injury. He’s a huge man, a good scrummager and a good defender. I think it’s a poor decision. I’m disappointed.’’

A gigantic figure at 6ft 3in and almost 20 stone, John’s choice for the last round of the Six Nations in March followed the mangling of the Welsh scrum at Twickenham the previous week.