From Upminster To Upcycled: Vivarail's D-train

Ben Jones visits Long Marston to find out how redundant District Line trains are being rebuilt to provide cheaper and greener alternatives to brand new multiple units – and how Vivarail is looking to the future with new methods of propulsion.

SOMEWHERE deep in rural Warwickshire, a former London Underground ‘DStock’ driving car stands on a railway siding. Surrounded by dozens of its sisters, mothballed Midland Metro tramcars, ex-Thameslink Class 319s, and redundant freight wagons, it’s not much to look at. Then suddenly – silently – it sets off, accelerating quickly and cantering around the test track with no more than a distant electrical whine. No, it’s not a runaway, but Vivarail’s battery powered D-Train demonstrator – one of several options the company is now developing to power its upcycled trains.

Inside, a bank of batteries obtained from the Bombardier/Network Rail Independently Powered Electric Multiple Unit (IPEMU) project provides power for the traction motors and enough charge for up to 80 hours of operation. It’s unlikely this could be replicated in the harsher realities of main line operation, but computer simulations predict it would be sufficient for a full-day diagram on a branch line such as Maidenhead to Marlow.

The modular design of the company’s traction packages is encouraging it to investigate various methods of propulsion, from diesel- electric ‘gensets’ to DC or AC electric, hybrids and, in the longer term, hydrogen fuel cells. The single-car battery prototype was developed in just four months, between January and April 2017, in response to the changing demands of train operators. The first production battery train is close to completion and should start its main line trials in April.

Since Vivarail’s inception around five years ago, the UK rail market has changed rapidly. The trains were initially envisaged as a way of re-using spare D Stock sets to solve a looming shortage of DMUs, and replace the Class 142-144 ‘Pacer’ railbuses, but are now being offered as a potential ‘green’ alternative to conventional diesel units for urban and low-density rural routes. 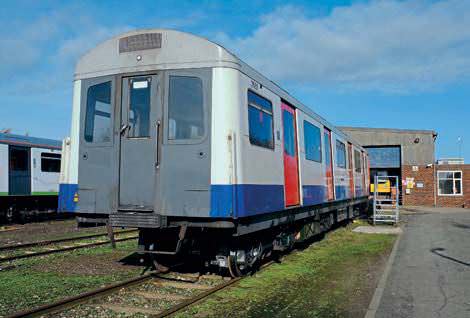 The project is being led by former Chiltern Railways chairman Adrian Shooter and former Wrexham & Shropshire Railway MD Andy Hamilton, plus financial backing from Railroad Development Corporation (RRDC) in the USA, with Vivarail having acquired 228 vehicles from LUL – enough for around 70-75 ‘D Trains’.

The vehicles have corrosion-free aluminium bodies and relatively new FLEX100 bogies, fitted during a refurbishment programme less than 10 years ago, and are seen as an ideal basis for ‘upcycling’ to create new mainline trains.

Central to the concept is a highly modular underframe arrangement, allowing engine, battery or generator packs to be exchanged very quickly using a forklift truck – largely eliminating the need for depot visits. Vivarail claims that engine changes can be completed in just 10 minutes and ‘D Trains’ will only require inspections over a pit road every nine months.