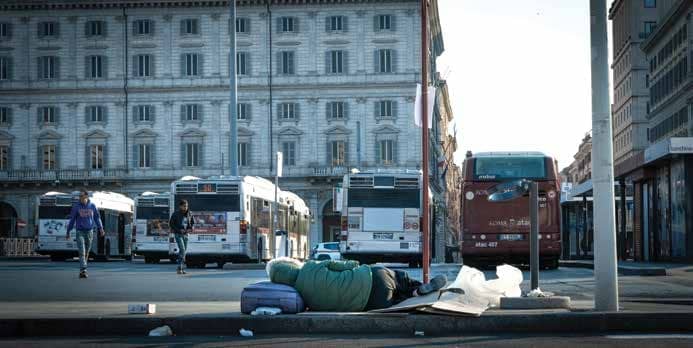 The buses that pass the Piazza dei Cinquecento, in front of Rome’s Termini railway station, have been running almost empty ever since the Italian capital went under lockdown, on 11 March, due to the COVID-19 pandemic. The few passengers who do alight, their faces hidden behind masks, walk quickly, as though they could flee the coronavirus as they would a predator. Those who cannot run are vagrants. There are almost a hundred of them in the piazza, nearly all of them Italian.

One of the vagrants, who wished to remain anonymous, told us that he used to work at a golf resort in Tuscany, a region in central Italy. After losing his job in March, he was rendered homeless. He came to Rome hoping to earn some money panhandling. When we met him, he was waiting for a permit to go back home. “We’re all nervous,” he told us. “The situation has become dangerous. Some of us have been fined by the police, and we don’t know if and when volunteers will come and hand out food.”

With around five thousand cases in Lazio, the region in which Rome is located, the contagion in the capital is still relatively under control when compared to northern Italy. Nonetheless, the city is almost empty. The 29 million tourists who visit every year have stopped crowding the Spanish Steps and the Trevi Fountain. Rome’s streets, usually packed with traffic, are deserted. The millions of commuters who passed through the bus and train stations are staying home. The only people remaining on the streets are those who do not have a house in which to spend the quarantine.

According to data provided by Caritas, a charitable association funded by Italian bishops, around eight thousand homeless people live in Rome. If you add the people living in economically precarious situations, such as those who own a home but live from hand to mouth, this number grows to around fourteen thousand. People who used to get by through panhandling, or by earning just enough to feed themselves, face enormous hardships due to the decrees enacted to contain the pandemic. Those who did not find refuge in homeless shelters are now sleeping in hedges, on sidewalks, in shacks under ancient Roman aqueducts or, more often, around railway stations. They rely on charities to get by, but social-distancing measures have restricted even this vital source of support.