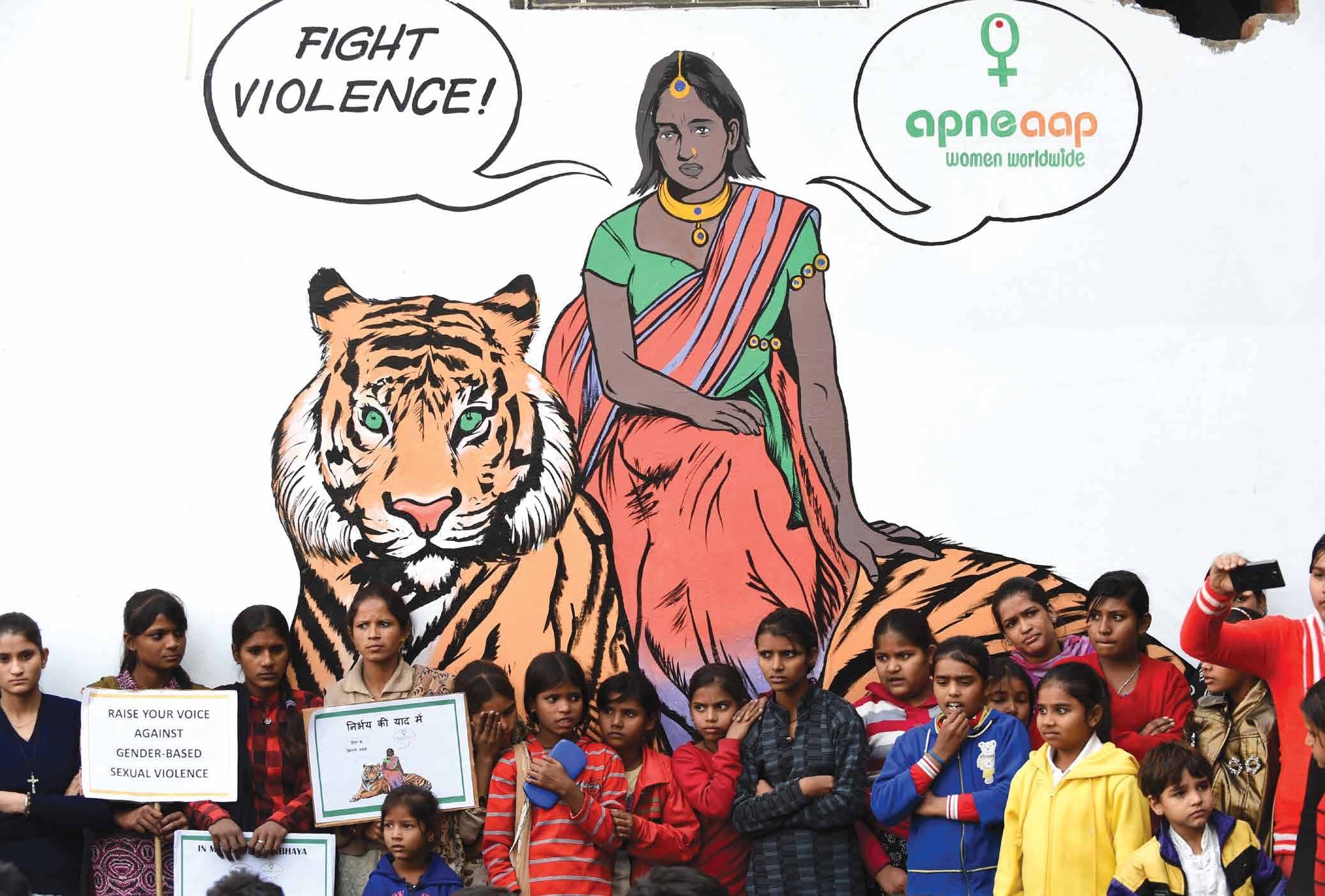 A report on the operations of Apne Aap, an antitrafficking NGO, in Forbesganj and Kolkata

THE RICKSHAW PULLED UP a short distance away from our destination—the driver was reluctant to go any closer. I had arrived at Rampur, an area of Forbesganj, a city near the Nepal border in Bihar. With me was Sanju Jha, an employee of Apne Aap Women Worldwide, an NGO with the stated goal of ending sex trafficking. Apne Aap operates a centre in Rampur’s red-light area, where it claims to have made great strides towards its mission. “We have not been able to stop it completely but we have saved the next generation from this work,” Jha told me on our rickshaw ride. “Now, women venture out into public spaces. They go to see a doctor. They even go to the bank.”

At the centre, Jha told me that sex work was long an inter-generational occupation in the area, but “it has stopped with their fourth generation, which is under our guidance, because we have completely connected them with education.” Children were now imploring their mothers to quit sex work, she added, and the presence of Apne Aap’s workers also deterred soliciting. “We are on duty for eight hours here,” she said, and “the work done by existing sex workers in those eight hours is next to nothing.”

I was invited to attend a class for children the next morning, led by Jha and with her colleagues Meena Khatun and Fatima Khatun helping out. There were 23 children at the centre that day, all seated in a circle, aged roughly between eight and twelve. They were from disadvantaged backgrounds, but, by Jha’s admission, most did not come from the red-light area, and were from other neighbourhoods nearby. Jha followed a uniform method, asking the children to recite numbers and the alphabet, and also some simple poems. She pointed out my presence, and encouraged the reluctant children to sing and dance for “didi.”

Afterwards, the Apne Aap staff took me to two houses in the red-light area—a single street with roughly ten single-storey houses on either side— where they were on friendly terms with the women. I had no chance on this small tour to interact independently with the area’s residents.

Meena, a former sex worker, told me the story of her life. She had run away from a brothel in nearby Katihar district, she said, and later, with Apne Aap’s help, had rescued her daughter from the same brothel after a police raid. Her story has been told in international television reports, been adapted into a short feature film by the Hollywood star Lucy Liu, and is a staple of Apne Aap’s publicity materials. Meena’s daughter is now married and settled in Delhi, while she remains in Forbesganj and works with Apne Aap.

Meena listed Apne Aap’s initiatives to discourage sex work in the area. “I formed the Mahila Mandal,” she said, and explained that the women’s group ran under the aegis of Apne Aap for seven or eight years before becoming an independent self-help collective. “I also started the Kishori Mandal. It was a group of ten or twelve girls who played games, learnt tailoring and crafts. We would hold discussions on child marriage. We told them that if you become aware, your mothers will.”

In close to three weeks in Forbesganj, spanning October and November 2019, I did not see the area’s women visit the Apne Aap centre. The staff put this down to the festive season—Diwali and Chhatth Puja occurred during my time there. The morning class for children was the only regular activity at the centre during my stay. The women spent their time doing chores at home, a few of them also tending to small shops run out of their houses. I noticed three women sitting by the doors to their houses on various afternoons, in anticipation of clients. I did not see any dedicated brothels. For the sex workers here, as in much of India, their homes also serve as their places of work.

I had travelled to Forbesganj at the invitation of Apne Aap. In the course of writing an essay on sex work in India (see page 28), Siddharth Dube, a contributing editor at The Caravan, had sent questions to Ruchira Gupta, Apne Aap’s founder, about her and her organisation’s work. Apne Aap asked The Caravan to send a reporter to see its operations first-hand. Besides Forbesganj, I also travelled to Kolkata, Apne Aap’s second centre of work—the third is Delhi.

Apne Aap’s staff in both places was welcoming and cooperative, and eager to share their work. But, I found, their enthusiasm for the NGO was rarely matched among the people it says it has benefited. There was very often a distance between the claims made by Apne Aap and the accounts I heard from people in Forbesganj and Kolkata when not in the presence of Apne Aap staff. And, while the organisation took pains to show me its initiatives on the ground and shared several individual success stories, it was far from open in sharing crucial information on its overall workings. The section of the Apne Aap website hosting its financial statements and annual reports is password-protected, in violation of established standards of transparency for charitable organisations. Despite multiple requests, Apne Aap did not share these documents or grant access to them on its website.

Apne Aap’s work in Forbesganj, Gupta’s home town, began in the early 2000s. The organisation’s project office in the city shares a compound with Gupta’s house. Praveen Kumar Sahi, an administrative officer for Apne Aap, told me at the office that the organisation conducted an early survey of sex workers in Rampur in the early 2000s, to serve as a baseline. “There were 147 women and girls in 80 homes, most of them from the Nats community,” he said. According to figures shared with The Caravan by Tinku Khanna, Apne Aap’s executive director, the NGO’s baseline survey found “72 brothels in Forbesganj”—indicating that the organisation likely counted homes where women sold sex as brothels.

The Nats are an extremely marginalised, once nomadic community spread across northern India, with their largest concentration in Bihar. Mohammed Kalam, a Nat himself, joined Apne Aap in 2004 as a mediator between the NGO and the community, and remained with it for 14 years before resigning over what he said were major differences with the organisation. At his home in Forbesganj, he told me that the baseline numbers Sahi had shared were false, and that no more than ninety women in the area were engaged in sex work in 2003.

Sahi told me that Apne Aap was focussed on curbing what he described as the Nats’ “family business,” and, like Jha, emphasised that the organisation had succeeded by educating a new generation of children. He added that the two-hour morning classes at the centre had been going since 2004. But, by his own account, Apne Aap’s attempts at delivering education beyond these elementary classes did not go smoothly.

In 2004, the government, under the Sarva Shiksha Abhiyan, began to open a series of Kasturba Gandhi Balika Vidyalayas—residential schools for girls from the Scheduled Castes and Scheduled Tribes. Apne Aap tied up with the Bihar government to run a KGBV, which opened in 2007. Since no suitable building could be found in Forbesganj, the school was set up alongside a middle school in the village of Simraha, roughly a dozen kilometres away. Apne Aap planned to use the school to house girls it believed were at risk of being trafficked into sex work, mostly by their families. Sahi said the organisation enrolled 22 girls from the Nat community, who shared the school with students from other SC and ST groups, as well as from the Other Backward Classes.

The girls’ families did not take kindly to their separation. On one occasion, Sahi said, “the girls went home for Durga Puja holidays. After the holidays, only 11 girls returned. Around eighteen girls were not allowed to come back.” According to Sahi, the girls’ mothers were willing to send their daughters to school, but the men in their families tried to have them drop out.

Apne Aap pressured the families to send the girls back, and in numerous cases had men in their families arrested. In a 2010 newsletter, the organisation published a letter from Gupta to the local police urging action in the cases of children who had not returned to the school, naming numerous girls and their fathers. “Some of these parents are trying to hide behind the argument that they have married off these girls, which is a blatant lie and illegal ab initio as no one has the right to marry 12 yrs old girls,” Gupta wrote. “We have good reason to believe that these girls have been sold, or disposed of with the intent that they shall be used for the purpose of prostitution and for illicit intercourse and other unlawful purposes.”

Early on, Sahi said, the Bihar government did not provide teaching or residential staff, and Apne Aap’s staff took charge of all duties. The girls that the organisation managed to retain were taught the state government syllabus up to the eighth standard. “After they passed eighth, many of them were married off,” Sahi said. “Some girls were put into prostitution on their return.” Sahi added that Apne Aap “ensured a college education for 19 girls.”