Why Is the West So Powerful— And So Peculiar? 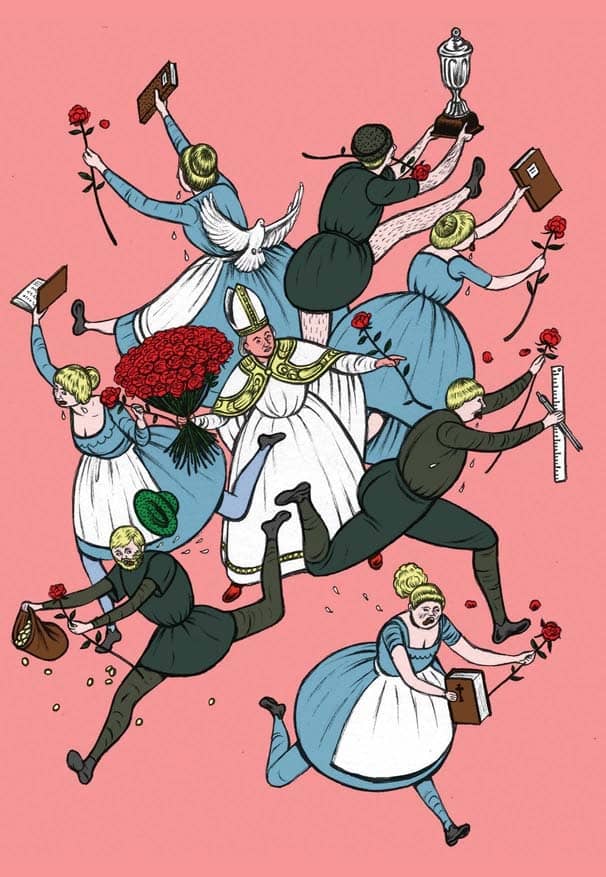 Cultural evolutionary theory has a startling answer: a marriage policy first pursued by the Catholic Church a millennium and a half ago.

Around 597 a.d., Pope Gregory I dispatched an expedition to England to convert the Anglo-Saxon king of Kent and his subjects. The leader of the mission, a monk named Augustine, had orders to shoehorn the new Christians into Church-sanctioned marriages. That meant quashing pagan practices such as polygamy, arranged marriages (Christian matrimony was notionally consensual, hence the formula “I do”), and above all, marriages between relatives, which the Church was redefining as incest. Augustine wasn’t sure who counted as a relative, so he wrote to Rome for clarification. A second cousin? A third cousin? Could a man marry his widowed stepmother?

He could not. Pope Gregory wrote back to rule out stepmothers and other close kin not related by blood—another example was brothers’ widows. He was lax about second and third cousins; only the children of aunts and uncles were off- limits. By the 11th century, however, you couldn’t get engaged until you’d counted back seven generations, lest you marry a sixth cousin. The taboo against consanguineous family had expanded to include “spiritual kin,” who were, mostly, godparents. (It went without saying that you had to marry a Christian.) Pope Gregory and Augustine’s letters document a moment in a prolonged process—begun in the fourth century— in which the Church clamped down, and intermittently loosened up, on who could marry whom. Not until 1983 did Pope John Paul II allow second cousins to wed.

You might assume that this curious story of how the Church narrowed the criteria for marriage ability would be relegated to a footnote—a very interesting footnote, to be sure—but Joseph Henrich puts the tale at the center of his ambitious theory-ofeverything book, The WEIRDest People in the World: How the West Became Psychologically Peculiar and Particularly Prosperous. Consider this the latest addition to the Big History category, popularized by best sellers such as Jared Diamond’s Guns, Germs, and Steel: The Fates of Human Societies and Yuval Noah Harari’s Sapiens: A Brief History of Humankind. The outstanding feature of the genre is that it wrangles all of human existence into a volume or two, starting with the first hominids to rise up on their hind legs and concluding with us, cyborgish occupants of a networked globe. Big History asks Big Questions and offers quasi- monocausal answers. Why and how did humans conquer the world? Harari asks. Cooperation. What explains differences and inequalities among civilizations? Diamond asks. Environment, which is to say, geography, climate, flora and fauna. Henrich also wants to explain variation among societies, in particular to account for the Western, prosperous kind.

Henrich’s first cause is culture, a word meant to be taken very broadly rather than as referring to, say, opera. Henrich, who directs Harvard’s Department of Human Evolutionary Biology, is a cultural evolutionary theorist, which means that he gives cultural inheritance the same weight that traditional biologists give to genetic inheritance. Parents bequeath their DNA to their offspring, but they—along with other influential role models—also transmit skills, knowledge, values, tools, habits. Our genius as a species is that we learn and accumulate culture over time. Genes alone don’t determine whether a group survives or disappears. So do practices and beliefs. Human beings are not “the genetically evolved hardware of a computational machine,” he writes. They are conduits of the spirit, habits, and psychological patterns of their civilization, “the ghosts of past institutions.”

One culture, however, is different from the others, and that’s modern WEIRD (“Western, educated, industrialized, rich, democratic”) culture. Dealing in the sweeping statistical generalizations that are the stock-in-trade of cultural evolutionary theorists—these are folks who say “people” but mean “populations”— Henrich draws the contrasts this way: Westerners are hyper-individualistic and hyper-mobile, whereas just about everyone else in the world was and still is enmeshed in family and more likely to stay put. Westerners obsess more about personal accomplishments and success than about meeting family obligations (which is not to say that other cultures don’t prize accomplishment, just that it comes with the package of family obligations). Westerners identify more as members of voluntary social groups—dentists, artists, Republicans, Democrats, supporters of a Green Party—than of extended clans.

In short, Henrich says, they’re weird. They are also, in the last four words of his acronym, “educated, industrialized, rich, democratic.” And that brings us to Henrich’s Big Question, which is really two linked questions. Starting around 1500 or so, the West became unusually dominant, because it advanced unusually quickly. What explains its extraordinary intellectual, technological, and political progress over the past five centuries? And how did its rise engender the peculiarity of the Western character?

As of late antiquity, Europeans still lived in tribes, like most of the rest of the world. But the Church dismantled these kinbased societies.