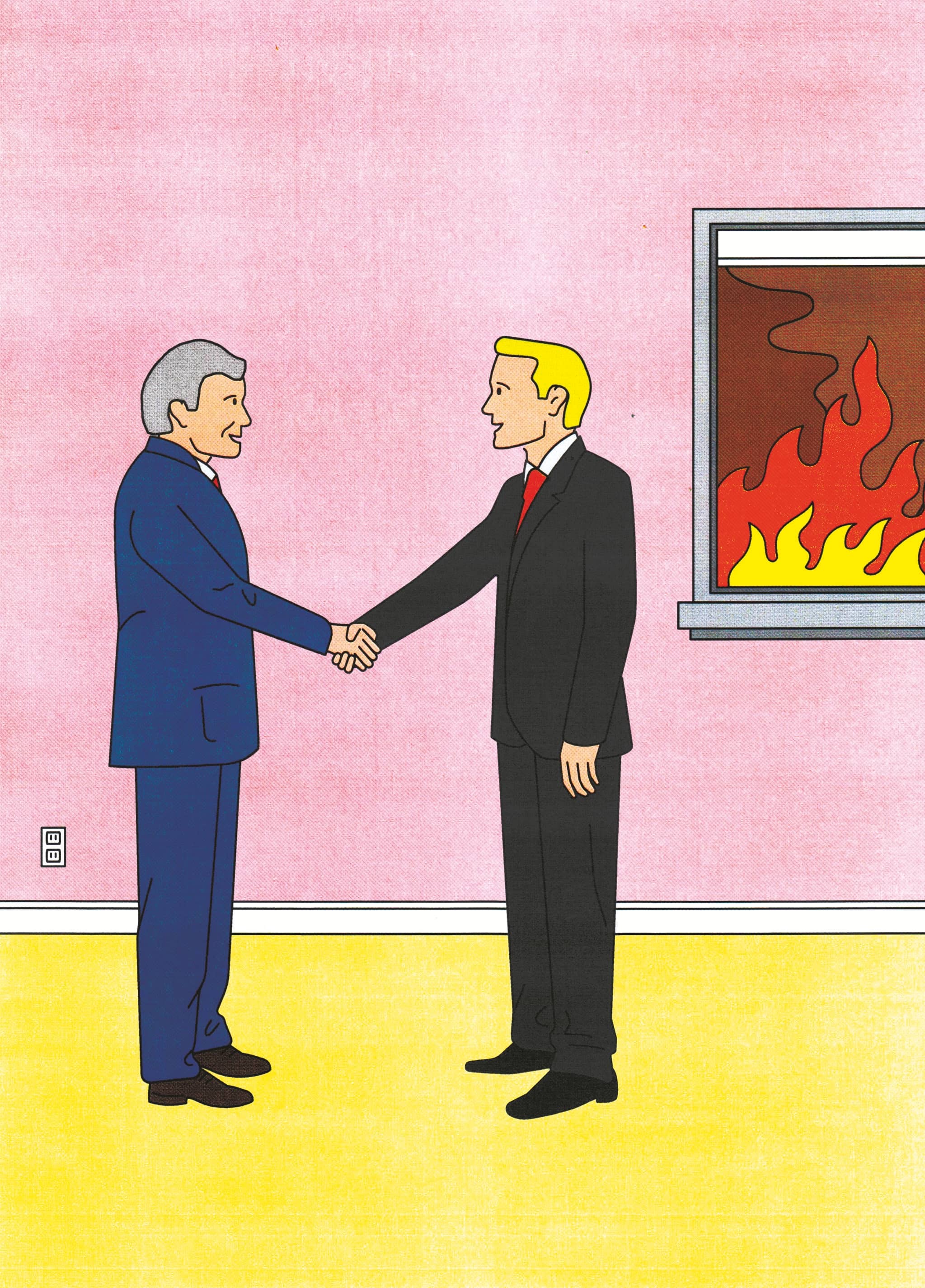 The U.S. banking system could be on the cusp of calamity. This time, we might not be able to save it.

After months of living with the coronavirus pandemic, American citizens are well aware of the toll it has taken on the economy: broken supply chains, record unemployment, failing small businesses. All of these factors are serious and could mire the United States in a deep, prolonged recession. But there’s another threat to the economy, too. It lurks on the balance sheets of the big banks, and it could be cataclysmic. Imagine if, in addition to all the uncertainty surrounding the pandemic, you woke up one morning to find that the financial sector had collapsed.

You may think that such a crisis is unlikely, with memories of the 2008 crash still so fresh. But banks learned few lessons from that calamity, and new laws intended to keep them from taking on too much risk have failed to do so. As a result, we could be on the precipice of another crash, one different from 2008 less in kind than in degree. This one could be worse.

The financial crisis of 2008 was about home mortgages. Hundreds of billions of dollars in loans to home buyers were repackaged into securities called collateralized debt obligations, known as CDOs. In theory, CDOs were intended to shift risk away from banks, which lend money to home buyers. In practice, the same banks that issued home loans also bet heavily on CDOs, often using complex techniques hidden from investors and regulators. When the housing market took a hit, these banks were doubly affected. In late 2007, banks began disclosing tens of billions of dollars of subprime-CDO losses. The next year, Lehman Brothers went under, taking the economy with it.

The federal government stepped in to rescue the other big banks and forestall a panic. The intervention worked—though its success did not seem assured at the time—and the system righted itself. Of course, many Americans suffered as a result of the crash, losing homes, jobs, and wealth. An already troubling gap between America’s haves and have-nots grew wider still. Yet by March 2009, the economy was on the upswing, and the longest bull market in history had begun.

To prevent the next crisis, Congress in 2010 passed the Dodd-Frank Act. Under the new rules, banks were supposed to borrow less, make fewer long-shot bets, and be more transparent about their holdings. The Federal Reserve began conducting “stress tests” to keep the banks in line. Congress also tried to reform the credit-rating agencies, which were widely blamed for enabling the meltdown by giving high marks to dubious CDOs, many of which were larded with subprime loans given to unqualified borrowers. Over the course of the crisis, more than 13,000 CDO investments that were rated AAA—the highest possible rating—defaulted.

The reforms were well-intentioned, but, as we’ll see, they haven’t kept the banks from falling back into old, bad habits. After the housing crisis, subprime CDOs naturally fell out of favor. Demand shifted to a similar— and similarly risky— instrument, one that even has a similar name: the CLO, or collateralized loan obligation. A CLO walks and talks like a CDO, but in place of loans made to home buyers are loans made to businesses— specifically, troubled businesses. CLOs bundle together so-called leveraged loans, the subprime mortgages of the corporate world. These are loans made to companies that have maxed out their borrowing and can no longer sell bonds directly to investors or qualify for a traditional bank loan. There are more than $1 trillion worth of leveraged loans currently outstanding. The majority are held in CLOs.

I was part of the group that structured and sold CDOs and CLOs at Morgan Stanley in the 1990s. The two securities are remarkably alike. Like a CDO, a CLO has multiple layers, which are sold separately. The bottom layer is the riskiest, the top the safest. If just a few of the loans in a CLO default, the bottom layer will suffer a loss and the other layers will remain safe. If the defaults increase, the bottom layer will lose even more, and the pain will start to work its way up the layers. The top layer, however, remains protected: It loses money only after the lower layers have been wiped out.

Unless you work in finance, you probably haven’t heard of CLOs, but according to many estimates, the CLO market is bigger than the subprime-mortgage CDO market was in its heyday. The Bank for International Settlements, which helps central banks pursue financial stability, has estimated the overall size of the CDO market in 2007 at $640 billion; it estimated the overall size of the CLO market in 2018 at $750 billion. More than $130 billion worth of CLOs have been created since then, some even in recent months. Just as easy mortgages fueled economic growth in the 2000s, cheap corporate debt has done so in the past decade, and many companies have binged on it.

Despite their obvious resemblance to the villain of the last crash, CLOs have been praised by Federal Reserve Chair Jerome Powell and Treasury Secretary Steven Mnuchin for moving the risk of leveraged loans outside the banking system. Like former Fed Chair Alan Green span, who downplayed the risks posed by subprime mortgages, Powell and Mnuchin have downplayed any trouble CLOs could pose for banks, arguing that the risk is contained within the CLOs themselves.

These sanguine views are hard to square with reality. The Bank for International Settlements estimates that, across the globe, banks held at least $250 billion worth of CLOs at the end of 2018. Last July, one month after Powell declared in a press conference that “the risk isn’t in the banks,” two economists from the Federal Reserve reported that U.S. depository institutions and their holding companies owned more than $110 billion worth of CLOs issued out of the Cayman Islands alone. A more complete picture is hard to come by, in part because banks have been in consistent about reporting their CLO holdings. The Financial Stability Board, which monitors the global financial system, warned in December that 14 percent of CLOs—more than $100 billion worth—are unaccounted for. 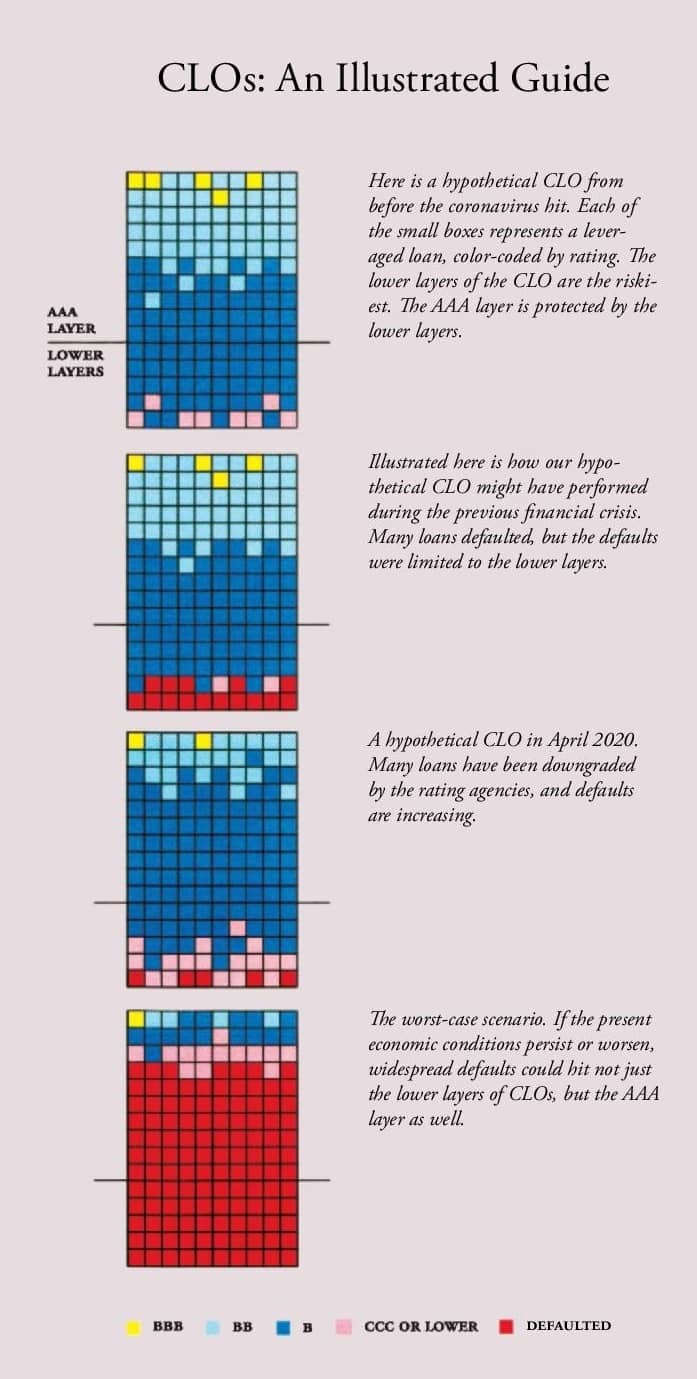 I have a checking account and a home mortgage with Wells Fargo; I decided to see how heavily invested my bank is in CLOs. I had to dig deep into the footnotes of the bank’s most recent annual report, all the way to page 144. Listed there are its “available for sale” accounts. These are investments a bank plans to sell at some point, though not necessarily right away. The list contains the categories of safe assets you might expect: U.S. Treasury bonds, municipal bonds, and so on. Nestled among them is an item called “collateralized loan and other obligations”—CLOs. I ran my finger across the page to see the total for these investments, investments that Powell and Mnuchin have asserted are “outside the banking system.”