The Sculptor Who Made Art Move 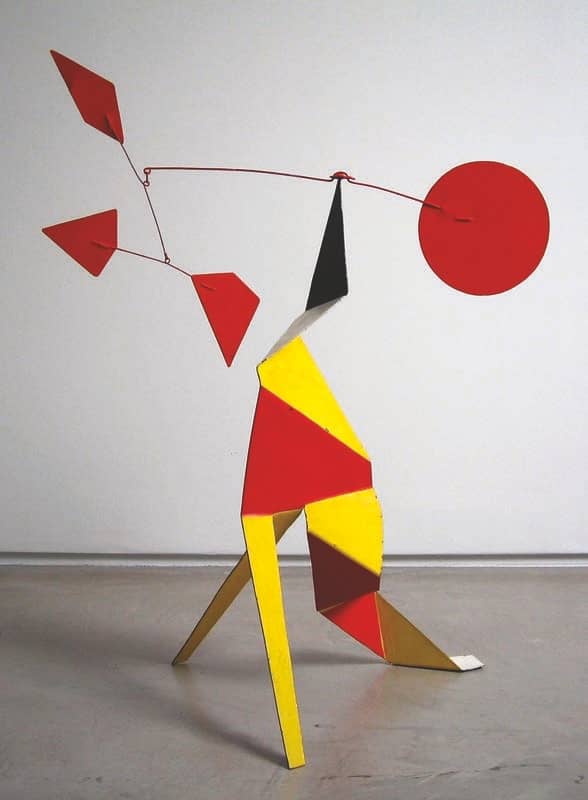 How Alexander Calder gave objects a life of their own

If Alexander Calder were alive to visit the kids’ department of Pottery Barn or West Elm today, he would probably feel deeply torn, which tells you a lot about America’s best-known sculptor. He might well say that the shelves of knockoff mobiles “nauseate” him, as he did when DIY mobile-making guides started proliferating among craft hobbyists in the 1950s. Gimmicky popularizing of his work pained him. Then again, he would likely take real pleasure in discovering that his greatest sculptural innovation has found new life as an enchanting crib toy.

Calder, born in a suburb of Philadelphia in 1898, came of age at a time when prominent artists and thinkers had begun to consider play a serious pastime. “Everything good in life—love, nature, the arts, and family jests—is play,” Vladimir Nabokov declared in 1925. By the last decade of Calder’s life—he died in 1976—the view had acquired prescriptive authority. “It is in playing and only in playing,” the British psychoanalyst Donald Winnicott argued, “that the individual child or adult is able to be creative and to use the whole personality, and it is only in being creative that the individual discovers the self.”

It would be hard to find a more apt embodiment of that vision than Calder, who took a professional approach to play beginning in his 20s, as a designer of push-and-pull toys. Many of the same lively adjectives are commonly used to describe both the man and his art: playful, charming, colorful, big, unpretentious, brilliant. Yet his work also reflected his “whole personality,” not simply his high-spirited temperament: Calder’s sculptures are the products of a notably eclectic education. He was a student first of engineering and later of the modernist-art movements— surrealism, Dadaism, neoplasticism— that he encountered in Paris, where he lived on and off for five decades, starting in the 1920s.

A visit to the Dutch painter Piet Mondrian’s Paris studio in 1930 awakened Calder to the possibilities of abstract art, a concept he’d only begun to consider. Seeing the artist’s grids of primary-colored rectangles, he felt like a “baby being slapped to make his lungs start working,” he wrote later. Mondrian described his work as “fast” because it stimulated a viewer’s retinas to rhythmically track its lines and colors, an experience that gave Calder the idea to make his work move too. And from the Spanish painter Joan Miró, whom he met in 1928, Calder may have plucked the petallike forms that adorned many of the new rotating sculptures he began creating in 1931. Another friend he made in Paris, Marcel Duchamp, coined the term mobile to describe the new art form.

But the influence of Calder’s contemporaries shouldn’t undercut the originality of the artist’s vision. That is the argument Jed Perl makes in his exhaustive two-volume biography, Calder, which now concludes with The Conquest of Space: The Later Years: 1940–1976. (The Conquest of Time: The Early Years: 1898–1940 came out in 2017.) A contributing art critic for The New York Review of Books, Perl offers a sweeping dismissal of previous assessments of Calder, particularly those that emphasized the lighthearted and derivative dimensions of his work. “All the critics of Calder’s art, from the philistines to the intellectuals, missed the point,” he announces, a dose of hyperbole that might prompt some readers to ask just how clear-eyed this reverent guide can be about his subject. But Perl’s devotion has fueled a passionate, erudite, and scrupulously researched reckoning with one of the 20th century’s most exciting artists. If some of the minutiae packed into nearly 1,400 pages induce yawns (Calder found one ship voyage to Europe “uneventful, very smooth,” and his fellow passengers rather dull), they don’t impede Perl’s case for Calder’s seriousness and stature.