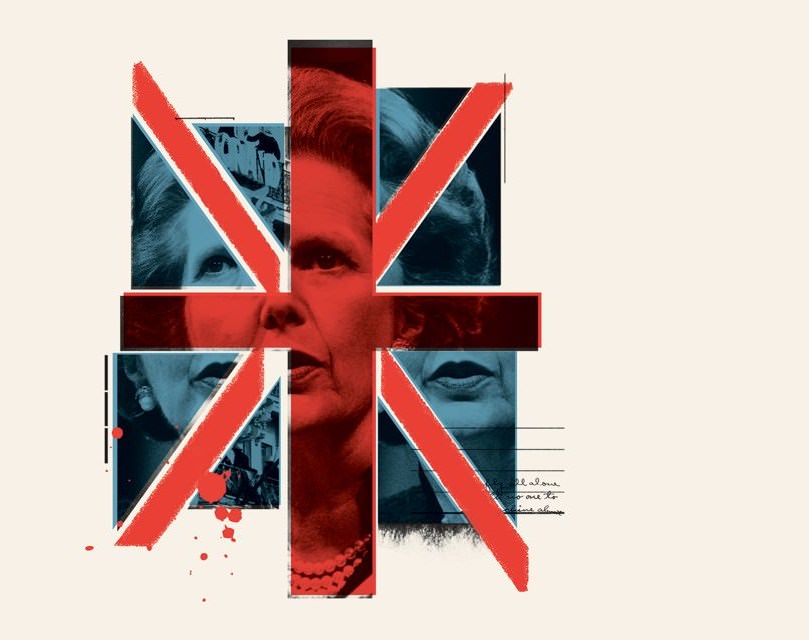 Why distorting Mrs. T. has been a popular literary pastime.

Margaret Thatcher, though a prodigious consumer of economics textbooks and briefing documents, and a frequent spouter of Bible passages, has been widely considered deaf to literature. Even a besotted admirer like the novelist Anthony Powell found it hard to take her reading seriously. After Thatcher told him that Dostoyevsky’s novel The Possessed had helped her understand the pressing problems of the day, he wondered in his journal “when, how, she got round to this. Did she read the novel, see its contemporary relevance herself, or was that pointed out to her by someone? I fear probably the latter.” (His skepticism was well founded: The someone was apparently the journalist Malcolm Muggeridge.) In any case, reducing a classic novel to a kind of political how-to guide plays right into the prevailing image of Thatcher among the literary set: someone who, in the writer Jonathan Raban’s words, “doesn’t appreciate doubleness, contradictions, paradox, irony, ambiguity.” One famous anecdote has her pulling out a copy of Hayek’s The Constitution of Liberty at a meeting and pronouncing, “This is what we believe.”

Novelists, in turn, invite the charge of being blinkered about Margaret Thatcher, undisposed to see her except in melodramatic terms. As D. J. Taylor notes in his new book, The Prose Factory: Literary Life in England Since 1918, she has been treated as “an almost mythical figure … for whom the techniques of realist fiction seem sadly inadequate.” Novels about Thatcherism tend toward satire and even farce—Jonathan Coe’s What a Carve Up! being perhaps the classic instance. Novels portraying Thatcher herself veer toward Gothic fantasy: the prime minister as monster, stripped of her name—in The Satanic Verses, she is Mrs. Torture—and sometimes of more than that. In Ian McEwan’s The Child in Time, we are told about “a convention in the higher reaches of the Civil Service never to reveal, by the use of personal pronouns or other means, any opinion as to the gender of the prime minister.” In The Line of Beauty, the winner of the 2004 Man Booker Prize, Alan Hollinghurst achieved a breakthrough, portraying Thatcher as a lightning rod and exploring precisely the extremities of response to which his emotive predecessors had succumbed.