The Beating Pulse of Donald Judd 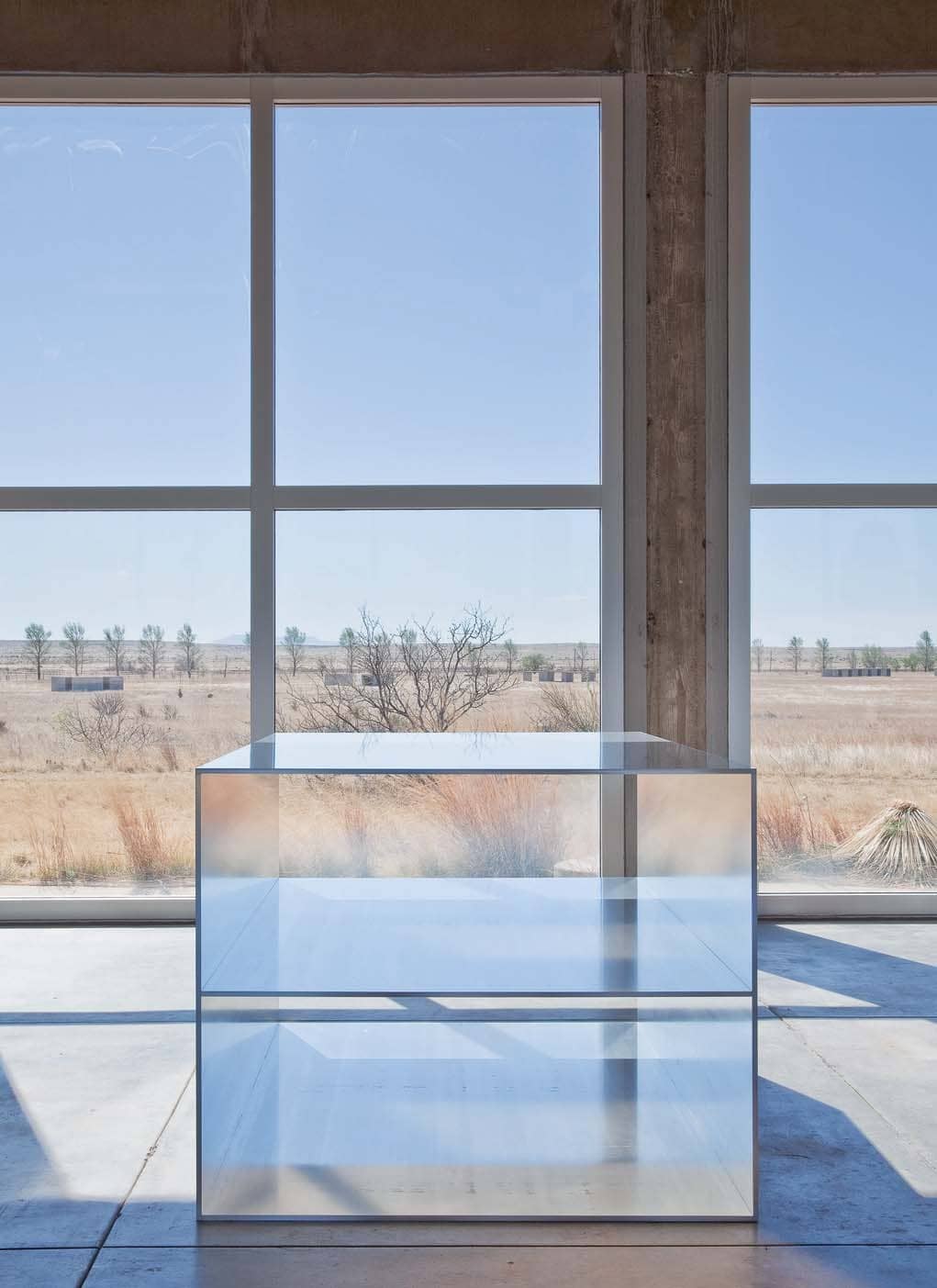 I always thought his work was intimidatingly austere, until I discovered the plenitude at its core.

Bringing my toddler to the Donald Judd retrospective at the Museum of Modern Art when it opened last winter forced me to recognize the ways Judd’s objects resemble playground equipment: the diagonal ladder of red-painted wood with its single purple rod, or the red-enameled iron tube that slyly evoked (at least to my toddler-adjacent eyes) an empty kiddie pool. When we visited shortly after the show opened in February, my daughter wanted to climb on all the objects— or up them, or through them, or over them. The objects. I had trained myself not to call them sculptures, because Judd himself hadn’t thought of them that way. And neither did my toddler! She wanted to crawl through the silver aluminum boxes lined with blue Plexiglas, to bang her tiny fists against a green-lacquered galvanized- iron slab. The one thing she didn’t want to do was stay in her stroller.

Eternally intimidated by the stark, imposing presence of Judd’s pieces, I was surprised to discover their fragility—that they are easily damaged, and have often been poorly protected. In an essay about Judd’s vexed relationship with museums that appears in the exhibition catalog, Ann Temkin, the show’s curator, writes:

Once his works entered the public realm, their flat tops and boxlike forms were often read as invitations to rest an elbow or set down a purse. Their rectilinear structures tempted children and adults alike, whether to squish their bodies between elements of a wall progression, climb inside a channel piece, or crouch beneath a single stack. Unbeknownst to most visitors, the surfaces of the materials they were touching—Plexiglas, aluminum, galvanized iron—were as fragile as parchment and often irreparable.

As my daughter and I made our way through four huge rooms—displaying work that spanned the three decades of Judd’s career, which found its footing in the mid-1960s and ended with Judd’s sudden death in 1994—I cringed at the thought of her splintering one of his plywood boxes with her tiny blue Velcrofastened sneakers. Yet something about Judd’s art also made me want to see its perfect lines dented, its stillness disrupted, its self- possession rattled; his work often made me feel inadequate and uncomprehending, vaguely excluded.

When Judd emerged as a central figure in the downtown New York art scene in the late ’60s, people celebrated his art and were confounded by it. He broke away from abstract painting to start creating three-dimensional objects that were embraced by many critics as part of an emerging minimalist movement. One crucial milestone in his career was his appearance in the 1966 “Primary Structures” group exhibition at the Jewish Museum in New York, along with his contemporaries Sol LeWitt, Dan Flavin, and Robert Morris, often understood as “minimalist” as well. (The poet John Ashbery’s review in ARTnews was titled “Young Masters of Understatement.”) But Judd himself always rejected the term minimalist, which seemed like another form of minimalism: His art was so minimalist that even the label was excess weight. If you clung to that category, you had already missed the point.

I’ll confess, however, that minimalist was the word I reached for the first time I stood in front of his art—an installation of 15 plywood boxes at Dia: Beacon labeled, simply, Untitled (1976). Its refusal of a title (most of his work is untitled) struck me as yet another act of withholding. The installation seemed elusive and aloof, as if it were responding to my hunger to understand its meaning with a reticence close to silence. These boxes weren’t figurative. They weren’t narrative. They weren’t embellished. They weren’t even pretty. What were they, exactly? They were made of blond wood with a visible grain. Some were closed. Some were open. Others had recessed tops, like little roof decks, which made me picture tiny people lounging on top of them for summer barbecues, eating tiny hot dogs, and plunging into tiny hot tubs. Tiny hot tubs! I knew this imagined landscape wasn’t the “right” reaction to be having.

I couldn’t look at these plywood boxes without feeling reprimanded by the hypothetical specter of a more sophisticated eye than mine—a viewer who could appreciate Judd’s art better, who didn’t crave the entry point of narrative or figurative representation. The people satisfied by Judd’s spare boxes were probably also people who might eat a single peach for dessert while listening to obscure electronica; I’m someone who wants to inhale an entire carton of ice cream while being flooded by the swelling riffs of a cheesy pop song. I’ve always felt tainted by this desire for excess in all forms, for naked sentiment and surging sugar and the aesthetic comfort food of legible stories. Which is all to say: I was convinced that I had failed Judd’s work by looking at it and feeling nothing, or by assuming that feeling something was the only way to have a meaningful experience with art.

In retrospect, I wonder if my conviction that I’d somehow failed Judd’s work stemmed from an oblique kind of transference— from the way I experienced his work as the artistic equivalent of an aloof father figure, detached and opaque. I was alienated by what felt like a particular maleness at its core; its simplicity felt like withholding because it brought me back to my childhood dinner table, where I sat across from my father trying to decode his spare, inscrutable utterances— always grounded in logic and precision, rather than sentiment. It was as if Judd’s art had become another impassive male face in which I was hunting for an aperture; as if I needed to devote myself fully—all my intelligence, all my stamina—to understanding what lay behind its impenetrable facades. My stubborn focus on emotion was missing the point.

When asked by the critic Bruce Glaser in 1964, “Are you suggesting an art without feeling?,” Judd replied that he was specifically resisting a certain “kind of feeling,” by which he meant an artist’s “particular feeling at the time.” Judd’s work was instead invested in the formal existence of the object itself. “Already convinced that representational art was a thing of the past,” Roberta Smith wrote in her obituary,

he became increasingly sure that even abstract art could not presume to describe human emotion. Instead, he began to believe in the autonomy of the art object, namely that the object’s purpose was not to serve as a metaphor for human life, but to have a strong formal life of its own, something he frequently called specificity.

At MoMA, my daughter’s eagerness to touch Judd’s work—to bang it, climb it, crawl beneath it—was attuned to this “strong formal life.” Driven by primal material curiosity, she was spellbound by the visceral force field of his art, un distracted by a search for embedded meaning or latent feeling, an unwitting, squirming disciple of his famous pronouncement that “a work needs only to be interesting.” While I’d understood his work as stiflingly serious, she approached it with playful desire, sensing that it might want to give us something, that the art and its witnesses (the two of us!) might be engaging in an experiment together.

This tension—between understanding Judd’s art as reserved minimalism, and pushing back against that framing to excavate its exploratory vitality—recurs across the long arc of critical responses to his work. Critics love disagreeing about Judd, and they particularly love disagreeing about the question of his restraint. Early in his career, his work was featured in a group exhibition at Stockholm’s Moderna Museet exploring “space, silence, stillness, even emptiness and negation as means of expression,” and many critics saw his breakout 1968 solo exhibition at the Whitney as a high-water mark in the rising minimalist movement. But even then others balked at the label; the critic Elizabeth C. Baker praised an “over-all quality of sumptuousness” at the Whitney solo show, disputing the popular misunderstanding of Judd’s work as “baffling, impassive, harsh”; the critic Hilton Kramer called him a “closet hedonist.”