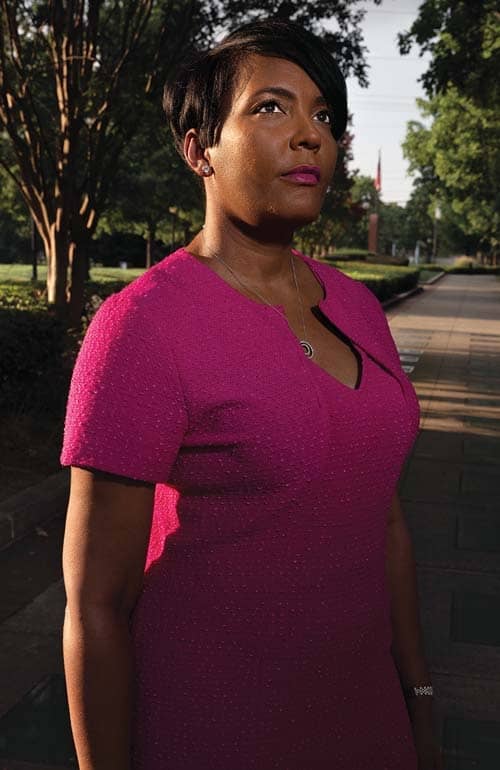 Steven L .Reed smooths his gray suit jacket before he grips the podium. The mayor of Montgomery, Alabama, Reed has seen the corona virus tear through his city faster than anywhere else in the state. The hospitals have run out of beds; medical professionals are pleading for help. If Reed had had his way, he would have issued a stay-at-home order to stamp this out, but he’s limited by the state constitution, which grants the necessary authority only to the governor. So, on June 16, he is standing before eight city-council members with a simple plea: Require every one to wear a mask.

“The longer we keep this going, the more we’re going to hurt ourselves,” Reed says. “Is it that inconvenient to tell people to wear masks?” The ordinance he’s requesting would carry a small fine if disobeyed. But half of his audience is skeptical. Wouldn’t a public-service announcement be just as good? one councilor asks. Reed responds that providing people with accurate public-health information is important but that “some regulation” is necessary to slow the spread of the virus.

One by one, medical professionals and Montgomery residents approach the microphone and testify about the need for masks. More than 90 percent of the people in the intensive-care unit at the city’s largest hospital are Black. For the most at-risk groups, one man says, mask wearing is not a symbolic political issue but a matter of life and death. He tugs at his mask and fiddles with his shirt. He’s lost six relatives to the virus. His brother is in the hospital dying. “The question on the table,” he says, “is: Do Black lives matter?”

Since the death of George Floyd, the whole country has been confronting that question. But for Reed and his peers— the wave of Black Democratic mayors who have swept into southern city halls in the decade since Steve Benjamin became the first Black mayor of Columbia, South Carolina, in 2010—the question has particular political urgency. Those mayors— Keisha Lance Bottoms in Atlanta; Frank Scott Jr. in Little Rock, Arkansas; Randall Woodfin in Birmingham, Alabama; Vi Lyles in Charlotte, North Carolina; Chokwe Antar Lumumba in Jackson, Mississippi; Reed in Montgomery; and others—represent cities with large, and in some cases predominantly, Black populations. The symbolic progress these politicians embody is expressed in a collection of firsts: first Black mayor of one city, first Black woman mayor of another, youngest mayor of a third. But as they lead their cities through a national reckoning with systemic racism— amid a pandemic that has exacerbated lethal in equities— symbolism alone won’t do. Navigating through overlapping crises—and advancing the rights and living standards of their constituents—requires the full application of symbolic power combined with the canny use of the policy levers they hold as elected officials. These two sources of power are different; leaning on one can sometimes hinder the use of the other, and getting the balance right is difficult.

HE’S LOST SIX RELATIVES TO THE VIRUS. HIS BROTHER IS DYING. “THE QUESTION ON THE TABLE,” HE SAYS, “IS: DO BLACK LIVES MATTER?”

When Reed, who is 46, broke two centuries of racial precedent to become Montgomery’s first Black mayor, in 2019, thousands of the city’s residents exhaled. For most of Montgomery’s 200-year history, Reed told me, the plight of the city’s Black people— who make up roughly 60 percent of the population there— has been overlooked. The same was true in any number of cities across the South and beyond. Left unaddressed, dissatisfaction only brews. As Reed stands before the council, he’s talking about masks—but, more fundamentally, what he’s saying is that the Black people in his city are being heard.

After more than an hour of testimony, the council votes. With one member absent, it splits down the middle. Four members—three Black, one white—support the measure. Four members—all white— vote against it. The majority of the white council members can’t be convinced that masks are necessary. One Black member proposes a watered-down measure—a recommendation instead of a requirement— reasoning that it’s better to do something instead of nothing. Another Black member wonders aloud why the council seems unwilling to take decisive action on something as simple as wearing masks.

As they bicker, Reed has already made up his mind. If the city council is not going to require masks, he’ll do it himself. And he’ll deal with whatever legal or political consequences will follow later.

THE RECENT PROFUSION of Black mayors in the South is striking when you consider that, not so long ago, there weren’t any at all. In 1969, when Howard N. Lee took over as the mayor of Chapel Hill, North Carolina, he was the first Black person elected mayor of any predominantly white city in the South since Reconstruction.

“The real revolution taking place in the South must occur in the political arena,” Lee said in 1971. “The black elected official is a real symbol of black power.”