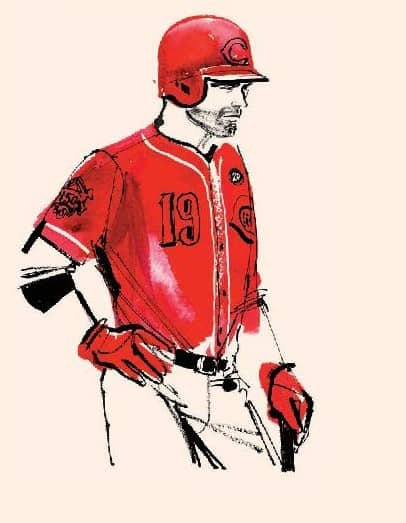 Last April, on a gorgeously sunny, relatively cool afternoon at Dodger Stadium, in Los Angeles, the Cincinnati Reds’ Joey Votto popped out to first base. Ahead in the count, he’d lunged at the ball, sending it high into foul territory, before it landed in the mitt of the first baseman. Infield flies are the lamest thing a batter can do apart from striking out, but the crowd went wild—or rather, the baseball commentators and Twitter masses did. (“This has to be a sign of the zombie apocalypse.” “The world is ending.”) Because, over the course of his 13-year Major League career, in 6,827 trips to the plate, Votto had never popped out to first. Think of a veteran opera singer who never hit a wrong note onstage, or an actor who never flubbed a line. Equally astounding, Votto had flied out to the infield—right, left, or center— only seven times since 2010, while any other Major Leaguer with the same number of trips to the plate would have done so 137 times.

Votto is considered one of the smartest hitters in baseball history, mentioned in the same breath as Ted Williams and Tony Gwynn. But Votto is now 36, and last year was his annus horribilis—his batting average was undistinguished and he had little power. Now, at an age when many athletes grudgingly accept diminishing skills, he is seeking not only to recover from his worst season ever but to answer a larger question: Can one of the great thinkers of the game out-think time? “It’s weird not playing well,” Votto told me when I visited him in February at the team’s player development complex in Goodyear, Arizona. “It bothers me.”

It must bother him, too, that he now doesn’t know when he’ll get a chance to improve on last year’s performance, though when we caught up in mid-March, he told me this wasn’t the main thing on his mind. “I’m not thinking about baseball right now, if I’m honest,” he told me a few days after MLB suspended its season indefinitely because of the coronavirus pandemic. He’d gone home to his native Toronto. “I’m just trying to take it moment by moment and look after the people closest to me.”

What does it mean to be considered the most intelligent hitter in baseball during an era when sabermetrics— popularized by Money ball, the book and the Brad Pitt movie— dominate? With team analytics departments constantly feeding players data, today’s hitter, even one who’s not aided by stolen signs and banging trash cans, knows more about what to expect from a pitcher than ever before. “Joey reads the research himself, which is why it feels like he anticipates your questions,” offers the baseball analytics writer Eno Sarris, who’s had a number of intricate conversations with Votto about the game they both love—and love to study. “He’s not willing to talk out of his butt.”

Since high school in Toronto, where he grew up the son of a sommelier mother and chef father, Votto has been a student of Ted Williams. He still takes Williams’s treatise, The Science of Hitting, on the road with him, and in an American Masters documentary about the man, Votto was the lone active player featured, shown holding the book lovingly and extolling its greatness.

When Votto tries to capture his own genius, though he’d never use that word, he speaks of having a “plan.” “Coming up with a simple answer to a complicated event—that’s my goal at every at-bat,” he said. “To have simple ideas and repeat them over and over. I’ve got my swing built, I’ve got the plan laid out, and now let’s be natural.”

That description may sound as boilerplate as the advice in a CEO’s memoir, or like the makings of a Buddhist koan (my favorite Joey-ism in the latter category: “The swing should be built around you, not you built around the swing”). But in practice, it means figuring out what kind of pitch— fastball, curveball, slider—is coming next, based on what pitches came before, and who’s throwing. It means avoiding balls out of the strike zone and also avoiding balls in the strike zone that he really can’t connect with. It means a million other small things. Teams these days will move three players to the right side of the infield to handicap left-handed hitters like Votto. In 2017, the Chicago Cubs not only shifted the infield but used a four-man outfield to try to stop him. Votto recalculated, not by going to the left, but with a hard shot so tightly tracing the right-field line that it eluded the extra manpower stacked on that side of the field. “Joey Votto right now is ungodly,” Joe Maddon, then the Cubs’ manager, marveled after the game.