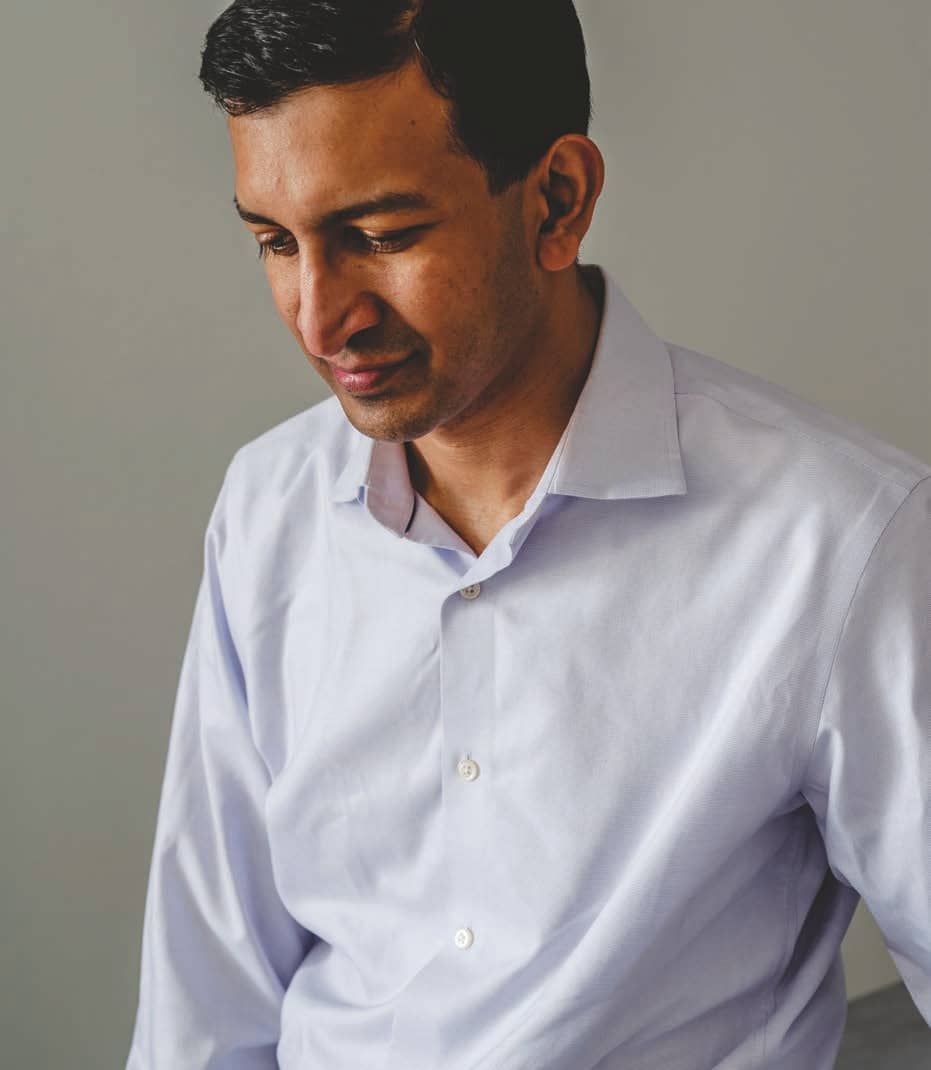 The economist whose work dispelled the myth of social mobility in the U.S. Has a plan to make it a reality.

Raj Chetty before his life began. Got his biggest break his mother, Anbu, grew up in Tamil Nadu, a tropical state at the southern tip of the Indian subcontinent. Anbu showed the greatest academic potential of her five siblings, but her future was constrained by custom. Although Anbu’s father encouraged her scholarly inclinations, there were no colleges in the area, and sending his daughter away for an education would have been unseemly.

But as Anbu approached the end of high school, a minor miracle redirected her life. A local tycoon, himself the father of a bright daughter, decided to open a women’s college, housed in his elegant residence. Anbu was admitted to the inaugural class of 30 young women, learning English in the spacious courtyard under a thatched roof and traveling in the early mornings by bus to a nearby college to run chemistry experiments or dissect frogs’ hearts before the men arrived. Anbu excelled, and so began a rapid upward trajectory. She enrolled in medical school. “Why,” her father was asked, “do you send her there?” Among their Chettiar caste, husbands commonly worked abroad for years at a time, sending back money, while wives were left to raise the children. What use would a medical degree be to a stay-at-home mother?

In 1962, Anbu married Veerappa Chetty, a brilliant man from Tamil Nadu whose mother and grandmother had sometimes eaten less food so there would be more for him. Anbu became a doctor and supported her husband while he earned a doctorate in economics. By 1979, when Raj was born in New Delhi, his mother was a pediatrics professor and his father was an economics professor who had served as an adviser to Prime Minister Indira Gandhi.

When Chetty was 9, his family moved to the United States, and he began a climb nearly as dramatic as that of his parents. He was the valedictorian of his high-school class, then graduated in just three years from Harvard University, where he went on to earn a doctorate in economics and, at age 28, was among the youngest faculty members in the university’s history to be offered tenure. In 2012, he was awarded the MacArthur genius grant. The following year, he was given the John Bates Clark Medal, awarded to the most promising economist under 40. (He was 33 at the time.) In 2015, Stanford University hired him away. Last summer, Harvard lured him back to launch his own research and policy institute, with funding from the Bill & Melinda Gates Foundation and the Chan Zuckerberg Initiative.

Chetty turns 40 this month, and is widely considered to be one of the most influential social scientists of his generation. “The question with Raj,” says Harvard’s Edward Glaeser, one of the country’s leading urban economists, “is not if he will win a Nobel Prize, but when.”

The work that has brought Chetty such fame is an echo of his family’s history. He has pioneered an approach that uses newly available sources of government data to show how American families fare across generations, revealing striking patterns of upward mobility and stagnation. In one early study, he showed that children born in 1940 had a 90 percent chance of earning more than their parents, but for children born four decades later, that chance had fallen to 50 percent, a toss of a coin.

In 2013, Chetty released a colorful map of the United States, showing the surprising degree to which people’s financial prospects depend on where they happen to grow up. In Salt Lake City, a person born to a family in the bottom fifth of household income had a 10.8 percent chance of reaching the top fifth. In Milwaukee, the odds were less than half that.

Since then, each of his studies has become a front-page media event (“Chetty bombs,” one collaborator calls them) that combines awe—millions of data points, vivid infographics, a countrywide lens—with shock. This may not be the America you’d like to imagine, the statistics testify, but it’s what we’ve allowed America to become. Dozens of the nation’s elite colleges have more children of the 1 percent than from families in the bottom 60 percent of family income. A black boy born to a wealthy family is more than twice as likely to end up poor as a white boy from a wealthy family. Chetty has established Big Data as a moral force in the American debate.

Now he wants to do more than change our understanding of America—he wants to change America itself. His new Harvardbased institute, called Opportunity Insights, is explicitly aimed at applying his findings in cities around the country and demonstrating that social scientists, despite a discouraging track record, are able to fix the problems they articulate in journals. His staff includes an eight- person policy team, which is building partnerships with Charlotte, Seattle, Detroit, Minneapolis, and other cities.

Last summer, I visited Opportunity Insights on its opening day. The offices are housed on the second floor of a brick building, above a café and across Massachusetts Avenue from Harvard’s columned Widener Library. Chetty arrived in econ-casual: a lilac dress shirt, no jacket, black slacks. He is tall and trim, with an untroubled air; he smiled as he greeted two of his longtime collaborators—the Brown University economist John Friedman and Harvard’s Nathaniel Hendren.

They walked him around, showing off the finished space, done in a modern palette of white, wood, and aluminum with accent walls of yellow and sage.

Later, after Chetty and his colleagues had finished giving a day of seminars to their new staff, I caught up with him in his office, which was outfitted with a pristine whiteboard, an adjustable- height desk, and a Herman Miller chair that still had the tags attached. The first time I’d met him, at an economics conference, he had told me he was one of several cousins on his mother’s side who go by Raj, all named after their grandfather, Nadarajan, all with sharp minds and the same long legs and easy gait. Yet of Nadarajan’s children, only Chetty’s mother graduated from college, and he’s certain that this fact shaped his generation’s possibilities. He was able to come to the United States as a child and attend an elite private school, the University School of Milwaukee. New York Raj—the family appends a location to keep them straight—came to the U.S. later in life, at age 28, worked in drugstores, and then took a series of jobs with the City of New York. Singapore Raj found a job in a temple there that allows him to support his family back in India, but means they must live apart. Karaikudi Raj, named for the town where his mother grew up, committed suicide as a teenager.

I asked Boston Raj to consider what might have become of him if that wealthy Indian businessman had not decided, in the precise year his mother was finishing high school, to create a college for the talented women of southeastern Tamil Nadu. “I would likely not be here,” he said, thinking for a moment. “To put it another way: Who are all the people who are not here, who would have been here if they’d had the opportunities? That is a really good question.”

Charlotte is one of America’s great urban success stories. In the 1970s, it was a modest-size city left behind as the textile industry that had defined North Carolina moved overseas. But in the 1980s, the “Queen City” began to lift itself up. US Airways established a hub at the Charlotte Douglas International Airport, and the region became a major transportation and distribution center. Bank of America built its headquarters there, and today Charlotte is in a dead heat with San Francisco to be the nation’s second-largest banking center, after New York. New skyscrapers have sprouted downtown, and the city boundary has been expanding, replacing farmland with spacious homes and Whole Foods stores. In the past four decades, Charlotte’s population has nearly tripled.

Charlotte has also stood out in Chetty’s research, though not in a good way. In a 2014 analysis of the country’s 50 largest metropolitan areas, Charlotte ranked last in ability to lift up poor children. Only 4.4 percent of Charlotte’s kids moved from the bottom quintile of household income to the top. Kids born into low-income families earned just $26,000 a year, on average, as adults—perched on the poverty line. “It was shocking,” says Brian Collier, an executive vice president of the Foundation for the Carolinas, which is working with Opportunity Insights. “The Charlotte story is that we are a meritocracy, that if you come here and are smart and motivated, you will have every opportunity to achieve greatness.” The city’s true story, Chetty’s data showed, is of selective opportunity: All the data-scientist and businessdevelopment-analyst jobs in the thriving banking sector are a boon for out-of-towners and the progeny of the well-to-do, but to grow up poor in Charlotte is largely to remain poor.

To help cities like Charlotte, Chetty takes inspiration from medicine. For thousands of years, he explained, little progress was made in understanding disease, until technologies like the microscope gave scientists novel ways to understand biology, and thus the pathologies that make people ill. In October, Chetty’s institute released an interactive map of the United States called the Opportunity Atlas, revealing the terrain of oppor tunity down to the level of individual neighbor hoods. This, he says, will be his microscope.