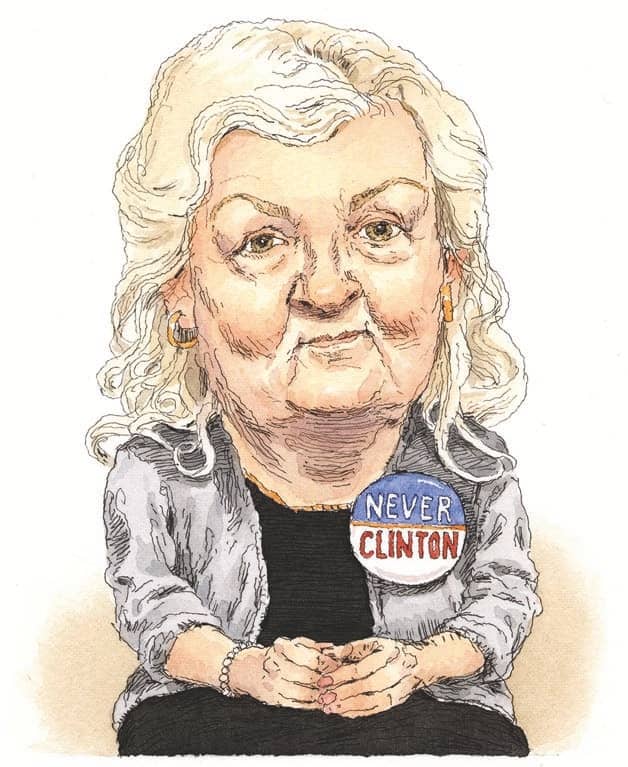 Juanita Broaddrick, who alleges that Bill Clinton raped her in 1978, has found new life as a Trump defender.

On the afternoon of July 3, the day before President Donald Trump’s rained-on Independence Day celebration (or “show of a lifetime,” depending on whose Twitter feed you look at), a small but committed group left a wharf in Washington, D.C., for a cruise on the Potomac.

In 2016, we learned that the Trump coalition was broader than many had assumed: the hold-your-nose-vote-your pocketbook one-percenters; the suburban soccer moms who, when it came down to it, were a little skittish about immigration. But the 200-some-odd passengers aboard the Spirit of Washington were emphatically not those people— this was a Trump-campaign- rally crowd in full flower. Women carried evening clutches with MAGA spelled in rhinestones; one guest was literally wrapped in the flag, the stars portion knotted at her neck, the rest wafting in the waterfront breeze like Superman’s cape. There were “Bikers for Trump,” “Cowboys for Trump,” a woman peddling 24-karat-gold-plated Trump-hologram novelty bills for $30 (proceeds, she explained, would go to defeating Representative Ilhan Omar).

And yet the woman of the hour, the person with whom just about everyone wanted to take a selfie, was a 76-year-old grandmother named Juanita with a heartshaped face and a cascade of blond curls wrangled into a ponytail; on her navy sheath, she wore a TRUMP 2020 pin no bigger than American Airlines wings. Before she even reached the check-in desk at the pier, she was approached for a picture by a statuesque woman in her early 30s wearing a sundress and a MAGA hat. “I know you from Fox News,” the woman said. Another woman told her, “I just love your Twitter—I have it open on my phone right now.” A man who said he was running for Congress against California’s Adam Schiff made sure they swapped contact info—it was clear he wanted her endorsement. Throughout the three-hour trip, she was polished and patient and gracious. At the same time, she seemed a little uncomfortable with all the fuss. When we were back on dry land, I asked how many people she thought had wanted to take a selfie with her, and she looked embarrassed. “Oh, no more than 30,” she said, undoubtedly undercounting her fans.

OUTSIDE OF TRUMP’S BASE, the name Juanita Broaddrick may stir only muddled memories—wasn’t she one of the women not named Monica Lewinsky who accused Bill Clinton of something? Paula Jones, Kathleen Willey, Gennifer Flowers—their stories can blur, but each of these women has a distinct set of allegations, and Broaddrick’s are the most serious. She says Clinton raped her in 1978, when he was the attorney general of Arkansas and she was a volunteer for his gubernatorial campaign. She did not report the alleged crime to the police; in fact, Broaddrick’s name wasn’t made public until two decades later, via a 1998 court filing in the Paula Jones case. (Clinton denied the allegations.) Even though Broaddrick did some press—once she’d been outed, she wanted the chance to share her perspective—the story didn’t stick to the Clinton legacy the way Lewinsky’s has. At the time, her claims were mostly ignored, and when acknowledged they were often dis paraged; the fact that she’d recanted in an affidavit after being subpoenaed by Jones’s lawyers was a favorite data point of critics. (Broaddrick says she denied that anything had happened with Clinton because she didn’t want to get involved in a big legal circus with Jones.)

But the worst part of the aftermath had already happened by then, Broaddrick told me. Clinton had been the leader of the free world for five long years. “Just seeing him on TV, it was constant. I don’t know who got to be the quickest, my husband or me, switching the channel,” she said. She even ended up going to an earlier church service, because at her usual one the priest had taken to asking congregants to pray for the president. “I had to sit in church, down on my knees, and be told that I am to pray for Bill Clinton.”