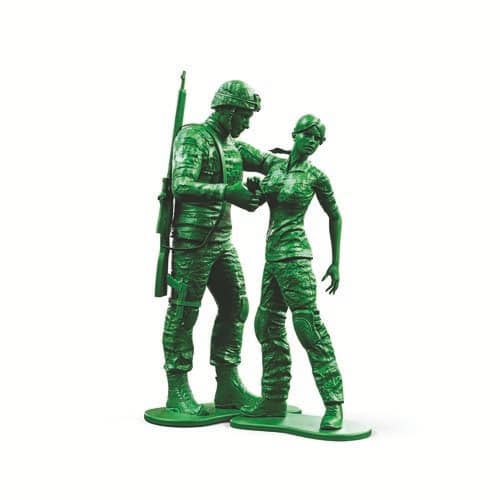 When a veteran military man gave me that advice before I left to join U.S. forces in Baghdad, I thought he meant that I needed a way to protect myself from the enemy.
By Sandra Sidi. Ilustration by Ben Fearnley

“DUCK AND COVER!” a mechanized voice screamed. The ground shook and the window rattled. I rolled from my bed to the floor of my trailer and felt for the armor I’d forgotten in my office. I lay there and sweated and swore. The voice from the loudspeaker urged me to get away from the windows. I was inside a tin can.

I crawled to the door. My hand was on the knob when I realized I was naked. The next impact knocked the air conditioner to the floor. I grabbed a light-blue cotton robe and bolted.

I raced along a row of sandbags, one hand holding the robe closed. The duck-and-cover bunkers were 100 feet away. Another series of explosions, and I hit the rocks. I was lying there, panting, when I saw a bright-yellow bunker tucked behind a row of sandbags and palm trees. I was up, running, full out. My robe fell open and flew out behind me.

Another hit. I was 20 feet away. Ten. Five. I crashed into the duck-and-cover, yanking my robe closed.

More than a dozen men squatted there and looked at me. Soldiers in military fatigues, some without shirts; contractors in cargo shorts and polos; other men in nothing but boxers. The curly hair on their chests rose and fell with their labored breathing. I should have slept in clothes, but my air conditioner was broken. The rounds hit like deep drums, but we were safe, packed together in 50 square feet of concrete.

I leaned against the wall and tried to stop my legs from shaking. Two more men in boxers joined us. A bearded, sunburned soldier stared at my feet. A half-dressed contractor took furtive looks at my neck. A marine offered me the one chair inside the bunker. “You always say thank you when we buzz you through,” he said, smiling kindly. These men went outside the wire every day, in all that danger, that heat. They were heroes. They were lonely.

The bearded soldier’s eyes met mine and held. He looked away. I pulled my robe tighter.

Finally, the attack ceased, and the sirens quieted. Back in my trailer, I dressed and slipped my embassy ID around my neck. I ran my fingers through my hair and braided it as I left the Riverside Trailer Compound, where I lived, and threaded through the rows of sandbags, then past the statue of Saddam Hussein, its half-head lying in the sand. Behind me, thick plumes of smoke rose into the sky.

I showed my badge at the palace entrance, coded into my office. I walked past flashing TV sets and translators in headphones typing at their keyboards. When I arrived at my desk, I put my head down. It was 6:30 a.m.

SOME HOURS LATER, my brown ballet flats tapped softly on the marble floor. It was 2007, and the U.S. military and State Department were working out of Saddam’s Republican Palace, in Baghdad. I walked next to a woman I’ll call Morgan, who was new and whom I’d met only the night before. At 23, she was two years older than I was. She wore her long brown hair down, though she wouldn’t for long. The men were excited about her. She carried a Bible, and I remember thinking this would help her.

Men watched as we passed beneath an ornate ceiling of red-and-green marble and rows of glittering chandeliers. The table of women was at the back of the palace dining facility—DFAC to all of us. We couldn’t see one another socially much, with our crazy work schedules, but we walked together whenever possible, and gathered for meals, six or seven of us, our trays loaded with barbecue and biscuits and salads drenched in ranch dressing. We were all happy to see Morgan. Grateful for another young woman to talk to, and perversely relieved by the addition of another female to absorb the male attention.

One of us was State Department, another a civilian analyst, and others military police, or MPs. There was a cropped-haired, soft-voiced woman in the National Guard who dreamed of starting a goat farm. Beside her was a Naval Academy graduate with shin splints and swollen ankles from carrying 80 pounds on 10-mile marches. She could barely pull her boots on. None of us had the security clearance to know what she did. I was a civilian, ferried over by third-party contractors to provide analytical support for Rear Admiral Gregory Smith, the new head of public affairs for the Multi-National Force in Iraq. This was my first job out of college.

Nicole joined us at the table. Ex-Army, she was now a doctoral student and civilian analyst collecting researchon democracy-building in Iraq. “Iraq’s had a real ass-kicking this month,” she announced. “Qahtaniya bombing toll over 500 now.”

Theresa, an MP, mused that we hadn’t figured out how to bring democracy to the Middle East, but we had managed to bring Southern fried chicken and grits. Theresa was tiny, with more positive energy than a sunflower. She did security checks on the perimeter and was Command Sergeant Major Holcomb’s assistant driver.

Two soldiers stood up, craning to get a glance at us. One pointed.

“What do the men gain from it being like this?” That was Silvana (a pseudonym), an economic analyst with several master’s degrees. She’d just filed a sexual- harassment complaint against her supervisor. The food in front of her was untouched, as it often was.

“Before I came here,” said Ann (another pseudonym), the National Guardsman with goat-farm fantasies, “I used to like them—men, I mean.”

Morgan, the newbie, said she’d hoped that she might meet a guy in Iraq, but not so much anymore.

“The odds are good,” Nicole replied, repeating one of her mantras, “but the goods are odd.”

WE CAME FOR love of country, for patriotism, for money. We came to escape debt or marriages. We came because of television—Alias and Buffy the Vampire Slayer. We came for adventure, for service. We came because someone had suggested we wouldn’t dare.

I grew up in the Washington, D.C., area, and, like many of my high-school classmates, I was shaken by the 9/11 attack on the Pentagon. Inspired to help my country, I chose political science as my major in college and studied three languages, including Arabic. Just before graduating, I was offered a job by the CIA’s Middle East desk, though I’d have to wait a year or more to get security clearance and would have little control over my assignment. I was thrilled to have been selected by the CIA, but I was also impatient and impulsive, and hadn’t given much thought to exactly what kind of work I wanted to do, or where. So when a government contractor pitched me by phone—Three weeks and you’ll be in Baghdad—I said yes.

Before I deployed, I stood in a line with other contractors and soldiers at Fort Benning, in Georgia, waiting for our physicals. The contractor in front of me wore a shirt with fake blood splattered up the side—a makeshift kidney wound—and the words I’M OKAY at the top. We started talking about his home in St. Petersburg, Florida, which is where my mother lives. We spoke of boats and streetlights and dolphins. He had gray hair and friendly lines around his eyes. He asked where I was headed.

“Twenty-two,” I lied. My birthday was five months away.

He frowned. “Have they issued you a firearm?” I shook my head. He nodded and looked out at the line of men behind us. The creases in his forehead were like rails of a train track. He turned back to me and leaned close. “A tall blonde? Get a weapon,” he said. They called his name. He looked up at the nurse and then back to me. “Get a weapon,” he repeated, and walked away.

I’d thought he meant for insurgents.

FROM THE MOMENT I stepped outside my trailer, when I stood in line at the dining hall, when I ran to the duck-and-cover, when I sat at my desk, the male soldiers watched. For some, I was the first woman without a hijab they’d seen in months. Men with enormous hands, with shoulders the width of door frames, with pistols strapped to their thighs— they watched.

I read before I went to Iraq that women made up one in 10 American soldiers in the country, but I had no idea where all those women were. The ratio seemed closer to one in 20, even 30. I counted how many women were in a room the second I entered. Twenty-nine men, three women. Sixty-three men, two women. Forty-four men, one woman: me.

I wore my hair in a tight braid. I didn’t wear shorts. I wore shoes that hid my toes. I put on sweaters in 117-degree heat. Even so, my body was everywhere.

My eyes met the other women’s when we passed in the hall, when I threw my trash away at the DFAC, when I was buzzed through the guard stations. How are you? Are you okay? Are we safe?

THE MEN GOSSIPED about us; we’d meet them in a professional capacity and find that they already knew our hometowns, our alma maters, our marital status.

They openly made bets about who was going to get pregnant, who was going to get an STD. We overheard conversations we wished we hadn’t—like after my first briefing of the admiral, when one analyst in my office observed to another, “I think she’ll do well,” and the other answered, “Just another woman trying to use her body to get ahead.” Or the four contractors who didn’t see me reading in a chair behind them as they watched a female translator for the State Department:

“Is she seeing anyone?”

“Not since they sent that old bird home.”

“Well, that ass has got to be fucked.”

“Do you know where she lives?”

WE WORKED 14-, 16-, 18-hour days. We put in as many hours as the men—we made sure of this. Women who’d been there longer offered advice: Be sure to engage with them, we were told. Don’t get too close, we were warned. Say Yes, sir. Do not ever say Yes, sir.

Some of us were married, had kids back home. One of us was quietly going through a divorce. Theresa had deployed to Iraq with her mother, also a soldier, while Ann had come with her husband, who, like her, was a staff sergeant. When we sat together in the DFAC, talking, he’d sit a few tables behind, drinking coffee, her lookout. They lived together in a married trailer and held hands while lying on the floor during shellings. Some of us were looking to date. Others couldn’t be bothered with men. A number of us were virgins.

During my breaks, I’d lie on a gold couch in the main palace entryway, which was usually empty because the side entrances were safer. I’d run my fingers over the gilt of Saddam’s chairs and along the smooth marble railings. I’d stare at the gorgeous geometric patterns of the ceiling until images emerged. My mother’s favorite blue dress. The sun striking the Potomac River, where we used to swim. My own eyes and breasts and legs and feet, misshapen and rearranged like in a cubist painting.