EXILE IN THE AGE OF MODI 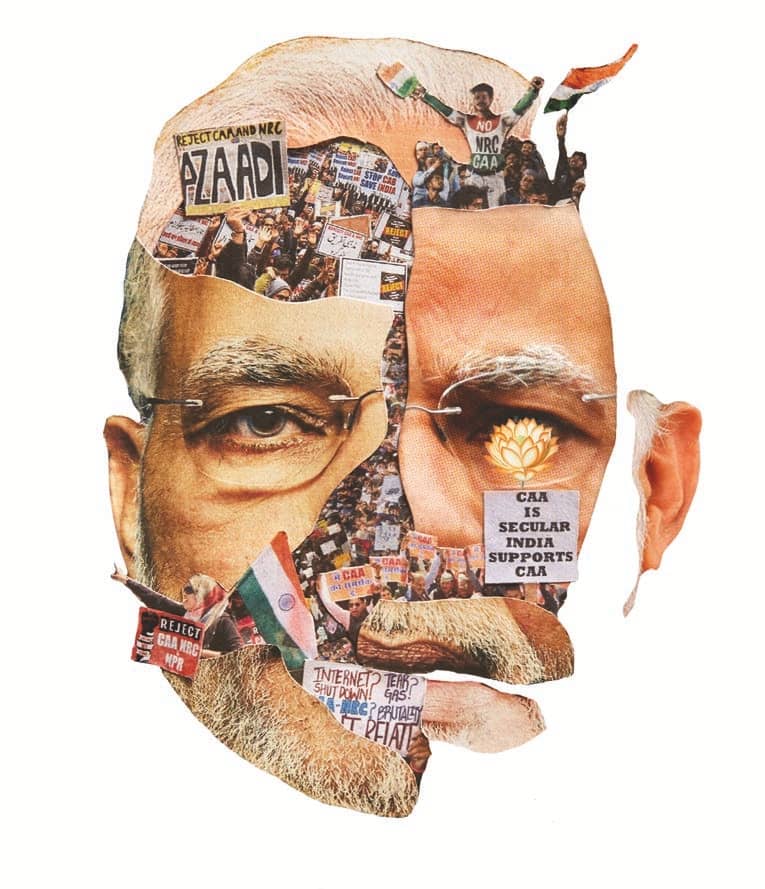 How Hindu nationalism has trampled the founding idea of my country

“You realize,” a friend wrote to me from Kolkata earlier this year, “that, without the exalted secular ‘idea’ of India … the whole place falls apart.”

India had been on the boil for weeks. On December 11, Prime Minister Narendra Modi’s Hindu-nationalist government had passed its Citizenship Amendment Act (CAA), which gave immigrants from three neighboring countries (Afghanistan, Pakistan, and Bangladesh) a path to citizenship on one condition: that they were not Muslim. For the first time in India’s long history of secularism, a religious test had been enacted. If some commentators described the CAA as “India’s first Nuremberg Law,” it was because the law did not stand alone. It worked in tandem, Indian Home Minister Amit Shah menacingly implied—in remarks he has recently tried to walk back—with a slew of other new laws that cast the citizenship of many of India’s own people into doubt. Shah, who has referred to Muslim immigrants as “termites,” spoke of a process by which the government would survey India’s large agrarian population, a significant portion of which is undocumented, and designate the status of millions as “doubtful.” The CAA would then kick into action, providing non-Muslims with relief and leaving Indian Muslims in a position where they could face disenfranchisement, statelessness, or internment. India’s Muslim population of almost 200 million, which had been provoked by Modi’s government for six years, finally erupted in protest. They were joined by many non-Muslims, who were appalled by so brazen an attack on the Indian ethos. The constitutional expert Madhav Khosla recently described the effect of the new laws as a swift movement toward “an arrangement where citizenship is centered on the idea of blood and soil, rather than on the idea of birth.” In short, an arrangement in which being Indian meant accepting Hindu dominance and actively eschewing Indian Muslims.

India was seething, but I could not go back to the country where I had grown up. I was deep in my own citizenship drama. On November 7, the Indian government had stripped me of my Overseas Citizenship of India and blacklisted me from the country where my mother and grandmother live. The pretext the government used was that I had concealed the Pakistani origins of my father, from whom I had been estranged for most of my life, and whom I had not met until the age of 21. It was an odd accusation. I had written a book, Stranger to History, and published many articles about my absent father. The story of our relationship was well known because my father, Salmaan Taseer, had been the governor of Punjab, in Pakistan, and had been assassinated by his bodyguard in 2011 for daring to defend a Christian woman accused of blasphemy.

None of this had affected my status in India, where I had lived for 30 of my 40 years. I became “Pakistani” in the eyes of Modi’s government— and, more important, “Muslim,” because religious identity in India is mostly patrilineal and more a matter of blood than faith—only after I wrote a story for Time titled “India’s Divider in Chief.” The article enraged the prime minister. “Time magazine is foreign,” he responded. “The writer has also said he comes from a Pakistani political family. That is enough for his credibility.” From that moment on, my days as an Indian citizen were numbered.

In August, I received a letter from the Home Ministry threatening me with the cancellation of my citizenship status. Then, in November, an Indian news site leaked what the government was planning to do. Within hours, the Home Ministry’s spokesperson was on Twitter, canceling my citizenship before I had been officially informed. In one stroke, Modi’s government cut me off from the country I had written and thought about my whole life, and where all the people I had grown up with still lived.