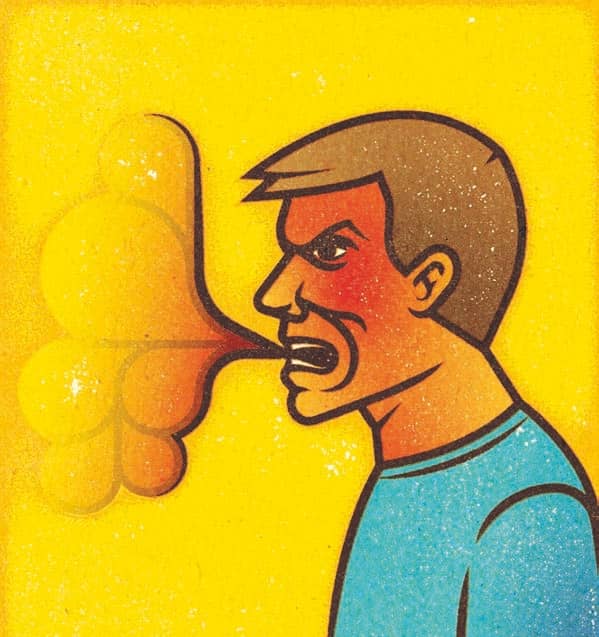 THE TOPEKA SCHOOL, Ben Lerner’s third novel, begins with a self-aware joke. Adam Gordon, Lerner’s protagonist— who also narrates Lerner’s acclaimed first novel, Leaving the Atocha Station—is sitting in a boat, talking. He’s 17, a speech-and- debate whiz and an aspiring poet living in Topeka, Kansas. It’s the middle of the night and he’s with his girlfriend, Amber, monologuing passionately about something or other, when he suddenly looks around and realizes that he’s sitting in the boat alone. She has jumped overboard and swum away, and he didn’t even notice.

Men talking—specifically young white male poets from Kansas talking— have been a fixture of Lerner’s novels. Lerner, a white male poet from Kansas, even gave the name Ben to the narrator of his second novel, 10:04, in addition to endowing him with roughly his own biography. Both earlier books feature the interior monologues and exterior dealings of Lerner-types. Both are also ironic, formally experimental, skeptical of their narrators while deeply enmeshed in their particular way of seeing the world. And both books are beautifully, exasperatingly, transcendently wordy. In Atocha Station, an extremely stoned Adam—again monologuing— marvels, before passing out, at “language becoming the experience it described.” In 10:04, Ben is the kind of guy who admits that he cried on a park bench by referring to “a mild lacrimal event.”

So it is funny and welcome to open The Topeka School and find Adam talking so fluently and intently that he doesn’t notice his girlfriend’s escape. The scene signals a return of familiar themes in Ler ner’s work—an obsession with language, a particular genus of American male subjectivity—and signals that he is confronting these subjects in a more direct and critical way. The Topeka School trains the reader’s eye on the dramas and dangers of being a person—or a nation—enthralled, bombarded, and imprisoned by rhetoric.

One of the hallmarks of Lerner’s fiction is the way that it brings a single consciousness into collision with broad sociopolitical movements. The backdrop of Atocha Station is the Iraq War, already souring globalism, America in decline. In 10:04, it is Occupy Wall Street, Hurricane Sandy, and growing questions in the Obama years about whether an American “we,” in a Whitmanesque sense, is still possible. In The Topeka School, Ler ner writes from the vantage of 2019, and from the premise that the collective is broken and common discourse has been derailed. The implicit bid of the book is that exploring myopic white male monologuists, simmering with rage in the Midwest in the late 1990s, might shed light on today’s America.

The main action of The Topeka School takes place during Adam’s final year of high school, in 1997. He is the son of two psychologists, Jonathan and Jane, who are members of a famous psychoanalytic institute called the Foundation, something like a “Mayo Clinic for the mind.” Jane’s research—which remains vague but concerns romantic relationships— has made her nationally famous. (Lerner’s mother, Harriet Lerner, a clinical psychologist, rose to national prominence after writing a book about women’s anger that sold millions of copies.) Jonathan is a therapist primarily for disaffected young white men of privilege, teenagers who seem to have everything but who suddenly turn angry, sullen, withdrawn, violent. Jonathan calls them the “lost boys.”