“At 14, I Could've Pointed Out everybody Who Would Be Dead" 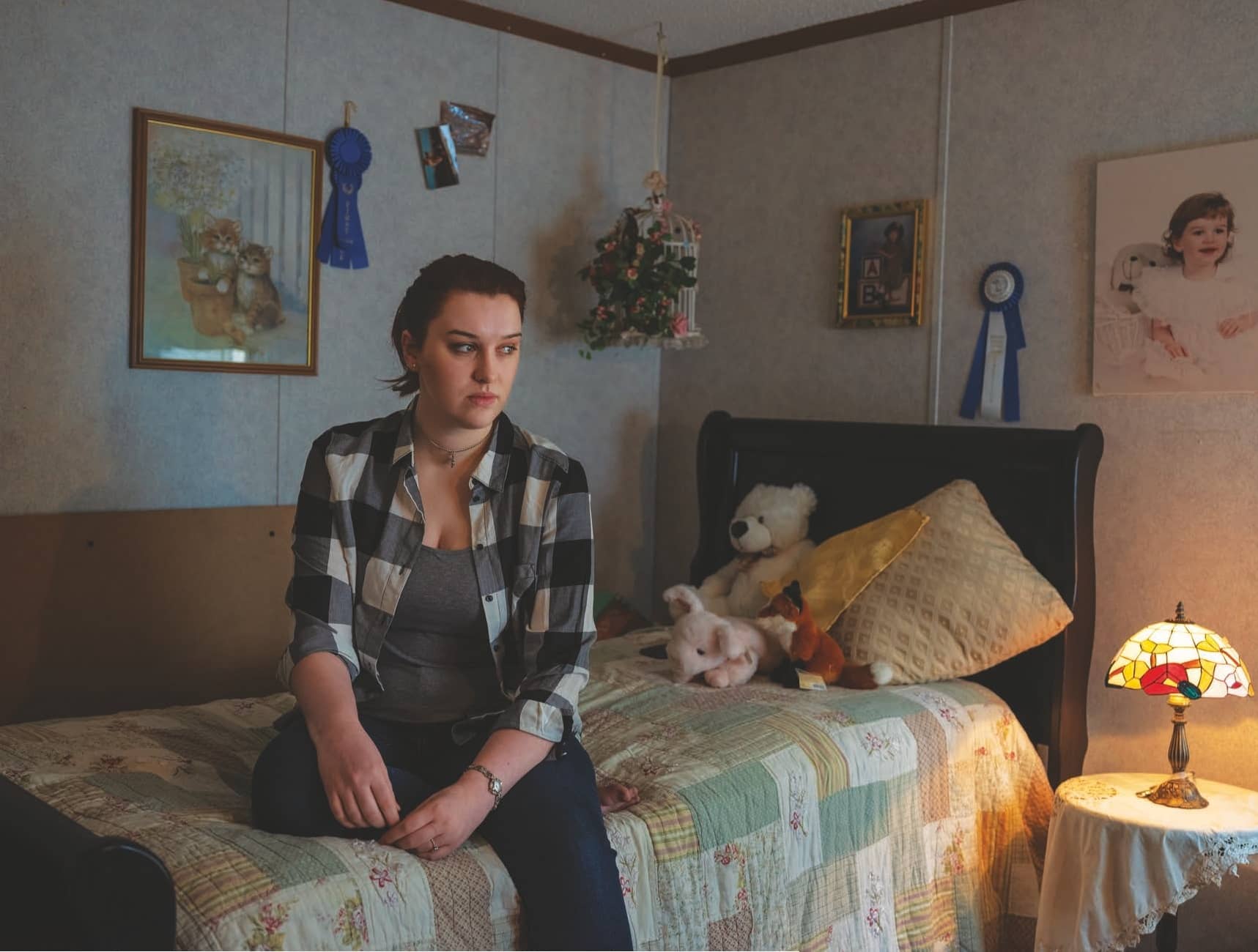 Nikki King grew up surrounded by the opioid epidemic. Now she's leading a novel and promising program to help people in remote areas.

NIKKI KING WAS 17 YEARS OLD WHEN SHE LEFT THE MOUNTAIN HOLLOW WHERE SHE WAS RAISED by her grandparents and sneaked off to the University of Kentucky under cover of darkness. It was 2009, and the advice of her late grandmother Sue King echoed in her head as she drove: Leave. Go to college. And do not let anybody from the bigger, wider world think they’re better than you.

Sue died of a heart attack in 2000, when Nikki was 9. The opioid epidemic had already begun to infiltrate eastern Kentucky by then, and in Nikki’s mind the drug problem turned into a drug crisis shortly after Sue’s death, when her family went from sleeping with the screen door unlocked to buying new doors—without glass panes, which could be knocked out by burglars. Around that time, Nikki went to a birthday party where her friend’s mom stumbled and smashed the cake into the kitchen counter. Nikki later found her passed out on the toilet, surrounded by vomit and pill bottles.

By high school, Nikki had just one friend who lived with both parents. She remembers a teacher asking her classmates what they wanted to be when they grew up.

“You mean an artist?”

“No, a drawer”—someone who draws disability checks and doctor-shops for OxyContin prescriptions. The pills could be had for next to nothing through Medicaid and then resold on the black market for $1 a milligram. It was the only future he could imagine for himself.

Nikki knew by then that both her safety and her economic fortunes lay far from Letcher County. But her widowed papaw, Curt King, wanted her to stay home. He thought that Nikki should become a nurse, and that the community college would suffice. It didn’t matter that she had a 4.0 GPA, and he had no reference point for her high ACT score. “He didn’t understand AP classes,” she told me. “He thought that meant I was slow.”

The night she ran away, Nikki stopped at an Arby’s halfway to Lexington because she was shaking too hard to drive. She’d been planning the move her entire senior year, covertly applying for scholarships and saving up $800 by working at a comic-book store. But she hadn’t ever set foot on campus, and she worried about Papaw, who was 72 and had never lived alone. She’d waited for him to fall asleep before tiptoeing out the door, and when she imagined him waking to an empty house the next morning, her shaking turned to deep, heaving sobs. Ugly crying, she calls it.

Nikki thought about going back. But then she remembered one of her last conversations with her grandmother. She had forbidden Nikki from going to a certain friend’s house. They’d both heard that the friend’s mom had become addicted to OxyContin prescribed for a back injury, and had started buying pills from a dealer when her prescription ran out. She was arrested for illegal possession, then released on probation without any treatment. When she relapsed, she feared she’d lose custody of her kids for failing a drug test. Her dealer told her she could erase the OxyContin from her system by drinking Clorox. So she did, and it killed her.

That was a turning point for Sue. She’d always urged Nikki to go away to college so she could return and use what she’d learned to help people in Appalachia. But after this mother’s death, she changed her mind. “Just go,” she told Nikki. “And don’t come back.”

In the car that night, Nikki cried so hard that she vomited. Then she wiped herself off and drove down the mountain to college.

A decade later, Nikki, now 28, has become one of the leading voices on the opioid crisis in rural America—where, some 20 years into the disaster, treatment options remain scarce even as overdose deaths continue to climb. In many rural places, neighbors turn on one another rather than placing the blame higher up—on the pharmaceutical companies that created the epidemic and the impotent regulators and bought-off politicians who enabled it. (In my reporting on the crisis, I’ve seen this attitude over and over. At a recent meeting in rural North Carolina, for instance, the head of the local Kiwanis Club objected to a plan to give people rides to treatment facilities, saying: “I think when they relapse, we should let them die and take their organs.”) 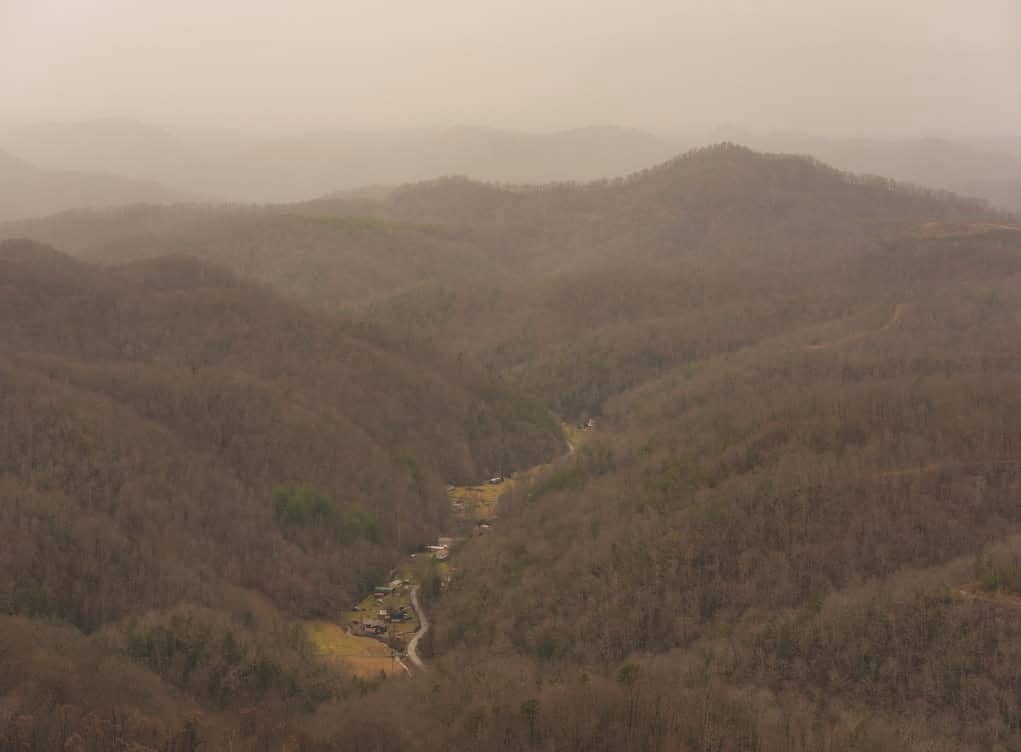 The drug-overdose epidemic has already killed over 800,000 Americans— more than have died from AIDS—but the federal government has yet to provide adequate solutions, let alone a level of funding that could stem the crisis. In the absence of help from above, Nikki has figured out a way to get treatment to people in remote, underfunded areas. The program she’s developed is still small and new, but its results are promising, and it appears to be replicable in states that have expanded Medicaid under the Affordable Care Act. Perhaps most important, it bridges the gulf between a medical culture that too often abandons people the moment they become addicted, and a legal system that incarcerates them when they can’t recover on their own. Her aim is to help people with opioid addiction, rather than just locking them up. 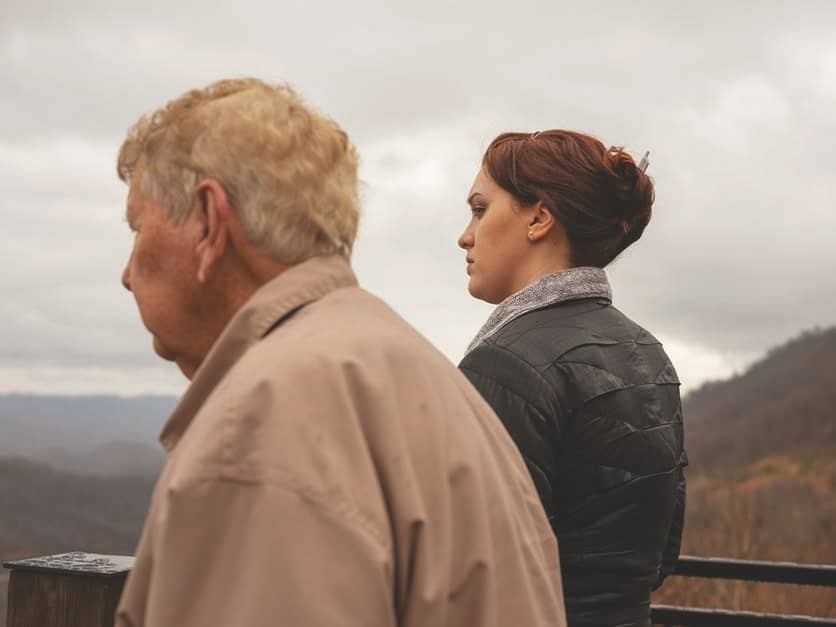 Nikki King was raised by her grandparents in Letcher County, Kentucky. Her grandfather, Curt King, is shown at left.

I first met Nikki in early 2017, after hearing about her work as a National Rural Health Association fellow at Margaret Mary Health, a community hospital in Batesville, Indiana. She was the lead data cruncher on a hospital-wide task force that had achieved a 60 percent reduction in opioid prescribing. I was writing my book Dopesick: Dealers, Doctors, and the Drug Company That Addicted America in Roanoke, Virginia, my reporting base for 30 years. When I asked Nikki to help me understand the genesis of the crisis, she suggested that we meet at Papaw’s body shop, in eastern Kentucky, not far from “Wattsburg,” as I wrote in my notes. Officially known as Whitesburg. 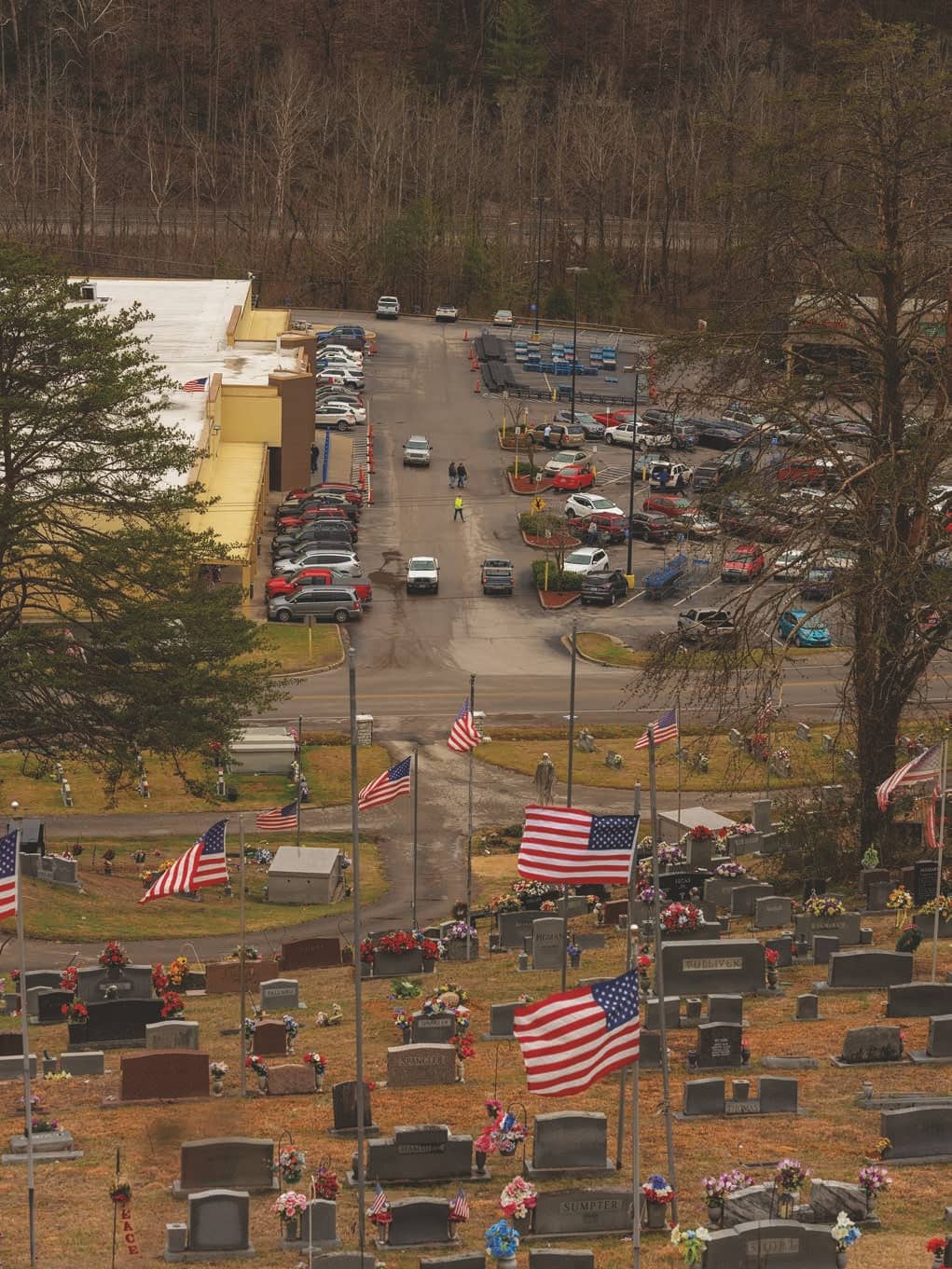 Whitesburg, Kentucky, was one of the first areas hit by the opioid crisis before it spread to the rest of the U.S.

Donald Trump had just been elected president, and J. D. Vance’s Hillbilly Elegy had topped the New York Times best-seller list. When I brought up either of those things, Nikki’s demeanor hardened, her accent thickened, and she spoke at a rapid-fire pace that most non-Appalachians would find hard to process. (Tim Putnam, the CEO of the hospital where she works, admiringly refers to these semi-rants as “going all holler.”) Nikki hated Hillbilly Elegy, she said, because Vance treated Appalachian culture as if it were his cross to bear, then turned around and used stereotypes to sell his book—“blaming the region’s problems on things like lack of thrift and a crisis of masculinity” and ignoring “the role of bigger forces in creating this miry pit of social problems.”

Nikki had been out of high school for only seven years, but already she could tick off the names of more than 20 former classmates who were dead from what the economists Anne Case and Angus Deaton have called “deaths of despair”: suicide, overdose, or alcohol-related illness. In the previous year alone, six friends and relatives had died of drug-related causes. “I’m having to ration my vacation time for funerals,” Nikki told me. Her long-term goal was to return home to work on the opioid crisis in Kentucky, but she was still too young and too female to get anything done in Appalachia, she said. In Indiana she had the ear of politicians, and she spoke so often at national conferences that Putnam, her boss, had gotten used to people coming up to him and saying, “You’re the guy who works with Nikki King!” But in Kentucky, no one would return her calls.

Curt King had long ago forgiven Nikki for running away to college, and had even helped her pay tuition. He drove us around the county in his rusty Ford F-150 pickup while narrating a landscape that existed only in his memory. I was supposed to imagine schools that weren’t shuttered, movie theaters that weren’t caved in, and once-booming coal towns with names like Elkhorn City and Uz (pronounced “you-zee”) and Seco, short for South East Coal Company, where his own father had been a supervisor before the mine closed in the late 1950s. “We would’ve never won World War II if not for the coal that made the steel,” he said. But none of that is here anymore, Nikki kept gently pointing out. We drove through a town called Neon where all the neon signs were burned out. “It’s like growing up in a skeleton,” Nikki said. “You look around and see the bones of when Papaw was little, but I never saw any of it.”

We went to the town of Jenkins so I could meet former Mayor G. C. Kincer, who’d lost reelection and was now living in a self-storage facility. He told me that his most memorable day as mayor was when he went to pick up his blood-pressure medication and found the town pharmacist spread-eagle on the floor, passed out from opioids he’d stolen. Nearly a third of the county reported having a disability, and the workforce participation rate was down to 43 percent. “If you took 100 job applications right now, you might get 10 people who could pass a drug test,” Kincer said. “I don’t see any hope.”

Nikki didn’t want to hear that. “I think we can beat it,” she said. “I just need somebody to start listening to me.” She’s been saying some version of that ever since.

From his perch at King’s Body Shop, where locals gather most mornings to share fast-food biscuits and talk through the problems of the world, Curt King spots trends before the social scientists do. “A lot of the drug problem here in Letcher is only slowing up now because so many people have already died off,” he told me. Indeed, in recent years, the number of overdose deaths has dropped in a handful of eastern-Kentucky counties, including Letcher and neighboring Clay. Experts aren’t sure whether the deaths have reached saturation or whether fewer among the addicted are dying because they’ve switched over to methamphetamine, which is less likely than opioids to result in an overdose.