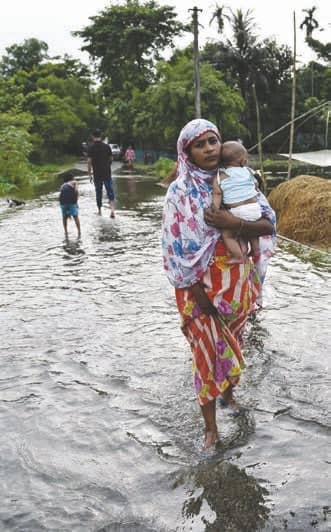 Floods in India have become an annual occurrence which abolishes lives and livelihoods. In this article, Mayuri Phukan and Niyati Seth say that there is an urgent requirement of conducting scientific studies that look at the nexus of hydrometeorological, economic and social dimensions related to floods. Flood management strategies should consider the river basin conditions and policy guidelines should incorporate adaptation measures in consultation with different stakeholders.

Floods destroy villages, croplands and basic infrastructure (transport, healthcare, communication network, etc.), thereby impacting the Gross Domestic Product (GDP) of the country. This year, the flooded regions of the country had to battle twin disasters of flood and COVID-19. As on July 2020, at least 11 million people have been affected by floods in the states of Assam and Bihar and 352,000 people have been displaced. 1 The most flood-prone region of the country is the Indo-Gangetic- Brahmaputra River basin, which carries about 60 per cent of the total river flow in the country. According to an estimate by the Planning Commission in 2011, 49.8 mHa out of a geographical area of 329 mHa of India is prone to floods. Flooding is a regular occurrence in the terai region of Himalayas and Brahmaputra valley— the multiple river systems that flow from hills of Nepal to north Bihar and Brahmaputra that flows from Tibet and its tributaries. The region receives high volume of rainfall and is susceptible to erosion, which further reduces carrying capacity of the river channels.

Studies have observed a significant increasing trend in the frequency of rainstorms in the last 65 years (1951–2015) in India and the duration of rainstorms have increased by about 15 days during this period. This increasing rainfall intensity causes extreme flood events, which causes large-scale destruction. 3 Rise of such extreme events can be attributed to the impact of climate change; the rise in temperature is a result of increase in atmospheric greenhouse gases (GHGs) which has also led to changes in characteristics of rainfall.