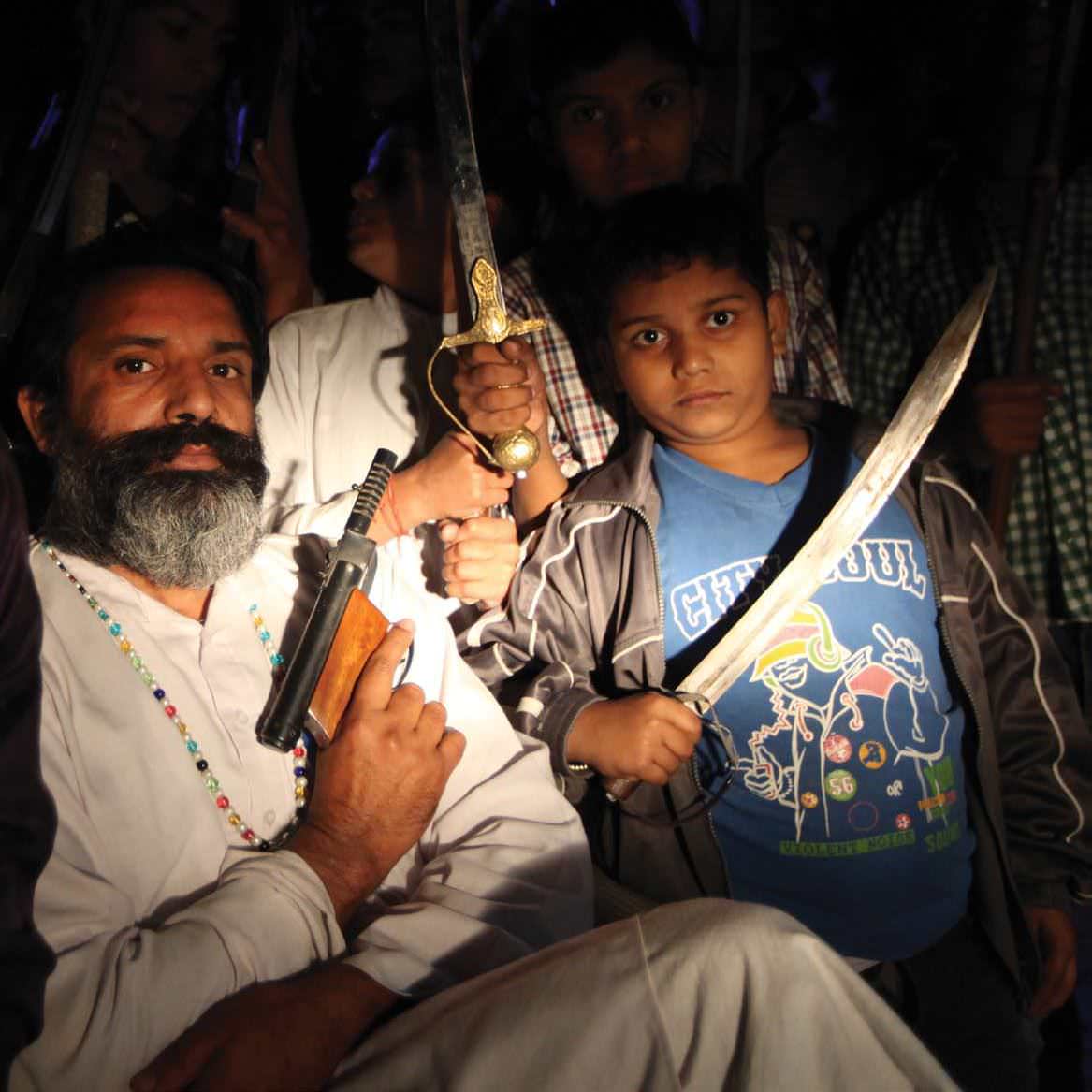 Not far from New Delhi, an army of Hindu extremists is taking shape on the ashes of Muzaffarnagar. To take on ‘Islamic terror’ and ‘Muslim terrorists’. Ankush Vats and Amit Bhardwaj report from Ground Zero.

Musalmanon ka pravesh varjit hai (Muslims not allowed)” reads a banner at the gate of the famous Devi temple at Dasna village in Ghaziabad district, 2 km down a dusty road from nh-24 and not far from the national capital. Inside, a teenager is thrashing a 10-year-old boy as the priest looks on, a smirk on his face. As the bully moves aside to get hold of a bamboo stick, the child runs and is chased until he is out of the gate.

The 10-year-old is Muslim. The priest says he had come to collect water from the temple pond. “That water is sacred,” he explains while the correspondents are being taken to meet Swami Narsinghanand Maraharaj, the mahant (head priest). “It has the power to cure diseases. I don’t understand why they [Muslims] come here when their entry is banned. They just don’t get it.”

The boy bows down to touch Swamiji’s feet, who pats his back and says triumphantly, “Aa mere sher (Come, my brave boy)”. Pramod, the ‘devotee’, cannot hear or speak and has been a regular at the temple since his childhood and is currently entrusted with keeping a watch over “intruders”. ‘Swamiji’ is no less than god to Pramod, who is also a national-level judo player and recently won a gold medal in Goa. Swamiji bears all his expenses, and had got him admitted in a school for specially abled children.

Pramod could have a promising career, perhaps, if the likes of Swamiji had not been training them in extreme Hindu fundamentalism. But that is exactly what is being done to thousands of people in western Uttar Pradesh. The result: Pramod freaks out at the sight of Muslims, no matter how poor and how familiar. He is immediately reminded of his judo lessons, imbibed with the idea that he has to fight jihadis. “If I see Muslims again, I’ll shoot them,” he explains in sign language. It seems meaningless to point out to him that the child he thrashed and drove away from the temple was 10 years old — not a ‘jihadi’ by any stretch of the imagination.

Pramod learned judo as part of the military-style training of children — the youngest participants are around eight years of age — being carried out by Hindutva outfits in western Uttar Pradesh. Swamiji and his associates have set up several training centres across the region. This is the same region where the Hindutva campaign against the “Love Jihad” trope snowballed into an anti-Muslim pogrom in the winter of 2013. That was during the run-up to the General Election that brought the BJP to power in New Delhi and was the first time since Partition that communal violence hit rural India on such a scale that thousands of Muslims, driven out of their homes, are still living in exile, so scary is the prospect of returning to their villages.

“Western UP will be the battlefield in the war between Hindus and Muslims,” Swamiji says loudly to someone over phone. An MTech from Russia and formerly known as Deepak Tyagi, Swamiji was once a prominent member of the Samajwadi Party’s youth organisation and had many Muslim friends. He left the party and joined a far-Right Hindu group due to “some personal loss” that he wants to avenge by fighting jihadis.

Swamiji believes that the Islamic State (IS)will attack India by 2020 and that Hindus must be trained to fight the jihadis. “Every Muslim in the country will side with the IS and that is why Hindus need to unite,” he thunders, while hurling abuses at Muslims, none of whom can be seen in the vicinity. “We have to save our country, our mothers, our sisters and our daughters from those devils. If we don’t unite now, it will be too late.”

The war on Muslims is not just about training Hindu boys to fight ‘jihadis’; it also involves allied tasks such as organising media briefings and campaigns to mobilise public opinion against the law taking its course, when the target is a kindred Hindu-extremist soul. So, for instance, Swamiji’s recent activities have included holding a press conference to express outrage over an FIR filed against against Kamlesh Tiwari, one of his disciples, for making a snide remark on Prophet Mohammad, which led to violence in faraway West Bengal’s Malda district. Lakhs of Muslims gathered to protest against Tiwari’s statement and went on to torch Kaliachak police station and several vehicles.