Who Will Be The Next Leader Of Ukraine?

AT FIRST IT WAS HARD TO TELL whether the clip was serious. Standing next to a Christmas tree, Volodymyr Zelensky, one of the most famous comedians in Ukraine, posted a video on New Year’s Eve announcing his bid for the presidency. Most people in Ukraine already knew him as the guy who plays the President on television. In his hit sitcom, Servant of the People, he stars as a history teacher who gets elected by accident and becomes the only honest leader in a system full of crooks.

But his real-life campaign was no joke. Zelensky has been the front runner in the race since January. In most surveys, roughly twice as many people say they will vote for him as for his closest rivals during the first round of voting on March 31. Polls suggest he would also beat any challenger in the runoff set for April 21, when Zelensky is expected to face the incumbent, President Petro Poroshenko, a candy magnate who has led Ukraine through five years of conflict with Russia.

The matchup between them might seem amusing, as opposed to terrifying, were it not for the fault lines that run through Ukraine. The conflict along the border with Russia has already claimed over 13,000 lives. More than a million people have fled the fighting. The U.S. and its allies have sent weapons to help defend Ukraine and imposed sanctions to punish Russia. The resulting standoff has brought the Cold War back to life along the eastern edge of Europe, and the next Ukrainian President will need to keep it from turning hot.

Zelensky says he’ll manage it. “Try not to worry,” he told TIME in his dressing room one night in March after the premiere of his new variety show in Kiev. “We’ll figure it out.”

But what exactly happens if he doesn’t? Five years on from the revolution on Maidan Square, where police killed scores of protesters before the old regime collapsed, the new one in Kiev remains mired in corruption, despised by its people and one skirmish away from being invaded by the nuclear power next door. The rumble of that war has always risked drawing in the U.S. and Europe. But the more likely outcome if the fighting drags on is what diplomats call “Ukraine fatigue”—the deepening sense in foreign capitals that the country is a lost cause, too dysfunctional to save from Russia’s clutches.

Zelensky might be the one to prove them wrong. With help from some savvy advisers and, at least according to his opponents, the backing of an oligarch who is wanted in Ukraine over a multi billion dollar fraud, he has built a campaign that humiliated the elites by harnessing the nation’s fury against them. No other politician (except perhaps the former reality tv star who occupies the Oval Office) has provided a truer test of the theory that politics in our age is just a form of show business.

It certainly feels that way to Zelensky’s rivals. “It’s not just Ukraine. This is a trend all over the world,” says Yulia Tymoshenko, the former Prime Minister who is now polling in second place. “It’s the total degeneration of representative democracy.” With the right spin machine and enough money to manipulate voters on social media, she says, “You could make a Senator out of a horse.” 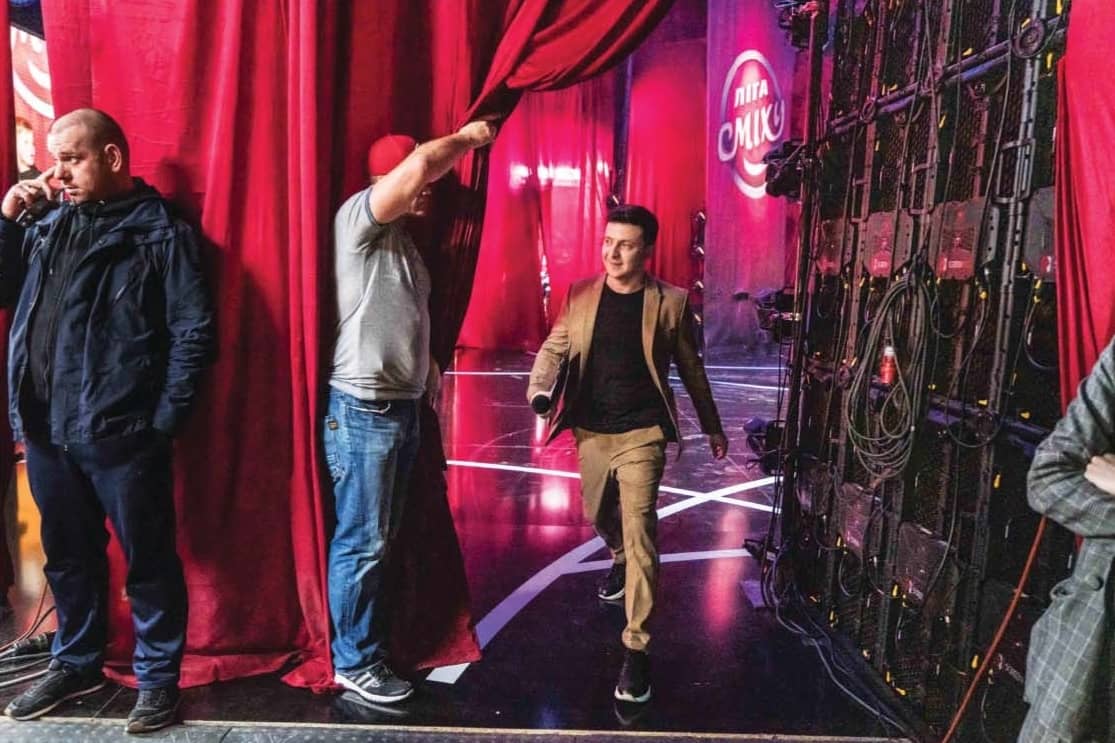 Or a President out of a comic. And why not? In a system as corrupt as the one in Ukraine, Zelensky may be right to treat political experience as a liability. He says he plans to “crowdsource” ideas for running the country. He has declined to take part in debates or publish a detailed electoral platform. Instead he has focused on entertainment. The third season of Servant of the People—in which his character (spoiler alert) saves Ukraine from ruin—is due to drop in its entirety a few days before the election, giving voters just enough time to binge watch it before heading to the polls.

In lieu of rallies, Zelensky is also touring a variety show complete with comedians, dancers and at least one Playboy Playmate. He urged the crowd on opening night not to think too hard about the upcoming vote. “No campaigning tonight,” he said. “It’s just a show. Besides, you paid money for it.” After a pause to let the weirdness of it all sink in, he added, “Who’s ever heard of such a thing.”