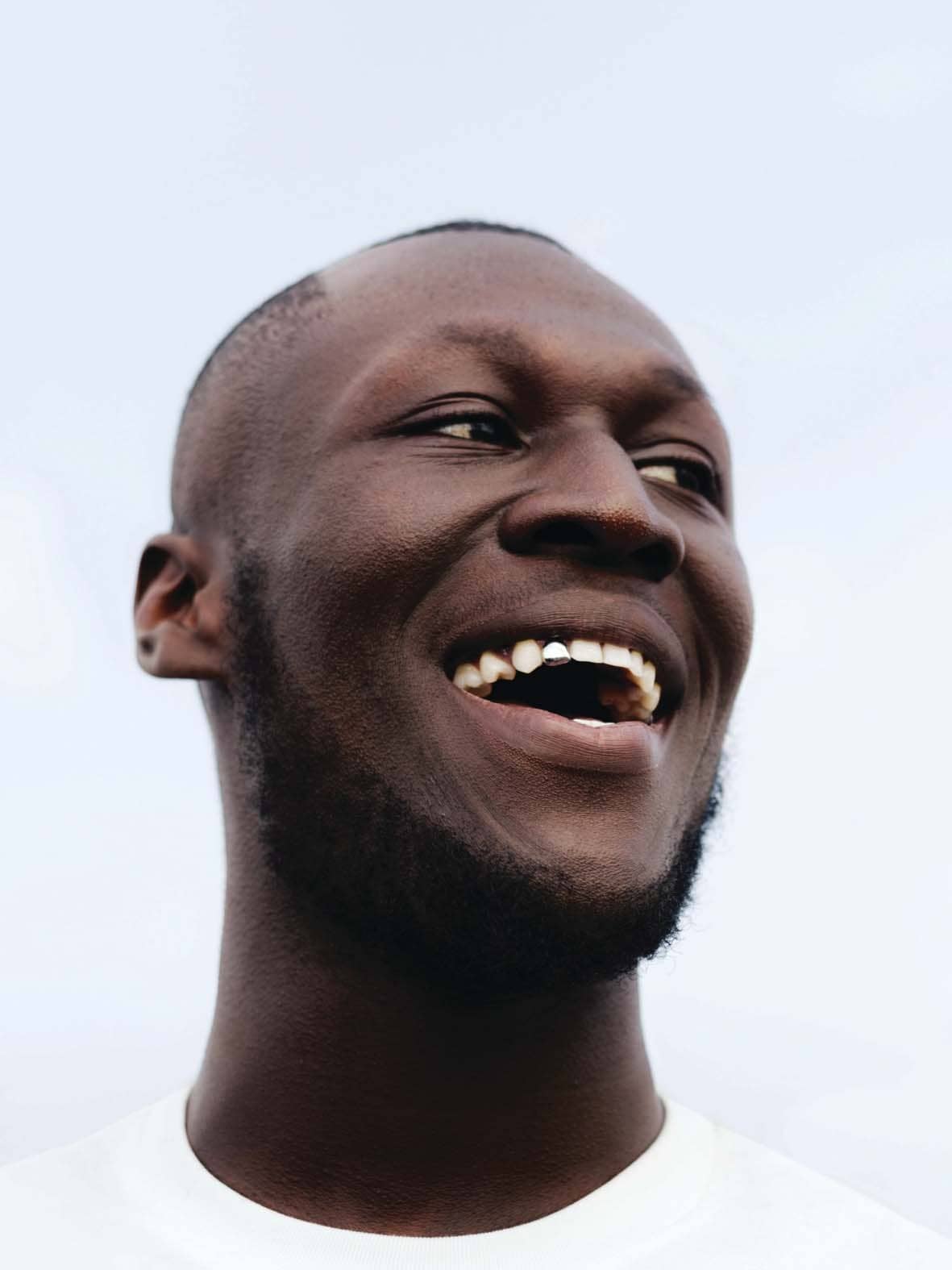 10 rising stars who are changing the world in politics, sports, fashion and more.

MIDMORNING IN A LEAFY SUBURB ON the outskirts of southwest London, and Stormzy is feeding Enzo. The 26-year-old rapper bought the Rottweiler a year ago, when soaring fame made personal security a necessity that a very big dog could address while also giving a new celebrity a chance at staying grounded.

Michael Omari, better known as Stormzy, is one of Britain’s most successful musicians and an ambassador for grime, a genre of music that emerged from the streets of multicultural London in the early 2000s and that is characterized by frenetic urgency. In 2017, an academic from the University of Westminster said it was on track to be “as disruptive and powerful as punk.” The genre’s most famous songs hurtle by at 140 beats per minute, as much electronic music as hip-hop. Stormzy’s rise to fame has been almost as lightning-fast. In the past two years he has stacked up awards, enjoyed a No. 1 album, and in June became the first-ever British rapper to headline Glastonbury, one of the world’s largest music festivals. His duet with Ed Sheeran, “Take Me Back to London,” topped the British singles charts for five weeks this autumn.

When we meet in his home, Stormzy is initially a little distracted by Enzo, but he relaxes once the interview gets going. He seems in a philosophical mood. Of headlining Glastonbury, he says, “For the first time ever in my life, maybe in my career, I’ve achieved something and it’s given me perfect peace.”

Stormzy grew up in Norbury in southwest London. As a teenager, he absorbed grime culture by watching Channel U— the now defunct British satellite channel dedicated to U.K. hip-hop and grime—and rapping with his friends. He achieved exemplary exam grades in secondary school, something that has received significant media attention in the U.K. “They’re always a bit shocked that there’s academic brilliance in a young black South London brother with a street background,” he says. “If you saw a group of lads outside the chicken shop on pushbikes, I’m sure a lot of them are academically brilliant. Little did you know!”

Success didn’t come overnight. At 20, he got a job on an oil rig in the English port city of Southampton, and he remembers writing lyrics on Post-it notes while working. Within a year he made the decision to quit his job and pursue music full-time. It was 2014. “I don’t remember a crazy feeling of fear,” he says. “I remember feeling very sure that I’m a good MC. I didn’t ever feel stuck or at a dead end.”

It ended up being a good decision. His first EP, Dreamers Disease, won him a MOBO Award, Britain’s highest-profile honor celebrating music of black origin. Next came “Shut Up,” an improvised rap that catapulted him to nationwide fame, garnering millions of views on YouTube. In 2017, his debut studio album, Gang Signs and Prayer, went straight to No. 1 on the U.K. album charts, the first grime album to do so in the genre’s 20-year history. Grime had arguably found its first mainstream star.

Now riding the crest of his fame, Stormzy is determined not to pull the ladder up behind him. Instead, he is dedicating himself to bringing greater visibility to a wider community of black musicians, artists and creators in Britain. “There’s always been a kind of lack of spotlight and shine on the black British side of British culture,” he says. “[But] there’s a whole world of it . . . It’s a beautiful thing, and it’s coming of age right now.”

IN THE EARLY DAYS of grime, the music was broadcast through pirate radio stations, MP3 files on mobile phones, and word of mouth. By 2003, the genre earned a badge of establishment legitimacy when 19-year-old Dylan Mills, also known as Dizzee Rascal, won the prestigious high-end Mercury Music Prize for his first album, Boy in da Corner. It is widely credited as one of the pioneering albums of the genre.

Grime’s standout stars were, and still are, overwhelmingly young and black, with working-class roots. It was a combination that invited intense scrutiny. The genre became maligned by certain politicians. The same year Dizzee Rascal won the Mercury Prize, Britain’s then Culture Minister Kim Howells linked the deaths of two teenagers to the British rap scene. By 2006, David Cameron, then the Conservative Party leader, was criticizing BBC Radio 1’s Saturday night hip-hop show for “encouraging people to carry guns and knives.” London’s Metropolitan Police had introduced a risk- assessment document named Form 696, targeted at musical events that “predominantly feature DJs or MCs performing to a recorded backing track.” The form required each performer to be checked against a police database before taking the stage. Most controversially, until 2009, it asked for the details of the audience’s ethnicity. Until it was lifted in 2017, Form 696 effectively muted the British grime scene. Gigs were pulled at short notice, and performers struggled to make a living.

“I know I’m the product of bare injustice,” Stormzy says of his predecessors who struggled through the genre’s leaner times. “There are so many iconic, legendary, more influential grime songs that are never going to sell as much records as I’ve sold.” He is sensitive to the issues faced by those who came before him. “This is why I’m always so thankful for being in the position I am. I feel like all those artists or public figures or celebrities who went through that, had to go through that . . . they didn’t have the luxury of being free with their music, and they had to bite that bullet for me. So I love and respect all those people, for all their decisions.”

For the most part, grime has yet to break into the U.S. mainstream, though rapper Tinie Tempah made a shot with his debut U.S. single, “Written in the Stars,” which peaked at No. 12 on the Billboard Hot 100 in 2010. Meanwhile, Drake’s 2017 album More Life featured several grime artists, giving Skepta and Giggs a major boost among North American audiences.

But grime is already finding its place outside the U.K.—and the U.S. could be next. “Wherever there’s underground culture or music, grime has a place,” Stormzy says, referring to grime scenes bubbling up in Denmark, Sweden and Australia.

The British government seems to agree. In 2019, a report from a U.K. par-liamentary committee called grime “one of the U.K.’s most exciting musical exports.” Stormzy’s success signifies Britain welcoming the genre with open arms, something crystallized by his joining the ranks of Adele, Radiohead and Coldplay as a headliner of Glastonbury. His set transported the dense streets of South London to a field in agrarian southwest England. He took to the stage adorned in a stab-proof vest decorated with a black-and-white Union Jack, designed by the anonymous street artist Banksy.

Stormzy was the first black British solo artist to headline the festival. He says he drew inspiration from Beyoncé’s Homecoming headlining set at Coachella in 2018. “Not in terms of anything to do with how it sounded or looked,” he says. “Trying to imitate Beyoncé, that’s a fool’s game. Just in terms of quality, and impact.” For those familiar with both black British and African- American imagery, the similarities between the two performances were clear. Each felt like a celebration of rich aspects of the culture that haven’t always found a way into the spotlight. At Coachella, Beyoncé brought with her the marching bands of historically black universities and colleges. At Glastonbury, Stormzy brought with him black gospel singers and ballet dancers, and snippets of speeches from a black British politician and black British author.

“I wanted it to be the pinnacle of my career, my defining moment,” Stormzy says. The set lived up to that. In the New Yorker, author Zadie Smith wrote, “For this was about arrival: of a king and his court and the many, many people who have hoped for this day, when the hyphenated ‘Black- British’ would appear, to the English ear, as permanent and central a condition as ‘African- American.’ ”

During his time onstage, he took the unusual step of creating an interlude in which he mentioned all of the major grime artists who had paved the way for his success, as well as his lesser- known contemporaries. “I proper felt like I needed to do that,” he explains. “There’s been this historical thing of letting one black person in at a time.”

STORMZY’S COMMITMENT to collectivism goes beyond shouting out his fellow grime artists on Glastonbury’s main stage. In the past two years, alongside his work in music, he has launched Merky Books, a publishing imprint with Penguin Random House U.K., as well as partnering with Cambridge University to launch the Stormzy Scholarship, funding the tuition fees and living costs of two black students during their degree studies. “There’s a whole side of blackness and black Britishness that doesn’t often fall under the kind of umbrella term that everyone uses of ‘black culture,’” he says. “It’s like black culture almost becomes music, acting, sports and just kind of celebrity and whatever. I was like, Yo, there’s theater, there’s literature, books, there’s ballet.”

Merky Books is Stormzy’s platform for aspiring black British writers, who often struggle for recognition in Britain. In 2016, research from the Bookseller, a publishing trade magazine, found that of the thousands of books published in Britain that year, fewer than 100 were by British authors of color. Through an annual New Writers Prize, Merky Books offers a clear route to publication. “We’re trying to push young black writers, first and foremost,” he says.