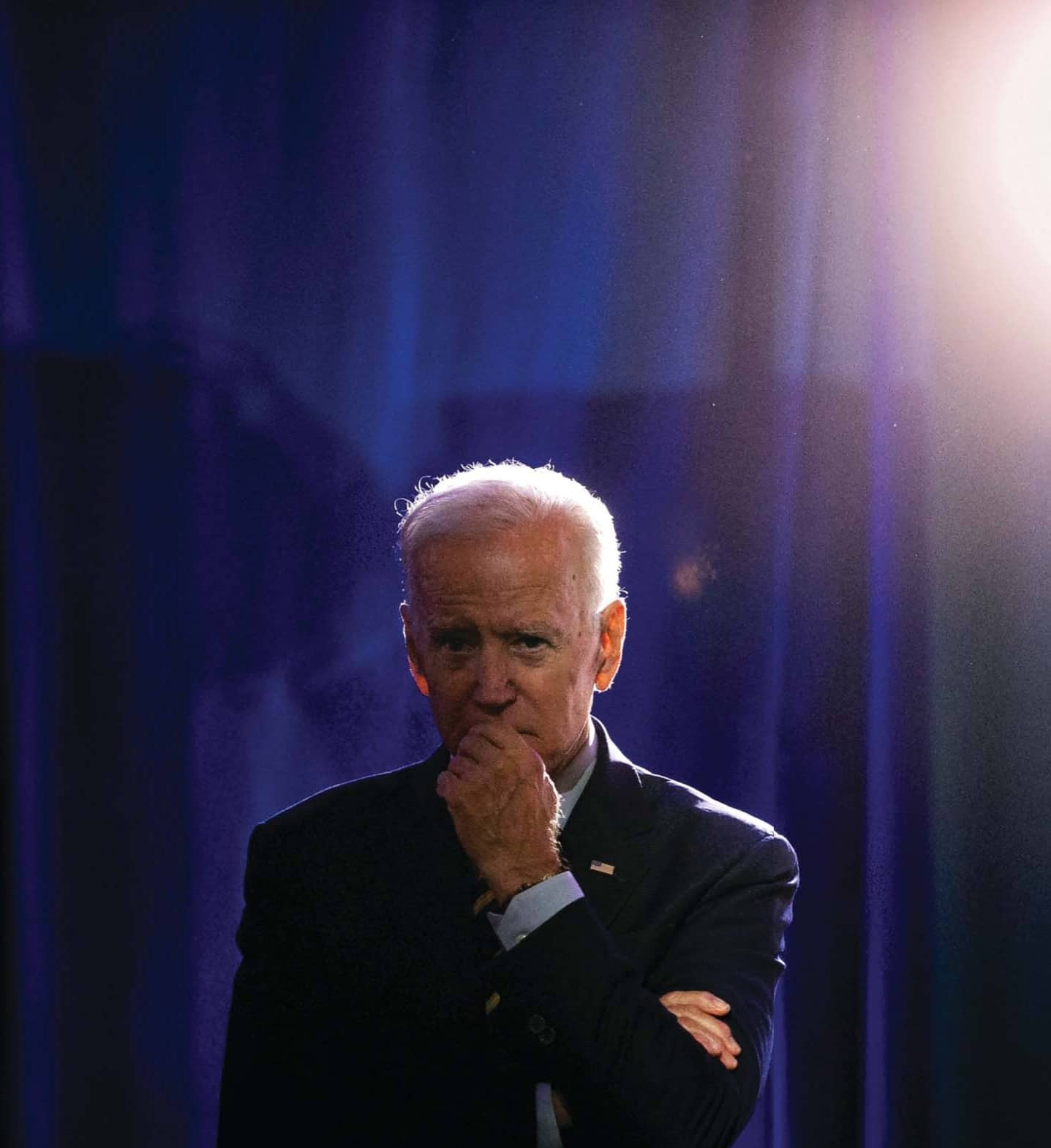 ON A WARM FRIDAY AFTERNOON IN JULY, JOE BIDEN STOOD under a tent on the banks of the Cocheco River in Dover, N.H., trying to rally a crowd of 200 behind his presidential campaign. Biden’s staff had handed him a speech and positioned teleprompters onstage. But he wasn’t in the mood to follow the script. So aides removed the prompters, and Biden tossed the printed speech aside. “I’ve got a nice speech here for you, but I’m not going to take the time,” he told the crowd. “I’m going to try to shorten this up for you.”

And off he went, literally and figuratively, pacing the lawn over the course of a 36-minute riff. Instead of focusing on policy prescriptions, such as his call to triple federal funding for low-income schools, Biden noted that his home state of Delaware has more minorities than New Hampshire. He emphasized policy proposals from the eight years he served as President Barack Obama’s loyal lieutenant: rejoining the Paris climate agreement, updating the Iran nuclear agreement, building on Obamacare. Then Biden cut to the chase. The big ideas espoused by today’s Democrats are unrealistic, he said, and his colleagues’ unwillingness to collaborate with Republicans is foolhardy. “Somehow,” he said, “being able to cooperate with the other side is to be naive.”

The speech was a snapshot of the challenge facing Biden’s campaign. Six months before the Iowa caucuses, Biden looks like the shakiest front runner in years. Though every poll still shows him running atop the Democratic field, since he joined the race in late April, Biden’s support has been cut almost in half. His campaign message has been unfocused, with the candidate caught between advice dispensed by a raft of hired guns, a cadre of old friends and his own instincts. “Biden’s gonna Biden” is how staffers have come to shorthand it. As the Democrats debate where to take the party in the future, Biden can seem stuck in the past: while rivals expressed support for paying slavery reparations to African Americans, Biden was talking about working across ideological lines with avowed segregationists. A 76-year-old man who joined the Senate during the Nixon Administration increasingly seems out of step in a primary dominated by questions of race, gender and inequality. Where others are preaching the virtues of a fight, Biden is urging civility. “There will always be a gap between Joe Biden and the future,” snarked Adam Green, a co-founder of the Progressive Change Campaign Committee, which is backing Senator Elizabeth Warren.

Biden tries to put a positive gloss on things, saying the problems come with the territory when you’re the front runner. “I’d rather be there than anywhere else,” Biden said. “But, you know, it’s amazing.” A few hours later, he was more open about his frustrations with his campaign. Staffers had invited journalists to tag along as he picked up some chocolate chip ice cream. But Biden—who believes President Donald Trump’s rise was fueled by naked authenticity and sees the same trait in himself—found the setup phony. “After all these years of being in public office, I’m known for ice cream and sunglasses,” Biden lamented. “There’s gotta be something better than that.”

The primary won’t get any easier. After the drubbing he took in the first round of debates, when Senator Kamala Harris pummeled his record on busing and school desegregation, the pressure is on the former Vice President to perform better in his second debate, on July 31. The uneven first performance only raises the stakes for its sequel.