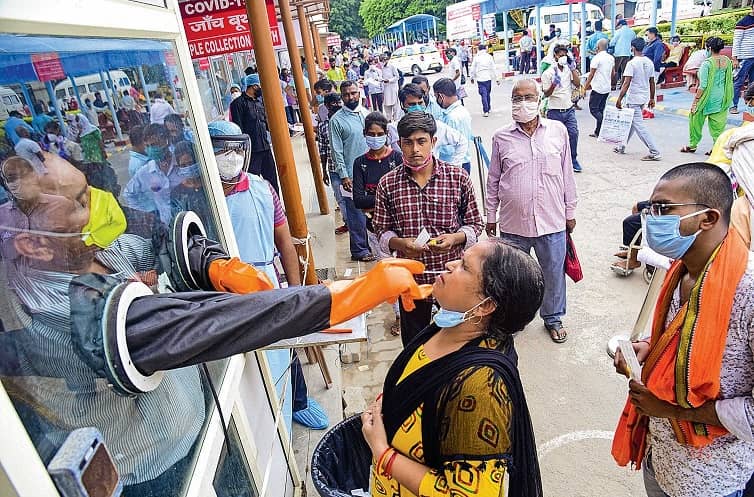 Despite a high number of tests, Uttar Pradesh struggles to contain Covid-19 because of other challenges

ON AUGUST 16—the seventh day of running a high fever—Ragini Asthana’s breath became wheezy. The 56-year-old teacher was rushed to the Pandit Uma Shankar Dixit hospital in her hometown Unnao. She did an antigen test for Covid-19, which came back negative. But her oxygen and blood pressure fell rapidly. She was then referred to the Ursula Horsman Memorial Hospital, Kanpur, and was admitted to the ICU on the first floor. By then, Asthana could barely move. Yet, in the absence of a catheter, she had to drag herself to the only toilet available on the ground floor, from where the hospital’s Covid-19 wing operated. Her oxygen levels improved slightly before plummeting again. Family members said that the same nurses and doctors moved between the ICU and the Covid-19 ward. When they asked an attendant to wear gloves, they were asked to provide the same.

Around 4:30am on August 19, after receiving four injections over two days to stabilise her blood pressure, Asthana was declared dead. The family was given, what they call, a temporary death certificate without the hospital’s stamp. It listed cardiorespiratory arrest as the cause of immediate death. Chronic obstructive pulmonary disease was the antecedent cause. The family said that she had never experienced breathing distress earlier. Her body came in a bag with injunctions to not open it. “Her symptoms pointed to Covid-19, but we could not get an RT-PCR test despite a chief medical officer (CMO) from another district calling the hospital for it,” said Asthana’s nephew Ankur Khare. “Losing her is difficult. Not knowing what we lost her to is more difficult.” The family then got prescriptions from a doctor in Kolkata for tests at private labs. One member tested positive and has since died.

Asthana’s case illustrates multiple strands in Uttar Pradesh’s Covid-19 struggle. There is testing, but not necessarily of the right kind. The situation magnifies staff shortages in hospitals and how non-Covid patients bear its brunt. It highlights the helplessness of health care workers, many without the basic protection of gloves. With more than three lakh cases, Uttar Pradesh is one of the five states that contribute to almost 60 per cent of the country’s caseload.