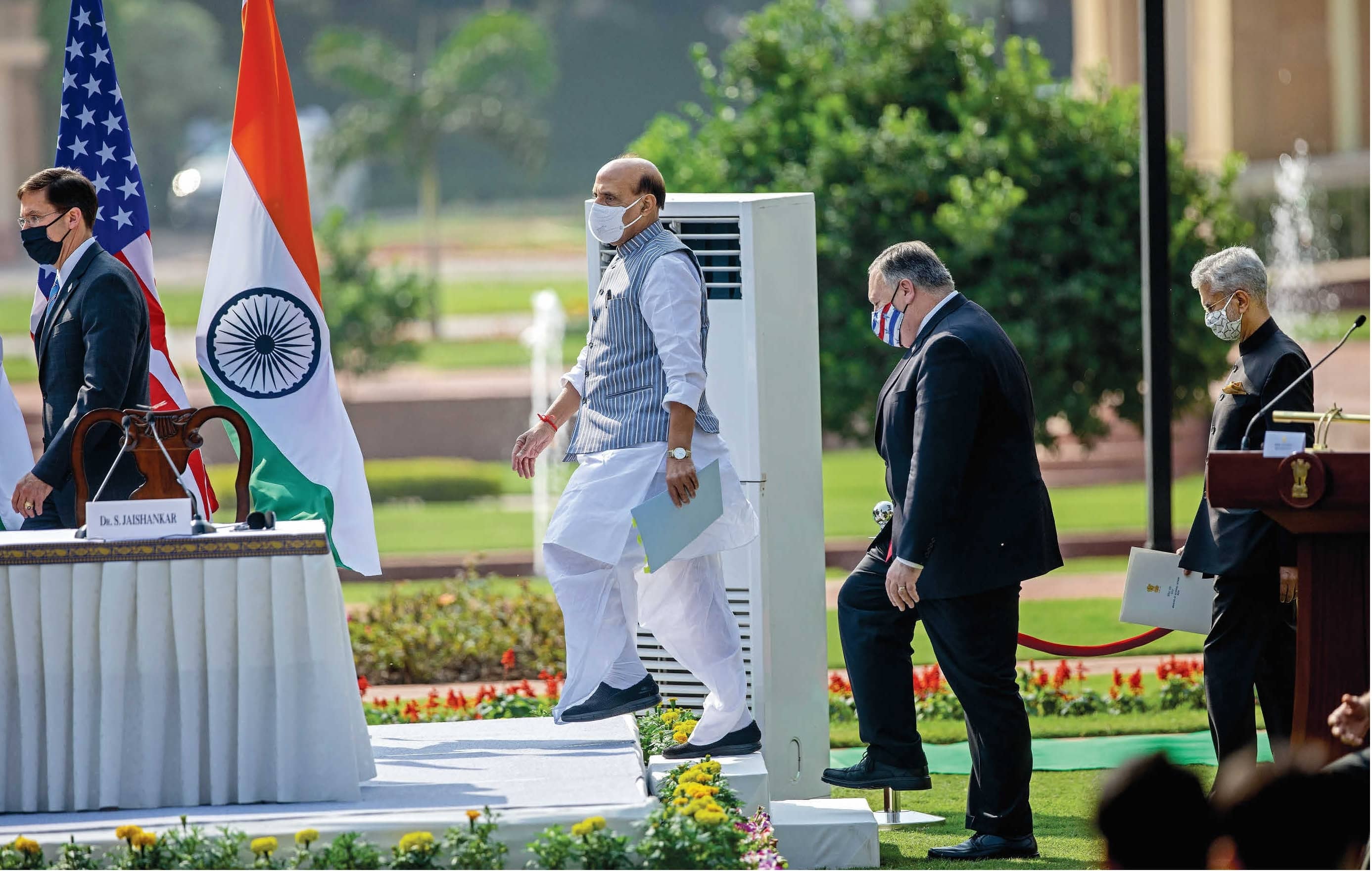 Encouraged by strong bipartisan support from Washington, India commits to closer defence cooperation with the US

PRADIP R. SAGAR
HOURS BEFORE attending the 2+2 dialogue with Defence Minister Rajnath Singh and External Affairs Minister S. Jaishankar, US Secretary of State Mike Pompeo and Secretary of Defence Mark T. Esper visited the National War Memorial in New Delhi to pay tribute to India’s fallen heroes. “We visited the National War Memorial to honour the brave men and women of the Indian armed forces who sacrificed for the world’s largest democracy, including the 20 soldiers killed by the PLA in the Galwan valley,” said Pompeo, while issuing a joint statement after the dialogue at the iconic Hyderabad House.

He said the Chinese Communist Party was no friend of democracy, rule of law, transparency, freedom of navigation and a free and prosperous Indo-Pacific. “I am glad to say India and the US are taking all steps to strengthen cooperation against all threats and not just those posed by the CCP,” said Pompeo.

During the ongoing Sino-Indian military standoff, the US has stood firmly with India. The political and military leaderships of the two countries are in constant touch, sharing information on the movement of Chinese troops and weapons along the Line of Actual Control.

The US votes on November 3 to elect a new president, but military strategists believe that the results will not affect its growing defence ties with India. It is evident from the signing of BECA (Basic Exchange and Cooperation Agreement), the last of the four foundational military agreements, barely a week before the elections. Under the agreement, India gets access to advanced satellite imagery and topographical and aeronautical data in real-time to guide its missiles and armed drones to their targets.

The Manmohan Singh government was opposed to the foundational agreements, and had cited national security concerns. But the Narendra Modi government signed the Logistics Exchange Memorandum of Agreement (LEMOA) for reciprocal logistical support in 2016, the Communications Compatibility and Security Arrangement (COMCASA) for greater access to niche military technology in 2018 and the Industrial Security Annex to the General Security of Military Information Agreement (GSOMIA) to allow private Indian companies to have partnerships with American firms in 2019. The GSOMIA was signed by the Atal Bihari Vajpayee government in 2002.

“The relationship will continue to deepen regardless of the outcome of the presidential elections because of the common interests with respect to China and Russia’s growing bonding with Pakistan,” said Benjamin Schwartz, senior director for defence and aerospace at the Washington-based US-India Business Council.