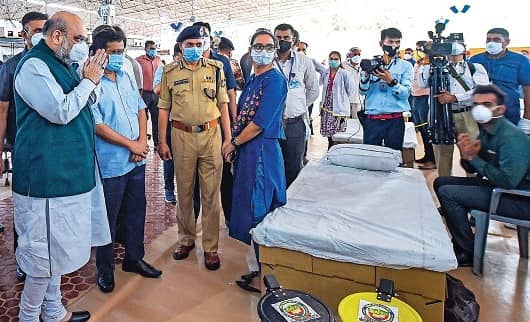 By being closely involved in Covid-19 relief measures in Delhi, Amit Shah is taking a swipe at the Kejriwal government

ON JUNE 27, Union Home Minister Amit Shah and Delhi Chief Minister Arvind Kejriwal together inspected a 10,000-bed makeshift hospital for Covid-19 patients that is coming up at the Radha Soami Satsang Beas campus on the outskirts of the capital. On the face of it, the two leaders were a picture of bonhomie. However, scratch the surface, and the political fault lines become evident. Even the run-up to the joint inspection had its share of obvious and not so obvious efforts to claim ownership of the initiative.

Kejriwal had tweeted to invite Shah for the inspection, and requested him to provide health care staff for it from the Indo-Tibetan Border Police Force and the Indian Army. Shah had promptly responded, reminding Kejriwal that it had already been decided at a meeting between them that doctors and nurses from the ITBPF would be deployed at the facility. He also spelt out details of when he expects it to be functional. Shah’s response was evidently aimed at giving the impression that he was in charge of the Covid-containment measures in the capital. On the other hand, Kejriwal wanted to convey the same, and also highlight that he was keen on the Centre’s collaboration.

Shah stepped into Delhi’s Covid-19 scene three months after the coronavirus arrived in the capital, at a time when the situation appeared to be getting out of control. There was a surge in the number of cases and the Kejriwal government was swamped with reports of people failing to get beds in hospitals and finding it difficult to get tested for the virus. Critics said the Aam Aadmi Party regime had slackened its testing and tracing efforts. And, the government’s decision to reserve Delhi’s hospitals for Delhiites was seen as a reflection of the city’s lack of capacity to deal with the disease.