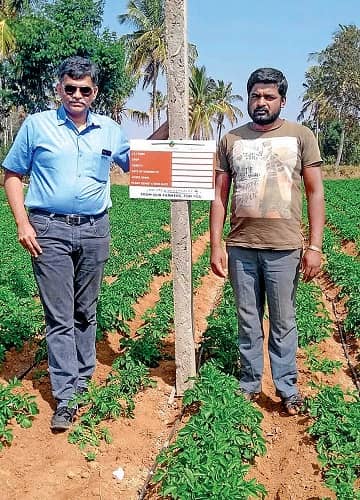 TWO YEARS AGO, a late evening meeting changed Kishan Rathor’s perspective on agriculture. After the meeting, with agriculture startup Gramophone, he decided to divide his 10-acre farm in Dewas district of Madhya Pradesh into two. He used traditional methods of sowing moong (green gram) in one half and in the other he followed the advice of Gramophone’s app.

“The production cost decreased, while output increased from 22 quintals to 27 quintals,” said Rathor. “It was the first time I realised agriculture can be profitable.” He is classified as a medium farmer; 13 per cent of the farmers in the country fall into this category, which is under threat of being pushed into poverty if the farmers do not use resources well. Luckily for them, increased penetration of cheap smartphones in rural areas has opened up access to information like never before. And the younger farmers are willing to try new things on their farms.

Over 1,000km from Dewas, in Muzaffarpur, Bihar, litchi farmer Sunil Kumar, too, harnessed the power of technology. As lockdown disrupted supply chains, he got himself listed on Kisan E-mart, powered by Pune-based startup Agri10x. The listing caught the attention of a London-based buyer. After a deal was negotiated, the purchaser’s kin checked the produce prior to shipping.

There are over 500 such agritech firms and many of them were founded in the last five years mostly by IIT and IIM alumni. They are bringing innovation into agriculture, primarily digitising the farm-to-factory and farm-to-fork processes, and focusing on minimising wastage across the supply chain and empowering farmers to make informed decisions.

Though the market penetration of these firms is only around 1 per cent, the entry of a new wave of entrepreneurs is starting to transform the way food is produced, marketed and consumed. Covid-19, the bane of millions worldwide, became a boon for agritech companies. These companies also stand to benefit from the Centre’s agricultural reform laws, which diluted the Essential Commodities Act, gave legal framework for contract farming, and allowed farmers to sell to anyone, anywhere. As a result, they are now poised to scale-up operations. As per a recent Ernst & Young report, agritech in India has a market potential of $24 billion by 2025.