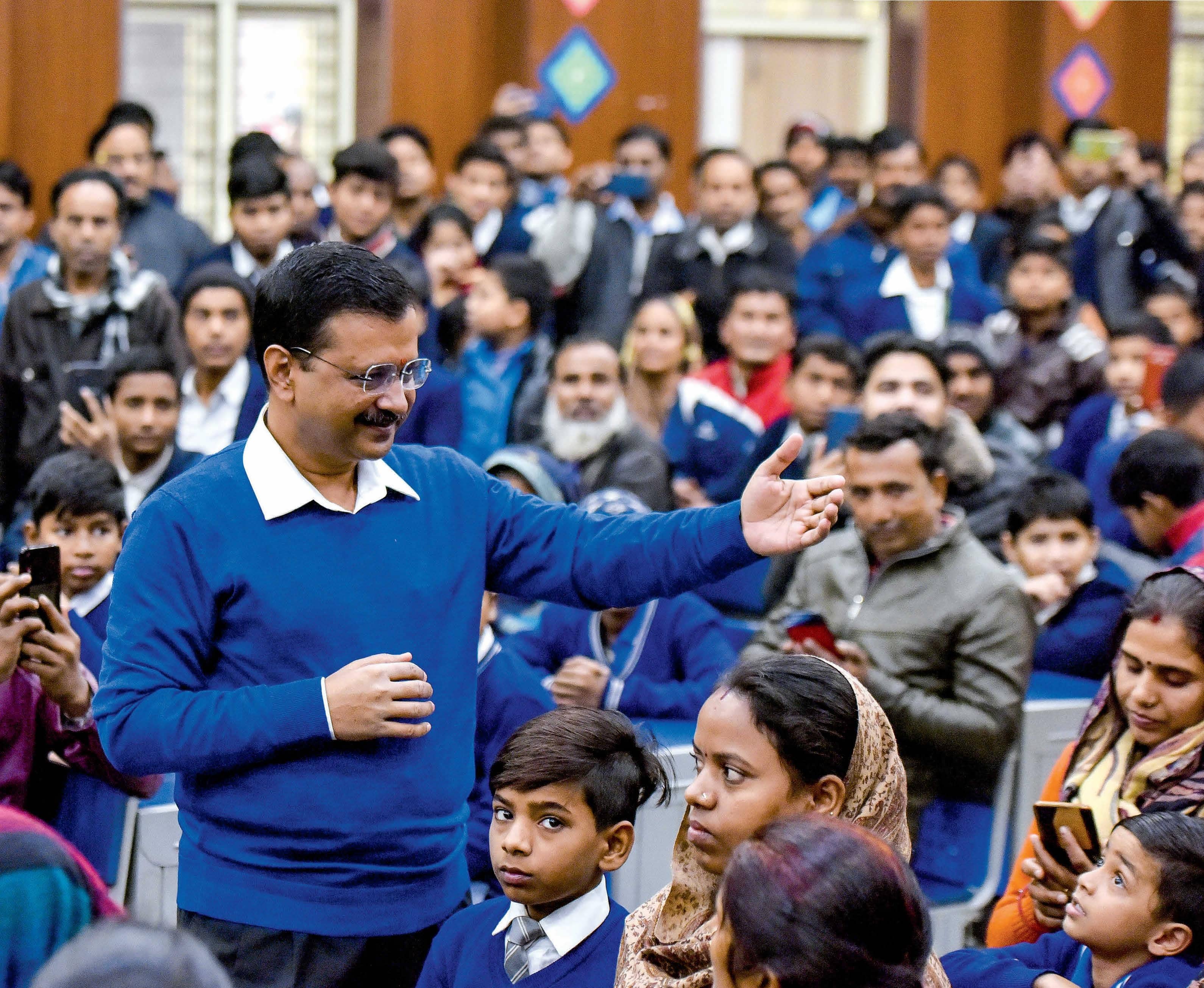 ARVIND KEJRIWAL IS NO LONGER THE REBEL ACTIVIST ON THE STREETS; HE IS A SMILING, REFINED AND CAUTIOUS LEADER WHO CONNECTS WITH HIS ELECTORATE. WITH THE DELHI ELECTIONS JUST WEEKS AWAY, THE AAP HOPES THAT THIS NEW AVATAR WILL SEE OFF A BELLIGERENT BJP AND HELP IT RETAIN THE CAPITAL

The Aam Aadmi Party recently felicitated a group of senior citizens, beneficiaries of the Delhi government’s free pilgrimage scheme. The group, just back from the Jagannath Temple in Puri, was in for a surprise as Chief Minister Arvind Kejriwal dropped in to talk to them. Hands folded, a smile on his face, Kejriwal inquired about their well-being and the trip, and sought their blessings. The elders wished that a tour to Rameswaram be organised next, and Kejriwal, called ‘Shravan Kumar’ by some in the group, readily agreed.

If he came across as a ‘dutiful son’ in the meeting with the elders, he was the empathetic ‘elder brother’ as he shared a bus ride with women after his government made travel in public buses free for them. Elsewhere, he was a ‘favourite uncle’ as he spoke to students and parents at a recent mega parent-teacher meeting held in state government schools.

There is a world of difference between the Kejriwal of 2020 and his ‘muffler man’ avatar of 2013, when the fledgling AAP had made a stunning debut with 28 seats in the state elections. The muffler had come to symbolise the aam aadmi fighting a corrupt establishment, but it has vanished since. Kejriwal even quipped recently that people had failed to notice its absence.

No longer the rebel, he is now the family man who understands the problems of the common man. An empathetic smile has replaced the intense stare of a rebel, and pictures showing him doing mundane activities—checking potted plants for mosquito larvae or doing puja with his wife, Sunita—are often seen on his and his party’s social media pages.

Full-page newspaper ads and billboards have further affirmed this new avatar. And though political rivals may call it a waste of public money, the ads were an important tool in the visual transformation of Kejriwal.

It terms of content, too, the Kejriwal of today is far removed from the man who accused the Centre of creating hurdles and even claimed that Prime Minister Narendra Modi could get him bumped off.

Of late, Kejriwal has desisted from attacking Modi and the Centre, and his party has strategically been on the Centre’s side in issues such as the abrogation of Article 370 and the Ayodhya verdict.

Recently, referring to Home Minister Amit Shah’s attacks on him, Kejriwal told reporters: “I accept his abuses. But I will not abuse him back. I do not want to indulge in politics of abuse.”

The change of tack, according to AAP leaders, is because the people in Delhi did not want their government to constantly blame the Centre for everything. Also, it was done to counter the image of a dictator and a hothead, which his friends-turned-foes had created.

If the leader has changed, so has the party. The AAP has decided to go totally local and keep the focus on its schools, clinics and subsidies, including free water and electricity up to 20,000 litres and 200 units.

“For the first time, there is a government that has done more than it had promised,” said AAP’s Delhi convener Gopal Rai. “The government has acted as a friend in dealing with the problems of the common man.”

The stakes are high for the AAP, which had won a mammoth 67 of 70 seats in 2015, but has not tasted much electoral success after that. It failed to make an impact in the 2017 municipal elections, and its forays outside Delhi have been disappointing. Just a few months ago, in the Lok Sabha elections, it failed to win a single seat in Delhi, coming third in six of the seven constituencies.

The party, however, quickly put aside the loss and put its national ambitions on the back-burner. It promptly launched the slogan ‘Dilli Mein Toh Kejriwal (In Delhi, it’s Kejriwal)’, which seems to have gathered steam, especially with the recent electoral setbacks for the BJP in several states.