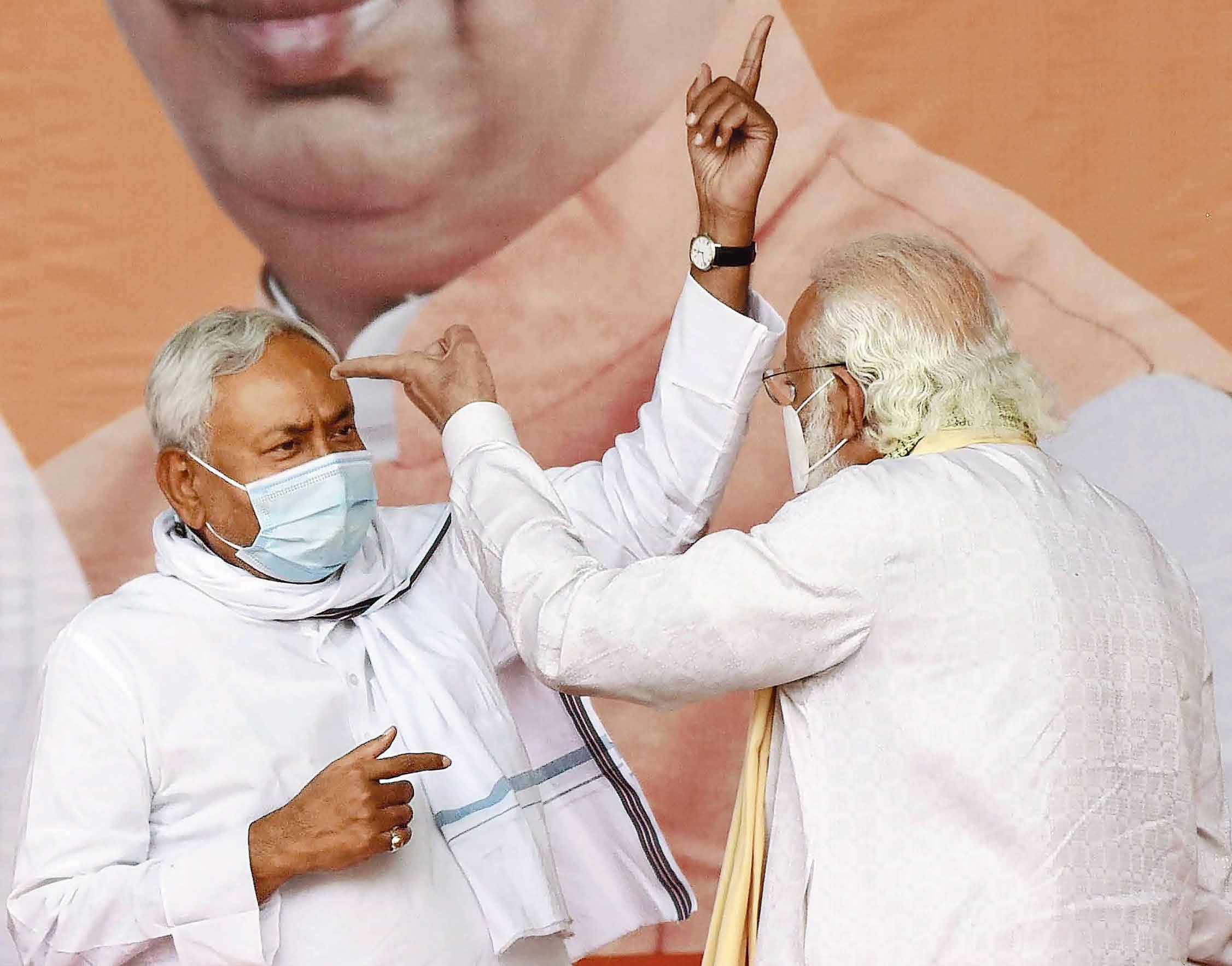 The Mahua assembly constituency in the fertile Gangetic plains, about 50km north of Patna, may well be representative of the intricate Bihar politics, which is always in churn. Dr Ashma Parveen, a local gynaecologist, is the candidate of Chief Minister Nitish Kumar’s Janata Dal (United). She is also the daughter of Mohammed Ilyas Hussain, a key aide of former chief minister Lalu Prasad. Hussain is serving a five-year sentence in the 22-year-old bitumen scam case, which took place when Lalu was chief minister. Parveen's candidature forced Lalu's eldest son, Tej Pratap, the sitting MLA of the Rashtriya Janata Dal, to move to Hasanpur in the neighbouring district, out of fear over a split in minority votes.

On October 26, Nitish Kumar flew down in his AgustaWestland helicopter to campaign for Parveen. Kumar was met with a crowd not as enthusiastic as he would have liked. With several empty chairs staring at him, he highlighted the work done in the past 15 years—roads, education, empowering women, improving law and order. “The younger generation should take notice of our work,” he said. “Some people only believe in publicity. I believe in work.” The crowd mostly remained silent, but cheered when he promised solar street lights for every village in his “next term”.

Tejashwi’s promise of 10 lakh jobs has become a talking point in Bihar. People are not paying much attention to Nitish’s questions on the economics of implementing such a massive project. The JD(U)’s ally BJP, however, reacted to it with a promise of creating 19 lakh employment opportunities. 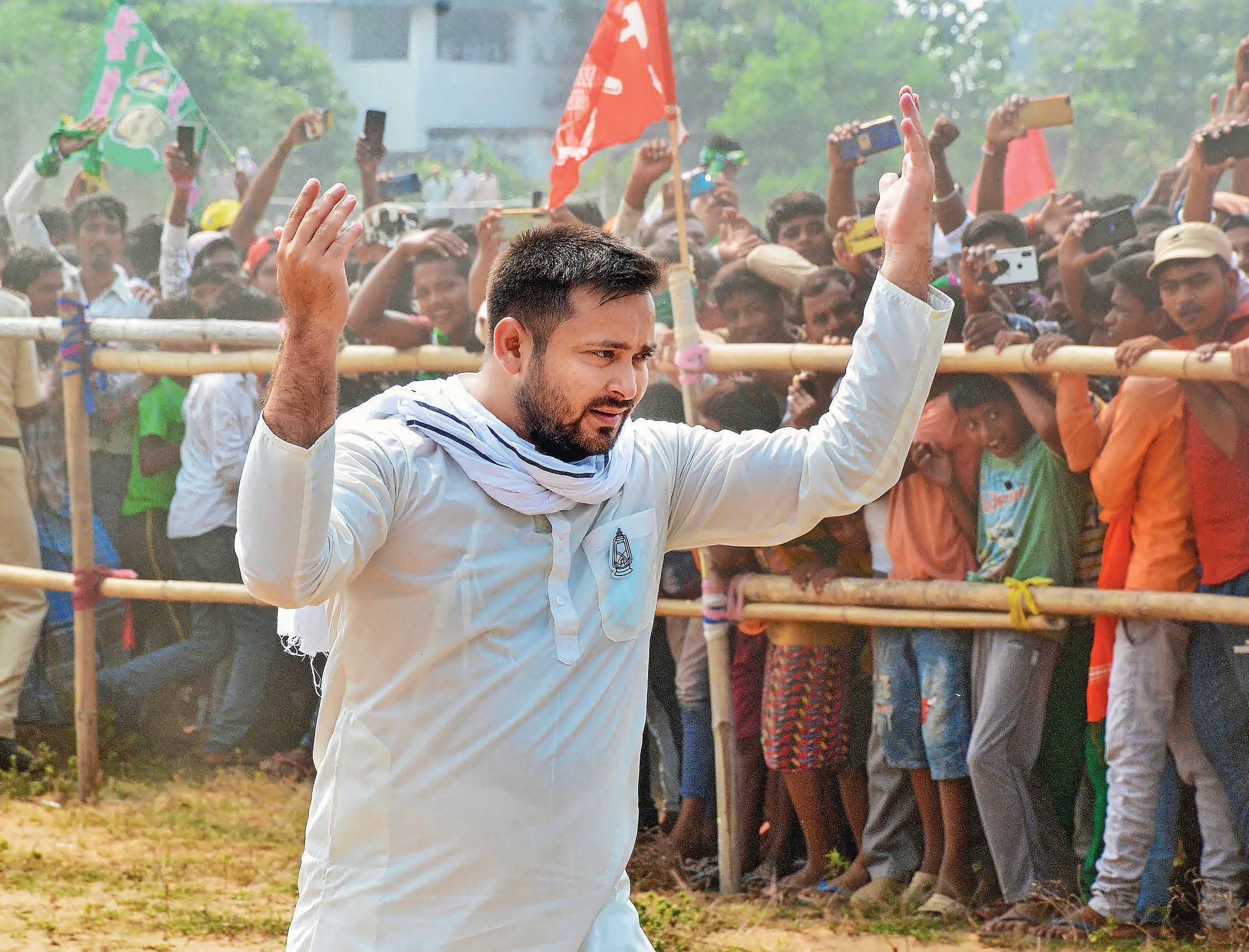 In all his meetings, Tejashwi raises his hand and moves it in a circular motion. “It signifies change,” he would explain. The crowds respond to it doing the same. And, from a formidable advantage for the BJP-JDU alliance, the situation on the ground has started changing. Tejashwi let go of two allies— Jitan Ram Manjhi and Upendra Kushwaha—to accommodate the left parties in his Grand Alliance.

“The state certainly needs jobs, and better education opportunities,” said 21-year-old Kumar Vikram of Patna. “We hear a lot that things have changed as compared with the Bihar of the past, but it is when we travel outside that we realise that the state is still missing so much. Everyone wants things to happen quickly. While Tejashwi is saying a lot of things, we also need stability as Modi promises.”

Nitish still remains the most recognisable leader in the state, but his party’s campaign has been more subdued than that of the BJP and the RJD. The 69-year-old socialist, known for sticking to propriety and sobriety in public life, was instantly noticed when he lost his cool on more occasions than one when some people interrupted his speech.

As Nitish sticks to his speeches delivered with the sagacity of a veteran leader, the people, especially the aspirational youth, are impatient after months of lockdown, reverse migration, lack of employment and recurring floods. So, anyone promising them a change beyond the bijli-pani-sadak narrative is drawing the crowd, be it Narendra Modi or Tejashwi Yadav, or even late entrant Chirag Paswan. While unemployment has become an issue in the elections, Nitish Kumar does not appear to be convincingly addressing it, as he often skips mentions of Covid and migration.

Sanjay Jha, minister and a close aide of Nitish, said all the opinion polls had predicted NDA’s victory. “Nitish Kumar has worked for 15 years,” he said. The glum faces at the party's Veerchand Patel Marg office, however, tell a different story. “There is a concern that the CM is not getting as much response as expected,” said an insider. The party is also worried about the strong anti-incumbency factor.

The undercurrent for change has nudged the other parties to nuance their campaigns. The BJP is relying heavily on Modi's appeal. Its publicity materials have only Modi's pictures; Modi's cut-outs are used in all rallies attended by Nitish.

In a slight change from the last time, the BJP's Bihar campaign is not as micro-managed by the centre leadership. Home Minister Amit Shah is yet to address a rally. Party chief J.P. Nadda, who had spent 20 years in Bihar as he grew up here, brings a local familiarity. The BJP is relying heavily on caste combinations. It has set up seven-member panels at booth level with representation from all castes. The saffron party seems to have realised that the message of development alone will not do. “The state has made up its mind,” said Nityanand Rai, Union minister of state for home. “It will elect an NDA government.”

The BJP's campaign suffered a setback when several of its leaders, including Deputy Chief Minister Sushil Kumar Modi, election in-charge and former Maharashtra chief minister Devendra Fadnavis, and former Union ministers Rajiv Pratap Rudy and Syed Shahnawaz Hussain, tested positive for Covid. The party is banking heavily on 12 Modi rallies that would be telecast live in 300 locations simultaneously. Nitish Kumar on an average addresses half a dozen rallies a day, and Tejashwi around 12, crisscrossing the state on choppers.