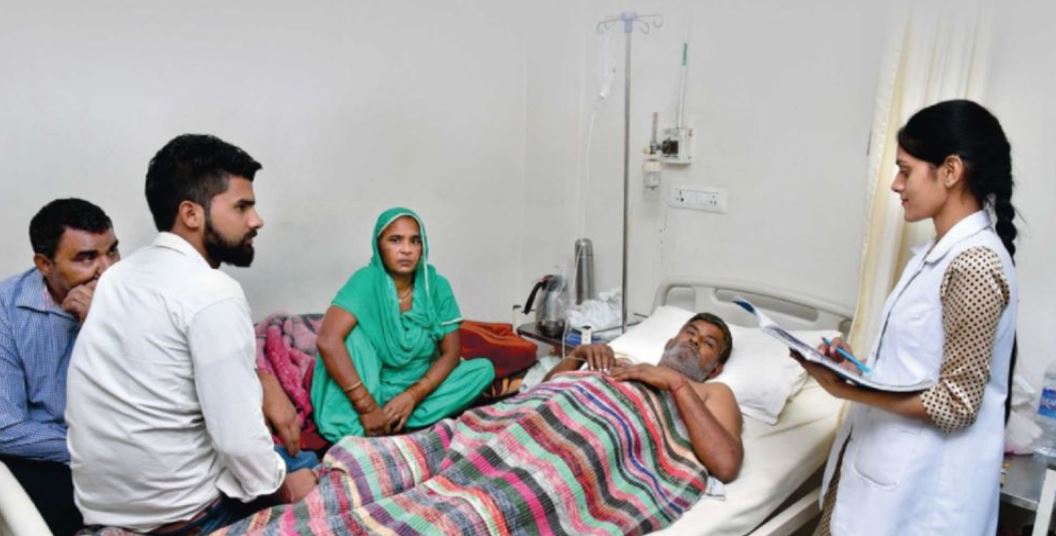 Prem Singh, 48, had learnt to live with pain. The villager from Sheikhpura in Haryana’s Karnal district was diagnosed with kidney stones earlier this year. A surgery would have cost him 35,000, apart from the cost of medicines. Singh earns only about 8,000 a month, doing odd jobs. His elder son is unemployed, and the younger son is in college. So, Singh lived with the pain. “Sometimes, I would just lie down,” recalled Singh. “At other times, I would take a painkiller.”

In the last week of October, his family decided to take him to Pt Bhagwat Dayal Sharma Post Graduate Institute of Medical Sciences, Rohtak. Just then, a neighbour told them about a scheme under which Singh could have surgery at a private hospital a few kilometres from their village. So, they went to the 39-bed Shree Hari Hospital in Karnal with their ration cards and Aadhaar cards. Lying in the hospital’s general ward after the stone removal surgery, Singh said: “We did not have to pay for the surgery and medicines. I am feeling better now.”

In the next ward, Vijay Kumar, 26, was counting his blessings. His mother and sister were diagnosed with dengue, and he had spent about 4,000 on the initial treatment at a hospital in his village. When he was advised to go to a city hospital for better treatment and avail the benefits of Ayushman Bharat-Pradhan Mantri Jan Arogya Yojana (PM-JAY), Kumar brought his mother and sister to Shree Hari Hospital. “We would not have been able to manage, had the treatment not been free,” said Kumar.

For both Singh and Kumar, the hospital followed a complex, multi-layered process of registration and obtaining approvals on the PM-JAY portal, the staff said. At smaller hospitals like Shree Hari Hospital, which operate with limited staff, it is a process they are struggling with. “We have to deploy one person with the PM-JAY patient, so that all the processes are completed properly,” said a staff member. An official of the State Health Agency in Karnal said the process was even more challenging in government hospitals, where doctors were busy and had no time to fill up forms and follow the scheme’s protocol.

PM-JAY, dubbed Modicare, promises to provide an insurance cover of 5 lakh to 10 crore families. It works through a portal, one that each empanelled hospital has access to with its own login ID and password. The designated staff for the scheme, called Arogya or Ayushman Mitra, begins the process by verifying patient details on the portal with an ID, and completes the process by getting their biometrics done, before sending it to the state authority for approval.