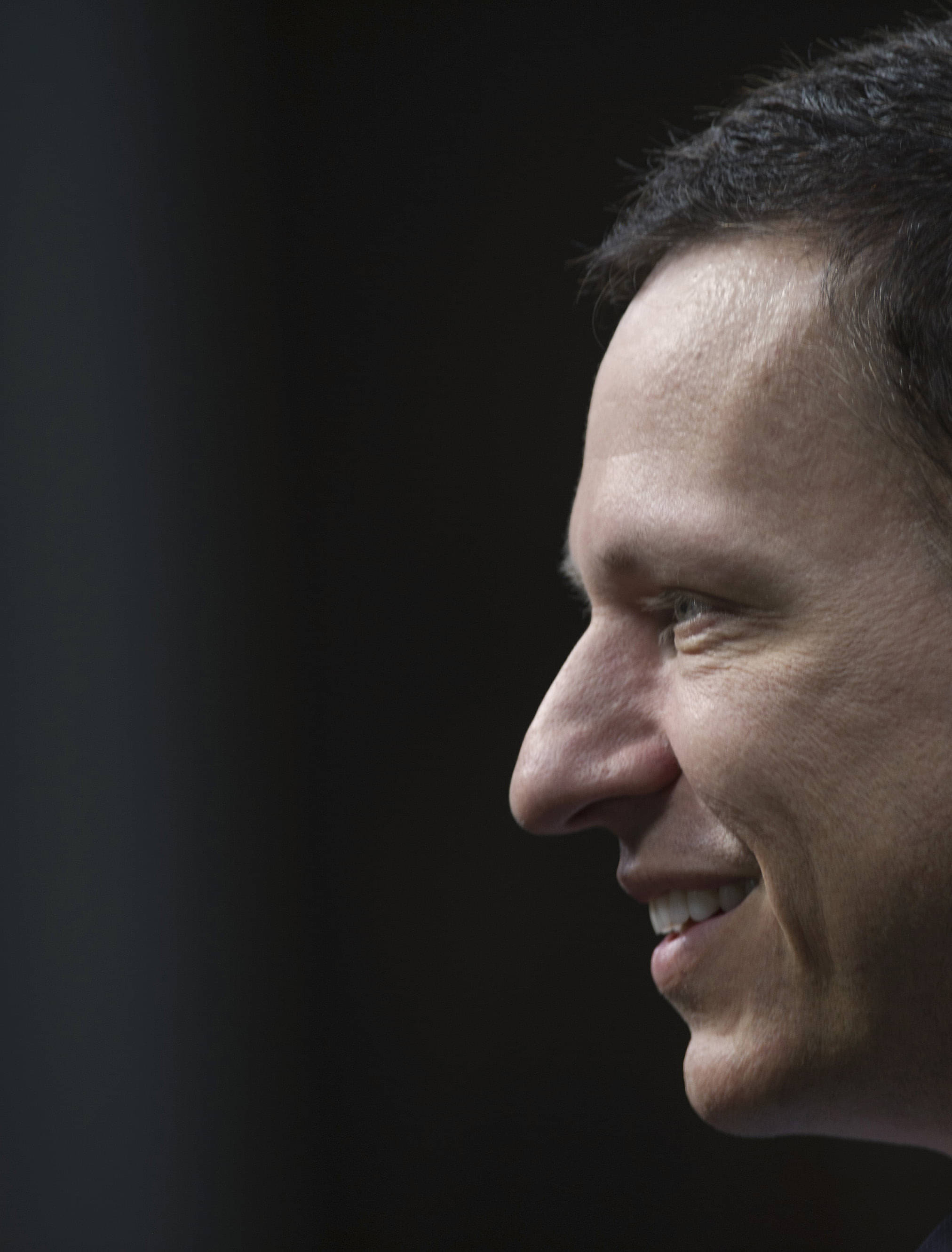 THE TECH BILLIONAIRE AND HIS CONTRARIAN CIRCLE ARE DEVELOPING NEW NATIONALIST VISIONS FOR AMERICA’S FUTURE.

ELEVEN DAYS AFTER the first case of an American suffering from COVID-19 was reported, an essayist at an online journal run by the Claremont Institute—whose stated purpose is to “restore the principles of the American Founding to their rightful, preeminent authority in our national life”—argued that a sensible response would be to prohibit humans from crossing oceans. “The obvious solution to an emerging pandemic,” wrote Curtis Yarvin in The American Mind, “is cutting off flights to China, then all air travel across the Pacific, then across the Atlantic.”

This was more than an extreme emergency reaction to an extreme emergency crisis. Yarvin was using COVID-19 as a news hook to push the long-term strategic goal, common among a curious new subset of conservatives, to “refute internationalism” and replace it with an “isolationist vision.” Imagine a world, he mused, “where travel between hemispheres is cut off next week—and stays cut off for years, decades, centuries.... Would this be a disaster? No—it would actually be fine.” After all, Yarvin averred in a trollishly insincere pivot, unmolested global wandering destroyed the vibrant cultures of the mysterious Far East, reducing their unique citadels to just more tawdry simulacra of Boston.

Who is Curtis Yarvin, and what was this atavistic assertion doing under the aegis of Claremont, a staid conservative institution founded by disciples of the late political philosopher Harry Jaffa? The Claremont Review of Books, for most of its two-decade run, has been a polite repository for intellectual conservatism. Jaffa, for his part, had defended the legacy of Abraham Lincoln to many then-skeptical fellow conservatives while elevating the equality of man to near-mystical primacy in the American founding.

Claremont’s web journal The American Mind, though, was launched in 2018 with a more provocative agenda: to “rethink the ideological framework of the American Right.” The animating idea, founding editor Matthew Peterson explains, is that traditional right-of-center groups are out of touch: They don’t even realize that their own staffs include “people under 35” who “fundamentally disagree with supposedly fundamental [classical liberal] tenets of their organization. No one wants to hear or deal with it. They want to stick their heads in the sand.” A vibrant and ideologically adventurous new conservative movement, Peterson says, is “bubbling beneath the surface, or even online all over the place. We are not supposed to talk about these things or engage that movement?”

Yarvin is perhaps better known for the pen name under which he rose to internet fame in the late 2000s and early 2010s: “Mencius Moldbug.” At his Unqualified Reservations blog, Moldbug, a software entrepreneur by day, unspooled head-spinningly long-winded “neo-reactionary” screeds, wielding a broadsword of abandoned pre-Enlightenment wisdom against the squalid lies of equality, democracy, and the smothering tyranny of what he called the communist-progressive “Cathedral.” Back then, the Cathedral ruled the discourse so totally and viciously that it wasn’t prudent—perhaps wasn’t even safe—to burden Moldbug’s true identity with his brutally honest thoughts. But TechCrunch outed Moldbug as Yarvin in 2013, and in the Trump era he seems happy enough to publicly be himself.

Yarvin, a follower of the 19th-century British polemicist Thomas Carlyle, is the type of outside-the-box thinker who argues that monarchy is inherently better than democracy, that street crime is more of a danger to his readers’ lives than all of government’s depredations, and that one of the worst sins of modernity is that people refuse to speak candidly about IQ differences across human types. Such notions are by no means new to the American right, but they feel fresh again in 2020 not only because libertarianism has made some inroads against conservative traditionalism over the last few decades but also because Yarvin’s extreme anti-cosmopolitanism comes with a genuinely modern twist: He is connected, via friendship, venture capital, and at least some ideological affinity, with one of America’s wealthiest and most controversial men, the tech tycoon Peter Thiel.

Thiel, whom the George Mason economist Tyler Cowen in 2019 called “the most influential conservative intellectual with other conservative and libertarian intellectuals,” is co-founder of PayPal, the big data analytics firm Palantir Technologies, and the trailblazing venture capital group Founders Fund. The latter entity has funded Yarvin’s software company Tlon, the company’s CEO, Galen Wolfe-Pauly, told The Verge in 2017. Yarvin and Thiel watched the 2016 election results together, according to a BuzzFeed-obtained email exchange between Yarvin and alt-right provocateur Milo Yiannopoulos.

“Peter needs guidance on politics for sure,” Yiannopoulos posited in one of the messages.

Both Thiel and Yarvin trace the ruination of our tech, education, and governing culture to the dominance of progressive political correctness. Associates of Thiel say the financier does not consider himself “neo-reactionary,” though he did write as far back as 2009 that “I no longer believe that freedom and democracy are compatible.” That was the same year Yarvin, as Moldbug, wrote that “socialism and fascism produce a mix of substandard and disastrous results, for a simple reason: both originate in democracy, a precancerous growth always pregnant with some malignancy.”

Prior to Donald Trump’s presidential campaign, Thiel moved through the 21st century like a mysterious science fiction wizard of finance. He was, among other things, the first key outside investor in Facebook (a company on whose board he remains, albeit as a kind of loyal opposition), and he has pumped his V.C. winnings into such colorfully contrarian projects as private space travel, new floating countries, and the quest for human immortality. He paid for the lawsuit that bankrupted the web tabloid Gawker, encouraged kids to drop out of college by offering them prizes via his Thiel Fellowship program, and argued that the ultimate entrepreneurial goal was to create and control a monopoly. In short, he made himself the patron saint of the kind of libertarian-adjacent intellectual exercises that most normies find obscure and sometimes alarming.

Since striding on stage at the 2016 Republican National Convention to tout Trump as an agent for reversing American decline, though, Thiel and his ideas have graduated from the ideological margins to the vanguard of 21st-century conservatism. He is now the wealthiest ally, if not quite the most generous funder, of the new conservative nationalist movement, becoming that rare radical right-winger whose dinner parties are covered by the establishment scorekeepers at Vanity Fair.

Sources within the national conservative space say they see no signs Thiel intends to become a financier, in the mode of Charles Koch or George Soros, of the new nationalist conservatism as a political cause. But the fact that the often-reticent Thiel has taken to speaking at national conservative conferences and writing gnomic essays in the Christian traditionalist journal First Things may say more about the depth of his engagement than does his check writing.

This new ferment involving and surrounding Thiel (a man who still occasionally refers to himself as libertarian) shows that ideas libertarians once thought were reasonably and blessedly settled on the right—that industrial subsidies and high tariffs make the world poorer while giving too much power to corrupt and inefficient governments, say, or even that people shouldn’t be sentenced to forever reside on whatever landmass they happened to be born on—are now up for grabs.

WHAT DOES THIEL WANT?

THROUGH HIS OVERLAPPING social and intellectual worlds of venture capital, goal-oriented philanthropy, and Overton window– moving conservatism, Thiel has helped create a kind of rolling debate society in which entrepreneurs and technologists trade ideas with politicians and theorists. This “Thielosphere,” says Patri Friedman, is “more willing to engage with deliberately transgressive ideas” than are most groups aiming for concrete power and influence in America.