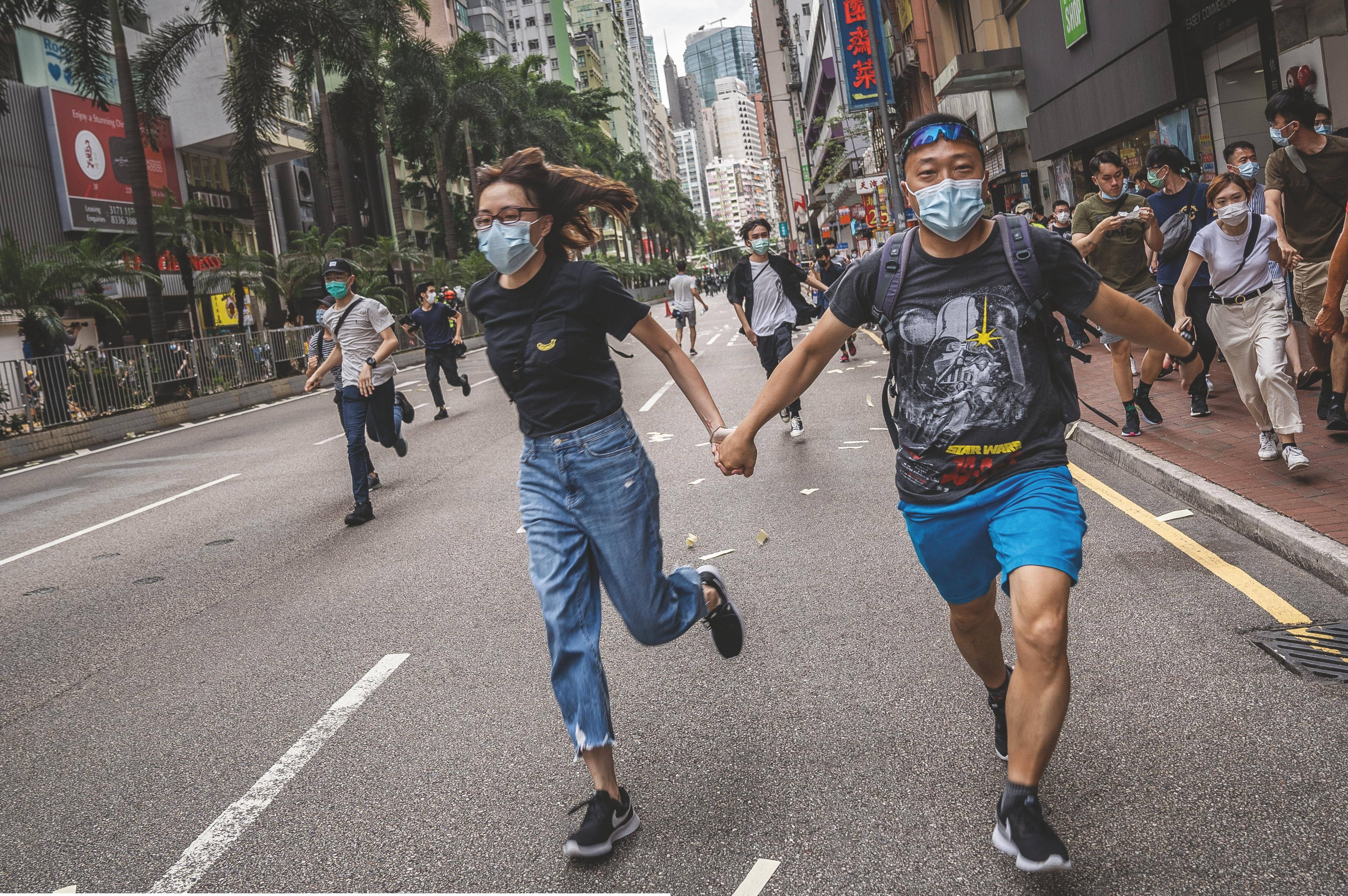 THE ESCALATION IS PART OF A STRATEGY TO UNMASK CHINA’S ABUSES BEFORE THE WORLD.

ROB YORK
ON THE FIRST Saturday of October 2019, people across the Hong Kong Special Administrative Region (SAR) woke to something they’re not accustomed to: nonfunctioning public transportation. As on many weekends since last June, there had been demonstrations the previous night against the Hong Kong government and the influence exerted on it by the People’s Republic of China (PRC). However, with the SAR government having just announced its intent to ban face masks—which protesters had been using to conceal their identities and prevent reprisals— the anti-government forces escalated.

The Mass Transit Railway (MTR)—the SAR’s renowned subway system—had been ransacked. Grocery stores and shopping centers had closed preemptively to prevent vandalism. Across the walls of the station near where I lived, one could find messages spray-painted by protesters. I took pictures, noting the sentiments: “History will absolve us”; “No turn back for HK”; “no freedom I would rather die”; and—most ominously—“If we burn You burn with us.”

Last year’s protests began as a response to the Hong Kong government’s proposed amendment to the territory’s extradition law, which would have allowed certain criminal suspects to be sent to mainland China for trial. This roused Hongkongers, accustomed to their highly regarded and politically independent judicial system, and fearing the prospect of rendition to the mainland’s much less regarded (and much less independent) system. This, they said, would be the death knell for “one country, two systems,” which allows Hong Kong to retain a number of rights, such as free speech, a free press, and a fair trial, that are largely absent on the mainland.

The protests started peacefully enough. On the weekends leading up to June 12, when a vote on the bill was scheduled, crowds sometimes exceeding 1 million participants turned out to march. But when the loyalist Hong Kong government dismissed these demonstrations and went ahead with plans to vote on the amendment, the protesters broadened both their objectives and their tactics. On June 12, a group of protesters, estimated at 40,000 strong, blocked entry into the Hong Kong Legislative Council. When they charged police barricades, the police responded with tear gas, pepper spray, and rubber bullets. Arrests were made, and dozens had to be treated at local hospitals.

The Hong Kong government got the message, suspending the bill and vowing not to resurrect it. But it was too late: The protesters wanted Chief Executive Carrie Lam out of office, along with universal suffrage, amnesty for arrested protesters, and the formal withdrawal of the bill. They also demanded a comprehensive inquiry into the conduct of the Hong Kong Police Force, which had been filmed on June 12 beating protesters and firing tear gas canisters at nonviolent demonstrators, reporters, and even first responders.

“Five demands, not one less!” became the protesters’ rallying cry—a signal that they would not be pacified by half-measures.

“Hongkongers have made it very clear that the five demands have to be met,” says Sophie Mak, a researcher for Amnesty International based in Hong Kong. They’re increasingly willing to resort to violence to ensure that life in the city does not go on normally if they don’t get their way. Is the escalation merely a symptom of pent-up anger, or is it part of a considered strategy to unmask China’s abuses before the world?

WELL BEFORE 1997, the year the U.K. turned Hong Kong over to Beijing’s control, there were doubts as to whether the territory would continue to enjoy free markets, free speech, and freedom of the press under Chinese Communist Party (CCP) rule. Yet in the early years after the handover, Beijing kept interference in Hong Kong’s affairs to a minimum, seeming content to profit from its lax regulatory environment.

“It’s China’s gateway,” says Richard Harris, CEO of Hong Kong–based Port Shelter Investment Management and a longtime resident of the city. “It can be China when China needs it to be; it can be different from China when China needs it to be.” Hong Kong had been treated as a hub of trade by the British from the early 1840s, Harris says, and “it’s very difficult to erase 170 years of free market thinking.”

Underneath that success, however, a younger generation of Hongkongers began to grow restless. They looked at Article 45 of the Basic Law—the territory’s mini-constitution—and were eager to see Beijing make good on its promise that “the ultimate aim is the selection of the Chief Executive by universal suffrage upon nomination by a broadly representative nominating committee in accordance with democratic procedures.” Currently, the chief executive is chosen by an election committee stacked with Beijing supporters.

In 2014, angry over signals that the PRC government would never allow truly free elections in the territory, young protesters and pro-democracy politicians took part in what became known as the Umbrella Movement. Demonstrating outside government headquarters and blocking major city intersections (hence the movement’s other name: “Occupy Central”), protesters briefly captured the world’s attention. But the effort ended after just two and a half months with no real reforms to show for it.

Five years later, when the Beijing loyalists who govern Hong Kong hatched the idea for the extradition amendment, it seemed people had finally had enough. And not just young radicals; these protests enjoyed far broader public support than the Umbrella Movement had. As Mak puts it, “2019 was a year where most Hong Kong citizens opened their eyes to and became aware of CCP’s transparent and blatant encroachment of Hong Kong’s autonomy. The Hong Kong government’s incompetence and CCP’s increasingly oppressive and iron-fisted rule had forced people to come out on the streets to communicate their dissatisfaction.”

Joshua Wong, who rose to fame during the 2014 movement and remains a prominent critic of Beijing and its loyalists in Hong Kong, says 2019 proved that “Hong Kong people are dedicated and competent to fight for a brighter future and never kowtow to China under the oppressive regime.”