The Chemists And The Cover-Up 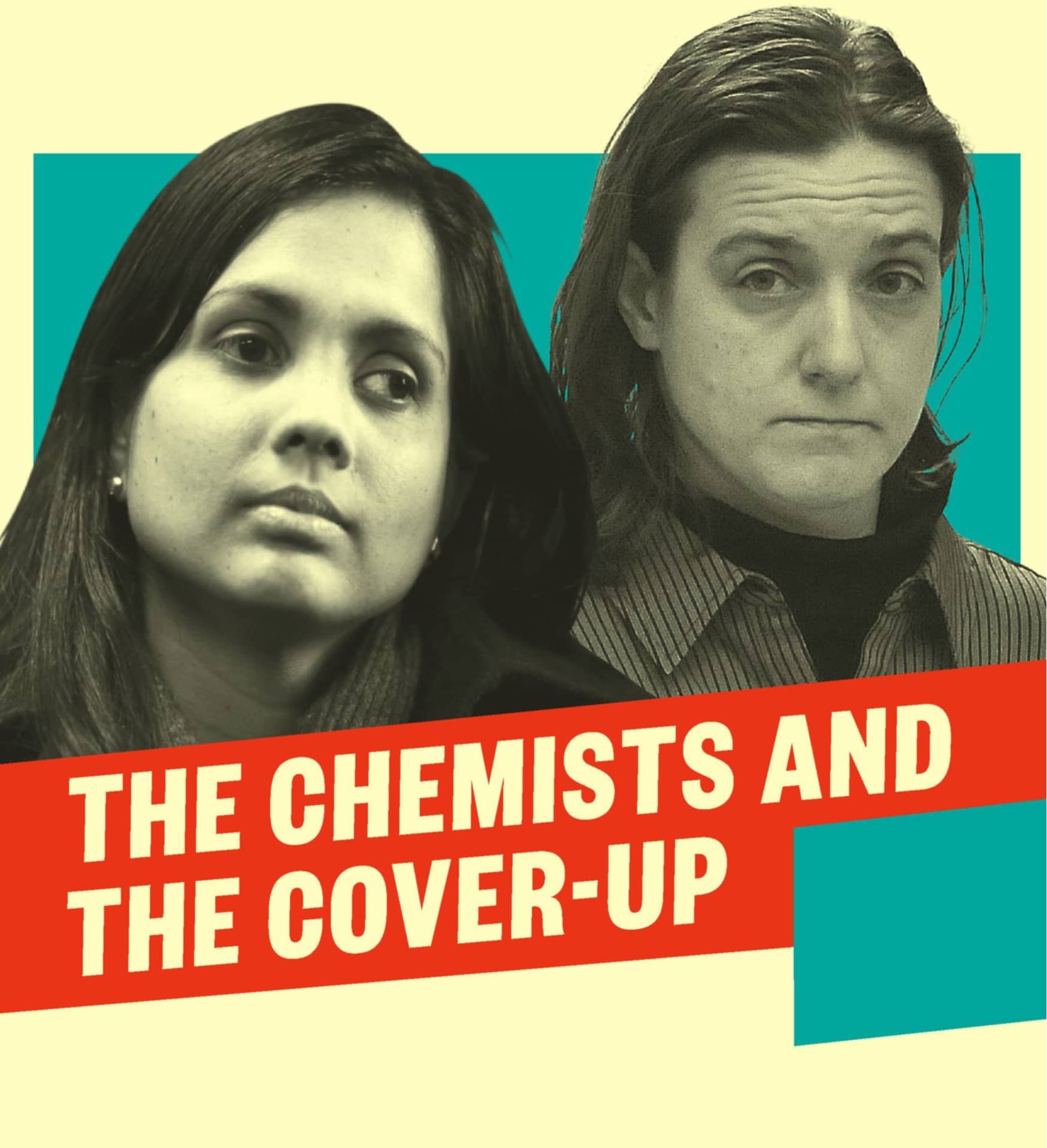 “TRIED TO RESIST using @ work, but ended up failing,” the forensic chemist scribbled on a diary worksheet she kept as part of her substance abuse therapy. “Going to use phentermine,” she wrote on another, “but when I went to take it, I saw how little (v. little) there is left = ended up not using.”

The chemist, Sonja Farak, worked at the state drug lab in Amherst, Massachusetts, for more than eight years. Her notes record on-the-job drug use ranging from small nips of the lab’s baseline standard stock of the stimulant phentermine to stealing crack not only from her own samples but from colleagues’ as well. On another worksheet chronicling her struggle not to use, she described 12 of the next 13 samples assigned to her for testing as “urge-ful.”

State police took these worksheets from Farak’s car in January 2013, the same day they arrested her for tampering with evidence and for cocaine possession. The lead prosecutor on Farak’s case knew about the diaries, as did supervisors at the state attorney general’s office. And yet, despite explicit requests for this kind of evidence, state prosecutors withheld Farak’s handwritten notes about her drug use, theft, and evidence tampering from defense attorneys and a judge for more than a year.

Farak’s reports were central to thousands of cases, and the fact that she ran analyses while high and regularly dipped into “urge-ful” samples casts doubt on thousands of convictions. But without access to evidence showing how long Farak had been doing this, defendants with constitutional grounds for challenging their incarceration were held for months and even years longer than necessary.

Farak wasn’t the first Massachusetts chemist to tamper with drug evidence. In fall 2012, just five months before her arrest, Annie Dookhan confessed to faking analyses and altering samples in the Boston testing facility where she worked.

The twin Massachusetts drug lab scandals are unprecedented in the sheer number of cases thrown out because of forensic misconduct. Between the two women, 47,000 drug convictions and guilty pleas have been dismissed in the last two years, many for misdemeanor possession. Many more are likely to follow, with the total expected to exceed 50,000.

Both scandals undercut confidence in the criminal justice system and the validity of forensic analysis. And both pose the obvious question about how chemists could behave so badly for years without detection.

This story is an effort to reconstruct what was known about Farak and Dookhan’s crimes, and when, based on court filings, diaries, and interviews with the major players.

Dookhan’s transgressions got more press attention: Her story broke first, she immediately confessed, and her misdeeds took place in big-city Boston rather than the western reaches of the state. But the Farak scandal is in many ways worse, since the chemist’s crimes were compounded by drug abuse on the job and prosecutorial misconduct that the state’s top court called “the deceptive withholding of exculpatory evidence by members of the Attorney General’s office.”

Thanks largely to the prosecutors’ deception, the Massachusetts Supreme Judicial Court in October 2018 was forced to dismiss thousands of cases Farak may never have even touched, including every single conviction based on evidence processed at the Amherst lab from 2009 to the day of Farak’s arrest in 2013. The court also dismissed all meth cases processed at the lab since Farak started in 2004. At least 11,000 cases have already been dismissed due to fallout from the scandal, with thousands more likely to come.

Because state prosecutors hid Farak’s substance abuse diaries, it took far too long for the full timeline of her crimes to become public. In the aftermath, the court felt it necessary to make clear that “no prosecutor...has the authority to decline to disclose exculpatory information.”

Looking back, it seems that Massachusetts law enforcement officials, reeling from the Dookhan case, simply felt they couldn’t weather another full-fledged forensics scandal. Maybe fatigue made them sloppy, or perhaps they actively chose to look the other way as evidence piled up about the enormity of Farak’s crimes. But why were a small handful of prosecutors allowed total control over evidence about one of the worst criminal justice failures in recent memory?

“IT WAS ALMOST like Dookhan wanted to get caught,” one of her former co-workers told state police in 2012.

Yet Dookhan’s brazen crimes went undetected for ages. In the eight and a half years she worked at the Hinton State Laboratory in Boston, her supervisors apparently never noticed she certified samples as narcotics without actually testing them, a type of fraud called “dry-labbing.” And when the tests she did run came back negative, Dookhan added controlled substances to the vials. Or she just lied about her results altogether: In one of the more ludicrous cases, she testified under oath that a chunk of cashew was crack cocaine. Even the master’s degree on her résumé was fabricated.

The Hinton drug lab, operated by the Massachusetts Department of Public Health, appears to have been run largely on the honor system. It had no surveillance cameras, laughable security on evidence safes, and “laissez faire” management, which the state inspector general determined was the “most glaring factor that led to the Dookhan crisis.”

But another co-worker was suspicious, particularly since he “never saw Dookhan in front of a microscope.”

Dookhan’s output remained implausibly high even after the U.S. Supreme Court ruled in Melendez-Diaz v. Massachusetts (2009) that defendants were entitled to cross-examine forensic chemists about their analysis. Poetically, that landmark case originated from the Hinton lab, although Dookhan didn’t conduct the analysis in question.

Martha Coakley, then attorney general for the state, argued in Melendez-Diaz that a chemist’s certificate contains only “neutral, objective facts.” If chemists had to testify in person, Coakley warned melodramatically, misdemeanor drug prosecutions “would essentially grind to a halt.”

Prosecutors nationwide pretty uniformly backed this argument, which the Supreme Court rejected in a 5–4 opinion. “Forensic evidence is not uniquely immune from the risk of manipulation,” Justice Antonin Scalia wrote for the majority. “A forensic analyst responding to a request from a law enforcement official may feel pressure—or have an incentive—to alter the evidence in a manner favorable to the prosecution.”

Scalia may as well have been describing Dookhan. In a letter filed with the Supreme Court, Julianne Nassif, a lab supervisor, wrote that Hinton had “appropriate quality control” measures. This was not true, as Nassif’s department later conceded. “Dookhan’s consistently high testing volumes should have been a clear indication that a more thorough analysis and review of her work was needed,” an internal review found.

After the Supreme Court’s decision, a skeptical colleague started tracking how many microscope slides Dookhan used to test samples for cocaine. Dookhan was now spending less time at her lab bench and more time testifying in court about her results. Finding that there did not appear to be enough slides in Dookhan’s discard pile to match her numbers, the colleague brought his concerns to an outside attorney, who advised he should be careful making “accusations about a young woman’s career,” he later told state police.

It ultimately took a blatant violation to expose Dookhan, and even then her bosses twisted themselves in knots to hold on to their “super woman.”

In June 2011, Dookhan secretly took 90 samples out of an evidence locker and then forged a co-worker’s initials to check them back in, a clear chain-of-custody breach. Nassif considered it a lapse in judgement, but not a disqualifying one; Nassif’s boss didn’t think it necessary to alert the prosecutors whose cases relied on the samples, much less the defendants.

Nassif put Dookhan on desk duty but allowed her to finish testing cases already on her plate, including some of the samples she had taken from the locker. Her access to evidence was not restricted, and she continued testifying in court.

Democratic Gov. Deval Patrick’s office didn’t learn about the protocol breach until December 2011. Coakley’s office finally launched a criminal investigation in July 2012, more than a year after the infraction was discovered by Dookhan’s supervisors.

In her initial police interview, given at her dining room table, Dookhan said she “would never falsify” results “because it’s someone’s life on the line.” Shown results suggesting otherwise, she copped to contaminating samples “a few times” during the previous “two to three years.”