TRUMP'S TRADE WAR MADE THE PANDEMIC WORSE, AND NATIONALISM WILL SLOW THE RECOVERY 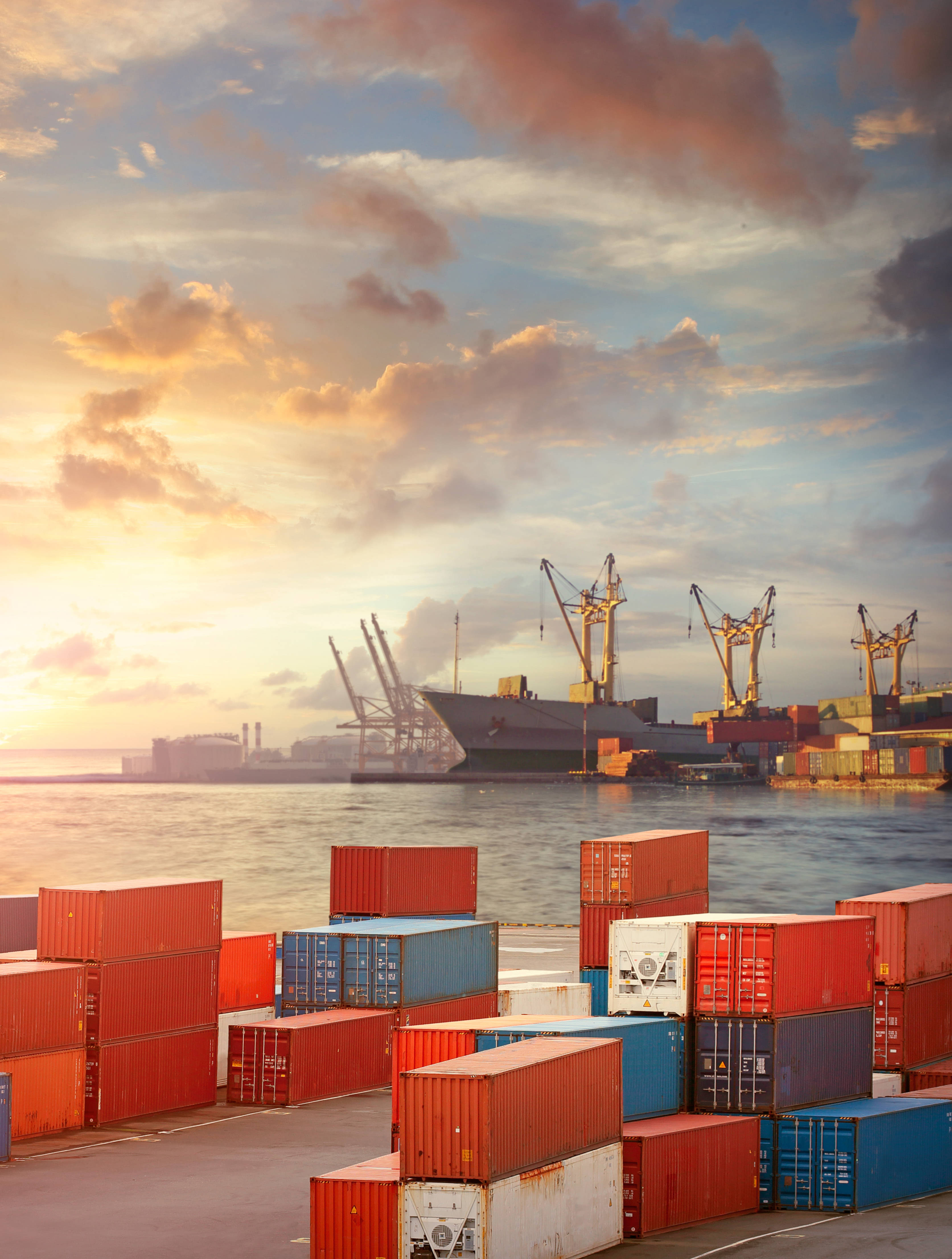 PROTECTIONISM IS NOW INFECTING THE GOP TO A DEGREE THAT MAY BE DIFFICULT TO ERADICATE WHEN THE TRUMP ERA ENDS.

“ONE OF THE things this crisis has taught us,” Peter Navarro, a top administration economic adviser, explained from behind the podium in the White House’s briefing room, “is that we are dangerously over-dependent on a global supply chain.”

It was April 2, and, after weeks of largely ignoring COVID19 as it spread around the world and into the United States, the Trump administration was finally taking the pandemic seriously. That is to say, it was responding in much the same way as it has throughout President Donald Trump’s tenure: by finding new ways to use old laws to expand federal power—particularly power over the free exchange of goods across international borders.

As the novel coronavirus swept the globe and jammed up international supply lines, Navarro was appointed policy coordinator for the White House’s use of the Defense Production Act—a relic of the Korean War era originally intended to allow the federal government to requisition goods to supply the military in a time of crisis. Trump and Navarro have used the law to redirect portions of the economy in an effort to address civilian needs, scrambling markets in the process.

Along the way, they targeted foreign trade too. For Trump, Navarro, and the other neo-nationalists increasingly setting policy for the post-2016 Republican Party, America’s modern problems mostly stem from goods and people coming across the country’s borders. If a problem can’t be blamed on immigration, it probably will get blamed on trade. Sometimes both. And the neo-nationalists weren’t about to let the coronavirus crisis go to waste.

“If we learn anything from this crisis,” Navarro said in April, “it should be: Never again should we have to depend on the rest of the world for essential medicines and countermeasures.”

This framing sounds like simple electoral politics. The Republican Party hopes to use the pandemic as an opportunity to double down on Trump’s “get tough on China” message that helped deliver key Rust Belt states in 2016.

But it’s more than that. Protectionism is now infecting the GOP to a degree that may be difficult to excise when the Trump era ends. Leading Republican lawmakers such as Sens. Josh Hawley (R–Mo.) and Marco Rubio (R–Fla.), who have been cheerleading Trump’s misguided tariff policy for years, are already positioning the coronavirus as an excuse to use federal power to reshape global trade. Even some formerly anti-Trump conservatives have been swayed into backing a nationalist vision of an America that must stand up to China or be swallowed by it. The COVID-19 outbreak has served only to confirm their fears.

“America must never again rely on China for our medical supplies,” Rich Lowry, editor of National Review and author of The Case for Nationalism (Broadside Books), wrote in an early April op-ed for the New York Post. Two weeks later, in an op-ed for The New York Times, Rubio claimed that America was “largely unable to import supplies from China” because China had “monopolized those critical supply chains” for “domestic consumption and their own fight against the virus.”

But this fantasy of a strong America that’s also fully self-sufficient and isolated from global supply chains—and, yes, it is a fantasy—ignores the tremendous benefits that expanded global trade has unleashed in recent decades. Under Trump, that vision was already gaining currency on the right. The pandemic, which originated in China and disrupted global trading, strengthened it further.

The right’s increasingly vocal trade skeptics have taken advantage of a crisis to advocate a national industrial policy designed not only to decouple the United States from the global trading network but to put America on dangerous Cold War-like footing with one of its biggest trade partners. In doing so, they’re pushing ideas that will leave America less prepared for the next pandemic—and have already left us less able to handle this one.

THE FALLACY OF CHINESE DEPENDENCE

THE ARGUMENT THAT the United States ought to be striving for self-sufficiency rests on a story about our dependence on foreign producers for medical equipment, drugs, and other vital products. This is an extension of how Navarro and Trump have cast China as the boogeyman responsible for a broad swath of America’s economic problems. But that story is largely untrue— or at the very least more complicated than it first appears.

Data from the World Trade Organization (WTO) show that over the past three years—both before and during Trump’s trade war with China—American consumers and businesses imported an average of $13.5 billion per year in medical supplies from China. That’s good enough to put China in fourth place, behind Switzerland ($15.5 billion annually, on average), Germany ($19.6 billion), and Ireland ($27.9 billion). America imported less than half the value of medical supplies from China in 2019 as it imported from Ireland, yet you probably didn’t hear many politicians and media personalities grandstanding about an overreliance on Irish manufacturing.

China may be more dependent on American medical exports than the other way around. That same WTO report shows that China bought more medical supplies from America than it did from any country other than Germany in each of the past three years. Is this what Navarro means when he says we are “dangerously over-dependent” on global supply chains? In reality, the world’s biggest economies are deeply interdependent.

It’s true that China is the top global exporter of personal protective equipment (PPE), hand sanitizer, and some other items necessary to combat the coronavirus. But the facts are more complicated than Rubio claims. 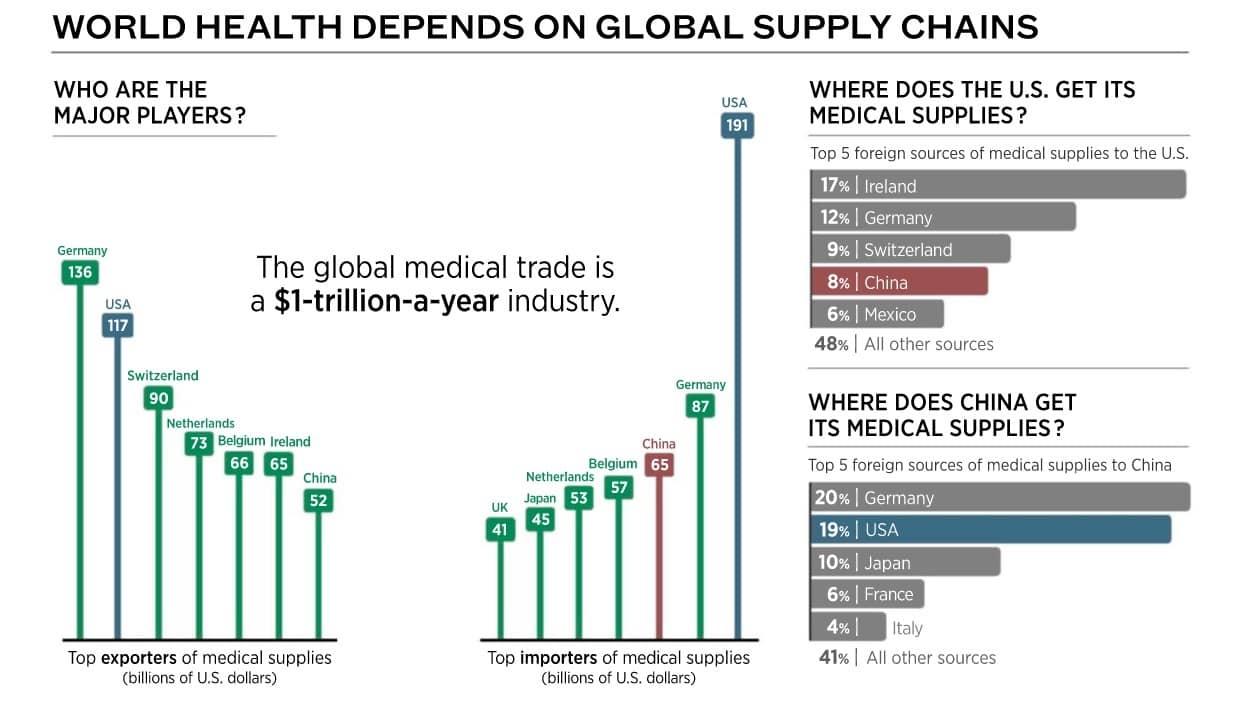 Exports of PPE from China to Europe and the United States fell by 17 and 19 percent, respectively, during the first two months of this year—but overall exports to those same destinations fell by 20 and 28 percent, respectively, during the same period. This suggests the drop was a reflection of global economic conditions rather than a protectionist measure imposed by China on its trade partners. Exports of PPE from China to the rest of the world then increased in March, as the virus abated there and factories reopened, according to data analyzed by Chad Bown, a senior fellow at the Peterson Institute for International Economics (PIIE), a trade-focused think tank. Still, massive worldwide demand has continued to outstrip supply.

What about pharmaceuticals? In February, the Food and Drug Administration (FDA) touched offa brief panic with a statement warning that the coronavirus outbreak in China could disrupt supply chains and lead to a shortage of drugs in America. The neo-nationalists pounced. In a February letter to the FDA, Hawley called America’s supposed dependence on Chinese-made drugs “inexcusable.” Part of the Coronavirus Aid, Relief, and Economic Security (CARES) Act, the $2.3 trillion aid bill passed by Congress and signed by Trump in March, calls for the Department of Health and Human Services to develop “strategies to...encourage domestic manufacturing” of pharmaceuticals. By May, the Trump administration had approved a $350 million grant for a little-known Virginia company that promised to make drugs in the United States. “This is a great day for America,” Navarro proclaimed at a press conference.

In the rush to throw taxpayer money at the problem, the White House didn’t wait to see if a problem actually existed. On June 2, an FDA official testified that the agency had found no evidence of shortages of drugs caused by foreign governments restricting exports.

The truth is that America’s global supply lines for pharmaceutical drugs are actually quite diverse and resilient. There are roughly 2,000 manufacturing facilities around the world authorized by the FDA to produce active pharmaceutical ingredients for American consumers; only 230 of those are in China. Some 510 are in the United States, and 1,048 are in the rest of the world. The supply chains for the 370 drugs on the World Health Organization’s list of “essential medicines,” which includes “anesthetic, antibacterial, antidepressant, antiviral, cardiovascular, anti-diabetic, and gastrointestinal agents,” are similarly global: 21 percent of production facilities are in the United States, with 15 percent located in China and 64 percent located somewhere else.