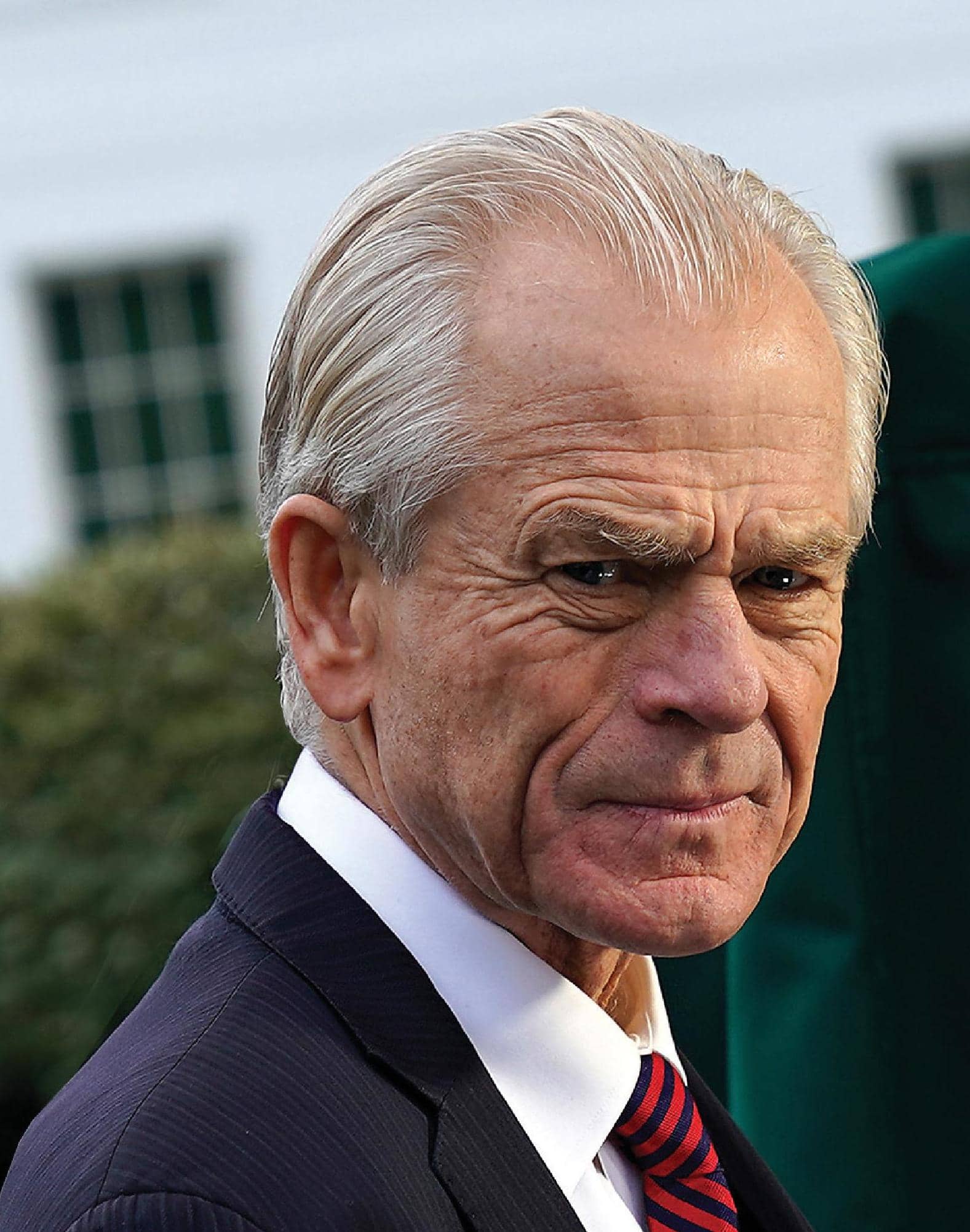 PETER NAVARRO IS a loser. Literally.

He has run for office five times and never won. He has never gained approval from the Senate to occupy an official cabinet post. He started a trade war that may not technically be lost yet, but it hasn’t been a roaring success by any account.

And yet, somehow, he’s become one of the most powerful people on the planet.

In a presidential administration that quickly jettisoned the few serious economists who signed on to help steer it away from catastrophe, Navarro has been the perfect fit. He’s a tough-talking Democrat-turned-Republican who maintains a set of deeply held beliefs that influence his policy choices and who refuses to be compelled by expert opinion or facts. He has no governing experience and recognizes a few of the practical or institutional limits on governmental behavior. In many ways, he is a magic mirror for President Donald Trump: He reflects Trump’s ethos and ideas but adds enhancements and policy details that would likely otherwise elude the president.

By anointing Navarro as, effectively, the czar of a new “economic nationalism” project that disdains free trade and delivers corporate handouts to favored firms, the Trump administration—and, by extension, the GOP—hasn’t found a new formula for winning elections or countering China. Instead, Republicans have embraced a warmed-over variant of what they once would have recognized and denounced as the losing economic policies of the political left.

“I DON’T KNOW why so many people in America hate Hillary Clinton; I found her to be one of the most gracious, intelligent, perceptive, and, yes, classy women I have ever met,” wrote Navarro—yes, the same Peter Navarro—in 1999’s San Diego Confidential. The book is a thoroughly egotistical exercise: a first-person, beat-by-beat account of Navarro’s failed 1996 bid for a seat in Congress. From the perspective of 21 years later, it is also an intriguing historical artifact that is equal parts jarring and illuminating.

That’s particularly true whenever the Clintons enter the picture. In the book, Navarro lavishes praise on the then-first lady, who flew to San Diego to host a Navarro rally less than two weeks before the election. He describes the event as “a heavenly experience,” even including a copy of the next day’s front-page story in The San Diego Union-Tribune, which features a picture of Navarro and Hillary standing side-by-side onstage. When it comes to then-President Bill Clinton, Navarro takes a sharper tone: He criticizes Clinton for working with then-Speaker of the House Newt Gingrich and selling out the left-wing of the Democratic Party in the process—a wing with which the Navarro of 1999 clearly identifies.

Indeed, San Diego Confidential is chock full of anecdotes that seem out of place for someone who would eventually rise to power in a Republican White House. Navarro recalls marching in a pride parade in San Diego and makes an appeal for Democrats to recognize gay rights as a political strategy. He describes how excited he was to have Ed Asner—a famously left-wing actor who helped organize a Screen Actors Guild strike in 1980 to protest President Ronald Reagan’s foreign policy—record a “powerful and perfect” campaign ad on Navarro’s behalf. “I do not trust the Republican Party to do anything but trash the environment under the phony banner of economic progress,” he writes.

Joe Matthews, a longtime California political commentator, recently wrote in wonderment that a guy who seemed like “San Diego’s Bernie Sanders in the 1990s and 2000s”—though without the electoral success Sanders has enjoyed—could morph into a leading figure in a Republican presidential administration. The explanation, according to Matthews, offers “a lesson about what kinds of people prosper when a nation’s civic conversation becomes dominated by anger and accusation.”

Navarro was practicing a sort of quasi-populism built around resentment and self-aggrandizement long before Donald Trump appeared on the political scene. As different as the Trump of today and the Navarro of the 1990s might appear at first blush, there is an undeniable similarity that may help explain why the two have been able to work side-by-side for so long in an administration where top advisers have tended to come and go quickly.

Navarro grew up in the well-heeled suburbs of Cambridge, Massachusetts, and Bethesda, Maryland, as the child of divorced parents. He graduated from Harvard with a doctorate in economics in 1986 and promptly moved to San Diego, where his first political venture involved launching an explicitly antidevelopment organization called Prevent Los Angelization Now (PLAN). Navarro’s former spokeswoman, Lisa Ross, described the outfit in The San Diego Union-Tribune as “battling to stop big bad builders from obtaining zoning changes to convert open space and single-family home neighborhoods into a high-priced, high-rise, and high-density developments.”

It is perhaps fitting that Navarro would not only turn from a progressive Democrat into a Trumpian Republican but that he would begin his political career as San Diego’s leading NIMBY (“not in my backyard”) before rising to work for a president who made his name as a real estate developer.

Navarro’s losing streak as a politician began with a run for mayor in 1992. He finished first in a tightly contested race but failed to get a majority of the vote, then lost the subsequent runoff by fewer than 20,000 ballots. A turning point in the race came when Navarro unleashed a blistering attack on his opponent, Susan Golding, whose ex-husband had recently been convicted of money laundering. “Navarro’s attack was so gratuitous it created sympathy for Golding, who cried in the debate and rallied to win the race,” writes Matthews.

Navarro lost a city council race the following year by less than 300 votes. In 1994 he tried for a seat on the San Diego County Board of Supervisors but lost, this time by a wider margin.

By 1996, when California Democrats tapped Navarro to run against incumbent Rep. Brian Bilbray, Navarro’s personal brand was already well-established—and it wasn’t a good one. Navarro seems to have realized that. In San Diego Confidential, published a few years later, he calls himself “the cruelest and meanest son of a bitch who ever ran for public office in San Diego.” Larry Remer, a campaign consultant who worked on some of those losing campaigns, described Navarro to Politico earlier this year as “the biggest asshole I’ve ever known.”

The 49th District race in 1996 was a crucial battleground, as Democrats tried to wrest control of Congress after the “Republican Revolution” of two years prior. Hillary Clinton’s last-minute campaigning was insufficient to change San Diego’s opinion of Navarro or to overcome the power of incumbency. He lost to Bilbray by more than 10 points. After one more defeat at the ballot box, in a race for city council in 2001, it looked like Navarro was done with politics.

But he wasn’t done being controversial. Navarro, who has maintained a position at the University of California, Irvine, since 1989 as a professor of economics and public policy, spent the early 2000s writing pop-investment advice books; 2003’s If It’s Raining in Brazil, Buy Starbucks is probably the most well-known of the bunch. Besides dispensing meteorological stock trading tips, Navarro used the book to opine on the state of global trade. He also debuted the fictional “Ron Vara,” introduced as a plucky Harvard grad and Desert Storm veteran who’d allegedly made a small fortune by shorting nuclear stocks on the eve of the Chernobyl disaster.

Although initially introduced as a stock character in a book full of them—each chapter in If It’s Raining opens with a small narrative about an obviously fictional person—Navarro went on to use Ron Vara, an anagram of the author’s last name, with less context in future books. The Chronicle of Higher Education found in 2019 that Navarro had quoted Vara more than a dozen times in six books. In a statement to the Chronicle, Navarro claimed that Vara was nothing more than a “whimsical device and pen name I’ve used throughout the years for opinions and pure entertainment value, not as a source of fact.” He compared the character to Alfred Hitchcock’s habit of making cameos in his own films.

Of course, Hitchcock was making fictional films. Navarro was writing supposedly nonfiction books about economics and foreign affairs, and he was using Vara as a mouthpiece for his own opinions. Contacted by the Chronicle, two people who worked with Navarro on books in which Vara appears said they had no idea he wasn’t a real person. Would Hitchcock’s camera operators have been similarly surprised?