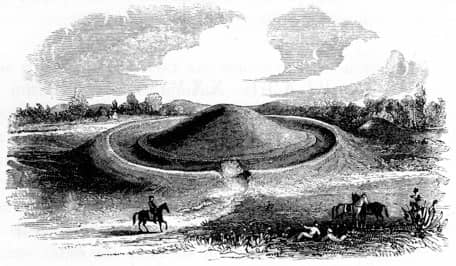 IT TOOK JASON Colavito eight years to write The Mound Builder Myth, but the project seems tailor-made for 2020. It starts with multiple waves of a pandemic and ends with conspiracies, white supremacists, and a battle between science and superstition.

At the heart of the book lie the large earthen mounds that cover a vast portion of North America. The earliest of these, Colavito points out, “were standing in their solemn glory five centuries before the Egyptians raised their pyramids.” They were built by Native Americans, but in the 19th century, a legend took hold that a lost white race had constructed them. This manufactured myth didn’t just ignore indigenous American civilizations. It fed into the theft and ethnic cleansing of the indigenous people’s lands.

In this century-spanning work of U.S. intellectual history, Colavito describes how a determined few replaced the truth of who built the ancient earthen mounds in North America with a long-lasting “monumental deception” backed by many political leaders, including several U.S. presidents. The lie has now been exposed, but Colavito argues that the “constellation of ideas” that supported it persists today.

FROM APPROXIMATELY 4500 B.C. through the time of European colonization, diverse American peoples produced different kinds of mounds. The Poverty Point culture produced concentric semicircles of mounds in the lower Mississippi Valley and surrounding Gulf Coast over the course of nearly 1,000 years. The Adena and Hopewell cultures produced more than 10,000 mounds in geometric and animal forms in the Ohio Valley. The Cahokia civilization of the Mississippi Valley spread mounds from present-day Louisiana to New York, created an urban center rivaling medieval London and Paris, and built Monks Mound, with a base the size of the Great Pyramid of Egypt and height of 100 feet.

European contact proved cataclysmic for much of indigenous America. The devastating spread of infectious diseases and violence left some native nations all but wiped out and others displaced or struggling. But even with this cultural rupture between pre- and post-contact societies, Europeans did not question the fact that indigenous peoples built the mounds. As late as the 17th century, Portuguese and French explorers observed Native Americans building new mounds in the style of the old.