In Zimbabwe, It's Crisis As Usual 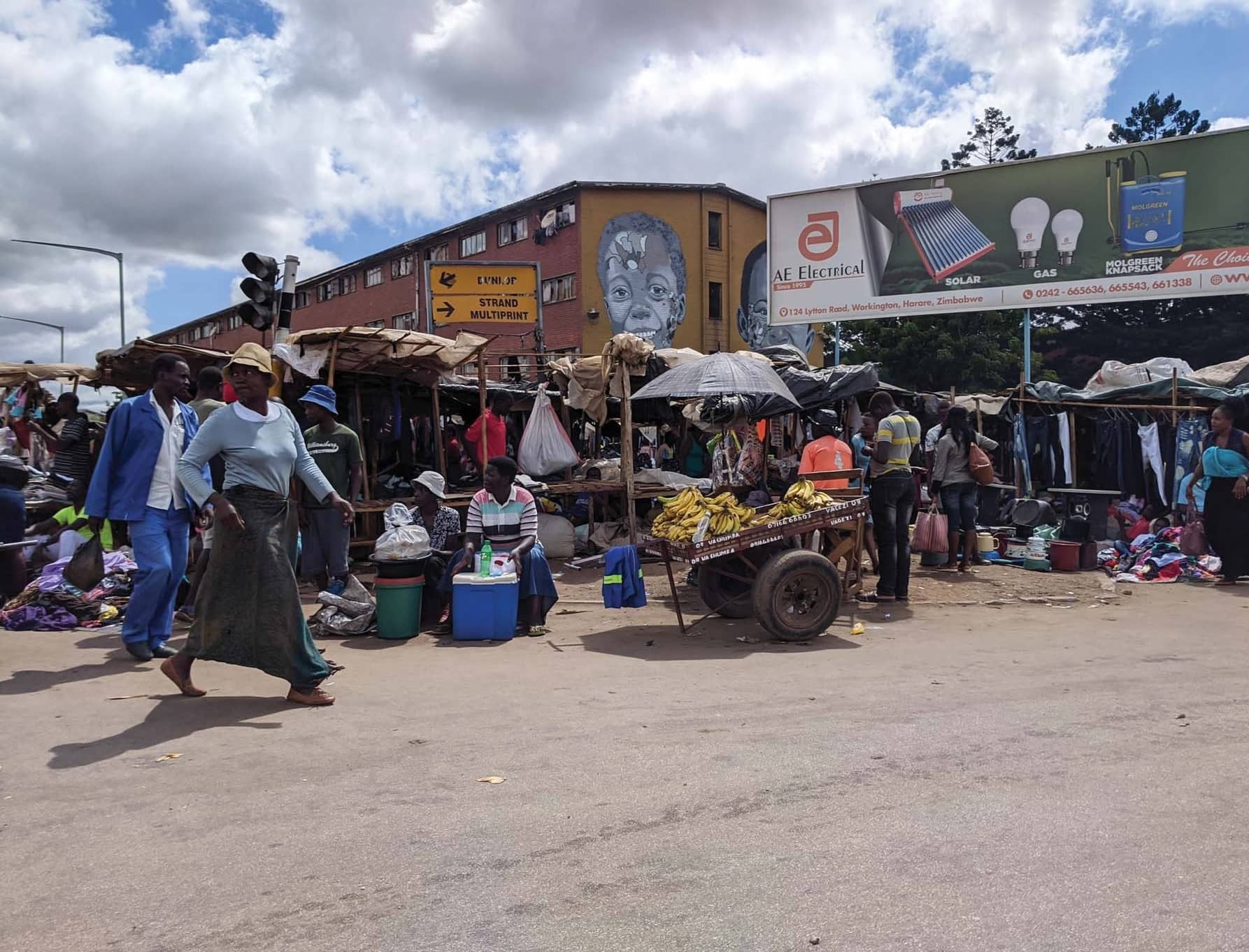 A NEW ROUND OF HYPERINFLATION WAS TAKING A HEAVY TOLL ON DAILY LIFE, EVEN BEFORE THE CORONAVIRUS HIT.

“ZIMBABWEANS ARE HEARTBREAKERS, trust you me,” drawls Prince Matsika as he reworks a hand-strung necklace in front of his stall at an outdoor city market. People bustle by, but few even glance at the beaded trinkets and wooden crafts crowded onto tables and baskets. With rapidly rising inflation and food shortages across the country, now only the wealthy and foreign tourists can afford his wares.

“Even if [tourists] come, they would think our prices are ridiculous,” Matsika says. He’s selling a piece of his own design for $20, a king’s ransom for the developing world. “But we are trying to earn that little money,” he explains, even though “it doesn’t really have a serious value around here.”

It is January, and the coronavirus epidemic in China has just begun making headlines in the West. But Zimbabwe has been in a state of economic crisis since 2018, shortly after a coup d’état toppled the 37-year reign of dictator Robert Mugabe and installed his longtime political ally Emmerson Mnangagwa as president. Major factors in the sharp economic decline include government corruption, a horrific drought, and rampant inflation and cash shortages after the reintroduction of a Zimbabwean dollar (ZWL, colloquially called “bond”) following almost a decade under a multi-currency system.

In Matsika’s city of Bulawayo, the second-largest in Zimbabwe, hungry citizens helplessly watch the staggering devaluation of their wages, savings, and pensions. Even as the public education system raises school fees, teachers cannot afford to get to work. Recently, doctors in public hospitals reluctantly ended a four-month strike, even though their salaries are now worth just 10 percent of what they were promised and despite the lack of basics, including bandages.

A minimum-wage employee in Zimbabwe may earn ZWL$600 per month (about $35), with a loaf of bread costing around ZWL$16, according to Godfrey Kanyenze, director of the Labour and Economic Development Research Institute of Zimbabwe. So Zimbabweans have become entrepreneurs by necessity. Over 90 percent of those who work are informally employed, frequently under the table, Kanyenze said in a lecture. They make jewelry at local markets, grow bananas and sell them from curbside carts, set whatever wares they can find atop cardboard stands on the street, hawk black-market gasoline, or illegally change U.S. dollars into bond in front of shopping malls.

“It’s not healthy for us,” Matsika says. “You have to be working flat-out all the time.”

Seven days a week, Christine, a soft-spoken seamstress in her 50s, hunches over her sewing machine in a cramped workshop she shares with Patrick, a young shoemaker. (Their names have been changed for fear of government retaliation.)

“If you don’t work, there’s nothing,” Christine says. “We have no weekend, no holiday. We work every day.” She starts cutting fabric before dawn, then comes into the workshop at 9 a.m. 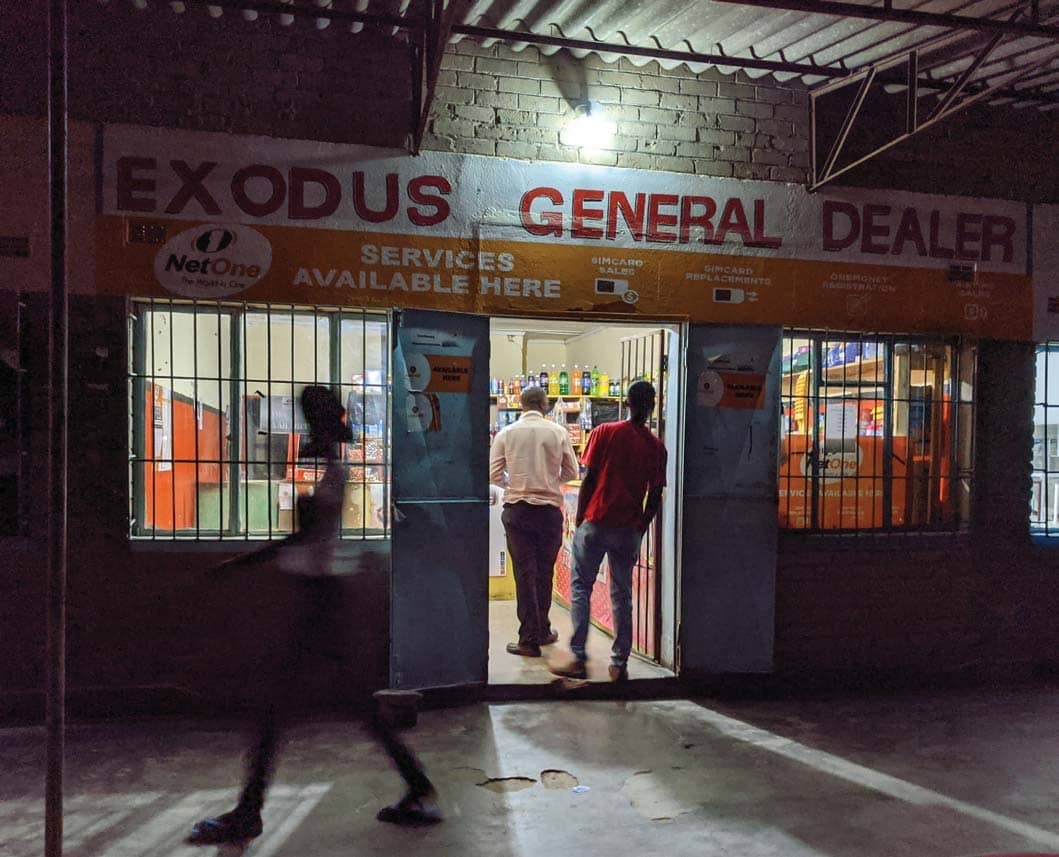 Matsika is also up at 5 a.m. most days to make the trek, via privately operated minibus, into the city from a low-income township outside Bulawayo. While transportation is readily available, fuel shortages have driven fares up and up. Many interviewees for this article say only a year ago they paid ZWL$0.50 for a one-way trip. That has risen to ZWL$5, a 900 percent increase. The government recently introduced a more affordable bus service, but demand is so high that people can wait in line for hours for a spot at rush hour.

When Christine finally gets home in the evening, she often works well into the night—if the lights will come on. “The electricity is a nightmare,” she says. The townships will sometimes be without it for more than 15 hours at a time.

Power outages are scheduled for two five-hour chunks during the morning and evening peak hours, but “the durations may be longer in the event of increased power shortfall to avoid the collapse of the National Electric grid,” a notice from the Zimbabwe Electricity Transmission and Distribution Company reads.