FROM ANTIFA TO UFOS, ONE JOKE CAN SPAWN A THOUSAND CONSPIRACIES 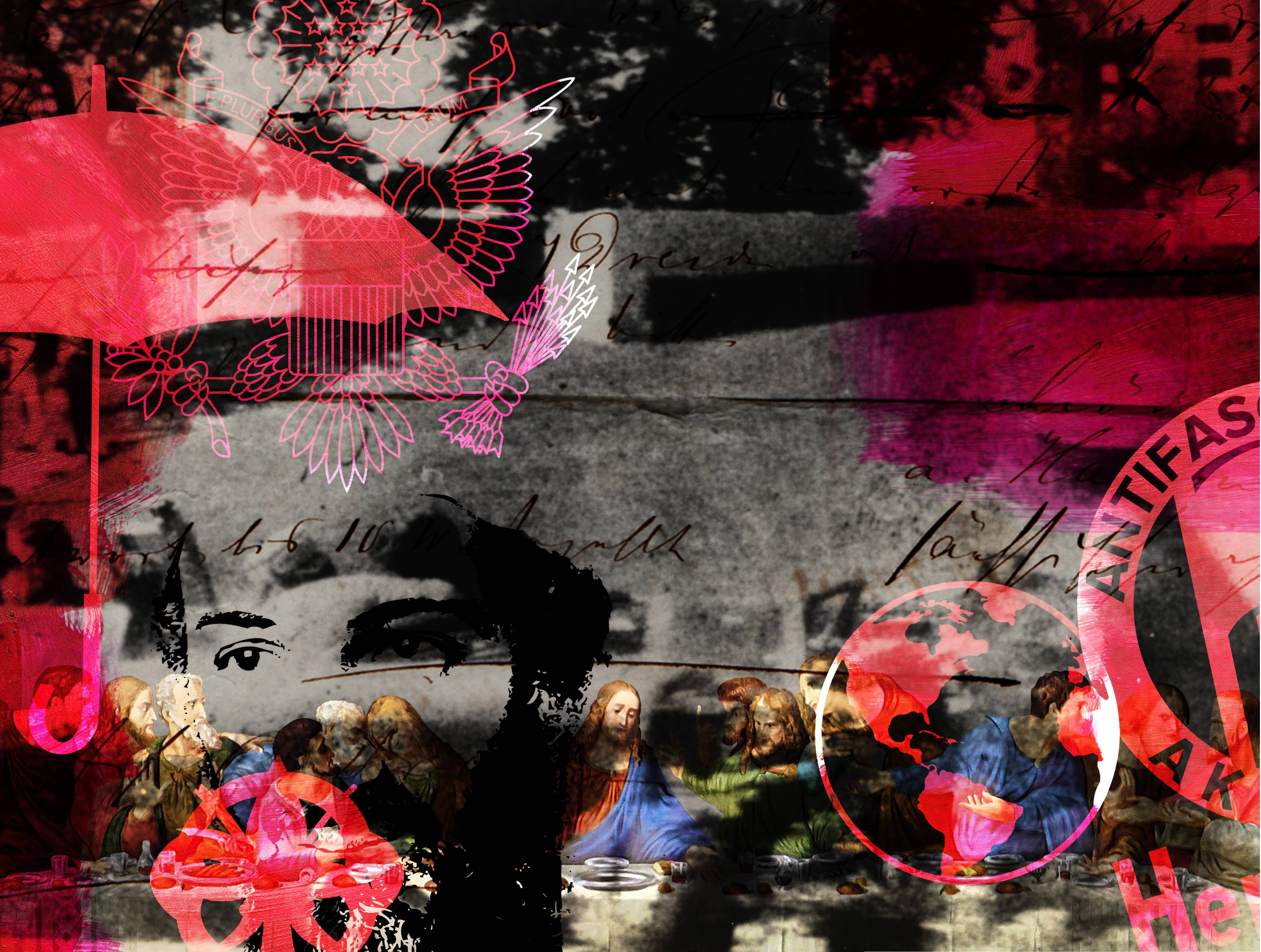 WHAT HAPPENS WHEN A PRANK OR SPOOF SPARKS A REAL BELIEF?

IF A RADICAL movement is prepared to use violence, that real-world willingness can inspire wild rumors about the group’s plans and alliances. We’ve seen that dynamic play out with movements ranging from the Black Panthers to right-wing militias. So when the militant anti-fascist network known as antifa started attracting new levels of attention during and after the 2016 presidential campaign, it was probably inevitable that it would trigger some bizarre conspiracy theories.

What might not have been as easy to anticipate was the role that jokes would play in the rumor mill.

Over the last few years, at least 375 fake antifa social-media accounts have appeared, posting over-the-top comments like “THIS IS WHY THE #SolarEclipse2017 IS BIGOTED AND RACIST.” (The statement appeared alongside a picture of an American flag on the Moon.) The “Boston Antifa” feed greeted the news of Jerry Lewis’ death with a video denouncing “unsafe humor” and declaring that the comedian “embraced the power of white supremacy.” It doesn’t take much digging to discover that these aren’t actual antifa accounts, but several media outlets have mistaken them for the real thing. When a fake antifa group announced that there was “no room” in its city for “supporters of the US constitution,” the Washington Examiner cited the post in an anti-antifa editorial. In Texas, an account convinced reporters that antifa was planning to protest a statue of Sam Houston and to beat up anyone who counter demonstrated; the news inspired hundreds of people to come to a counterprotest against a rally that was never going to happen.

Coverage of these accounts often presents them as disinformation meant to sow confusion and make the movement look bad. And that’s obviously a part of what’s going on: During the sometimes violent protests that followed the police killing of George Floyd in May, for example, members of the white nationalist group Identity Evropa started tweeting as @ANTIFA_US, promising to “move into the residential areas... the white hoods....and we take what’s ours.” But many of the accounts are also clearly meant as entertainment. One of the men behind the Boston Antifa account, Brandon Krebs, has claimed the comedian Andy Kaufman as an influence, and he appears to have followers who take his work in that spirit. (As I write, the top comment below the Jerry Lewis video says, “This is one of the best comedy channels on Youtube right now.”)

The accounts have fooled some mainstream outlets, such as Reuters and the Houston Chronicle. But the audiences that think the accounts are real, like the audiences that think the accounts are funny, tend to come from the political right. The people who maintain the feeds tend not to be very good at mimicking real antifa groups’ rhetoric—they sound more like generic left-wing caricatures—so they’re less likely to fool leftists.

Once memesters on the right started spoofing antifa, memesters on the left took to spoofing right-wing fears of antifa. Before long, the leftists found that their jokes were getting mistaken for reality too. In late 2017, for example, one @KrangTNelson tweeted this: “can’t wait for November 4th when millions of antifa supersoldiers will behead all white parents and small business owners in the town square.” Some rather unhinged stories were already circulating about an alleged antifa plot to launch a civil war on that day—a Maoist front group called Refuse Fascism was indeed planning a November 4 protest, and the rumors had spiraled from there—and the tweet went viral among people who took it literally. @KrangTNelson was soon suspended from Twitter. After another account repeated the joke, the conservative site Gateway Pundit ran an article headlined “ANTIFA Leader: ‘November 4th […] millions of antifa supersoldiers will behead all white parents.’” (The site later added a postscript: “UPDATE: Far-left radicals now claiming it was a ‘funny joke.’”)

Sometimes left- and right-wing pranksters end up accidentally collaborating. In summer 2017, a rumor took hold that antifa was going to burn flags and desecrate Confederate burial markers at Gettysburg National Park. This didn’t make much sense—there are no Confederate burial markers at Gettysburg— but the story nonetheless got picked up by Breitbart and other right-wing outlets. The Gettysburg hoax was pushed by people claiming to be affiliated with “Harrisburg Antifa,” but the rumors also drew on an online invitation to a Gettysburg “Burn a Confederate Flag to Trigger Trump Fans Day.” The event in the invitation wasn’t real: If you tried to buy a ticket, you landed on the Southern Poverty Law Center’s donation page. It had been posted by “Trolling Trumpsters,” a lefty group dedicated to baiting people on the right.

As in Houston, the Gettysburg hoax inspired a counterprotest. At this one, a rallygoer accidentally shot himself in the leg.

The most puzzling antifa jape might be a document that started circulating in mid-2017 called The ANTIFA Manual. Made up to look like a well-worn dossier, complete with a coffee stain on the front page, the file was purportedly found at The Evergreen State College in Olympia, Washington, the site of some infamous protests earlier that year. The manual was taken seriously in several quarters—it even got linked on Rush Limbaugh’s Facebook page—but anyone familiar with antifa’s largely anarchist membership would quickly recognize it as a fake. (Among other things, it announces plans to “vote proANTIFA politicians into office” and to establish a one-world government whose “ANTIFA-approved regulators” would use microchips “to monitor the citizenry of the world.”) The fact that it keeps referring to the movement as “ANTIFA,” in all caps, is itself a clear sign that something screwy is going on. What isn’t clear is whether this was originally intended to fool people or whether it was just a particularly hamfisted satire. And if it was a satire, was it supposed to be a satire of antifa itself or of the goofy rumors that swirl around antifa? Did this come from the left, from the right, or from someplace else?

One thing is certain: In addition to all the other ways that false conspiracy stories begin, from honest speculation to commerce-minded fraud, we need to appreciate the role of jokes. We can divide those jokes into three categories: pranks, accidents, and enigmas.

Pranks are deliberate hoaxes, like the plots promoted on fake antifa accounts. In some cases, these are essentially disinformation campaigns. But even then—unlike, say, the fake Black Panther literature the FBI planted in the 1960s, or the stories the KGB spread in the 1980s claiming that the U.S. government created AIDS—the aim is at least partly satiric. In many cases, the story’s author intends to reveal the truth after a while, hoping to embarrass or illuminate the people who embraced the story. Such plans do not always work out as intended.

Accidents, by contrast, were not meant to be believed. Like @KrangTNelson’s tweet, they are works of fiction that people unexpectedly mistake for facts. Not only do their authors not intend to fool anyone, but sometimes they are not even aware that they have fooled anyone.

Enigmas fall into the cloudy territory in between. As with The ANTIFA Manual, it’s not clear whether they were supposed to trick people. Sometimes the author himself may feel ambivalent about his intentions.

THE INTERNET IS infamously awash in disinformation, as intelligence agencies, clickbait sites, political campaigns, and freelance trolls spread deceptions. It is also filled with practical jokes, many of them devoid of any political content at all. Make a Venn diagram of those two categories, and the overlapping zone will contain these conspiracy pranks.

Take Christopher Blair, who used to post apocryphal stories at a site called America’s Last Line of Defense. His headlines—“5 Liberal Terrorists Arrested At Capitol Planning To Assassinate President Trump,” “Democrat Mayor BUSTED Working With Latino Thug To Sell Meth And Extort Sex From Young Girls,” “Police Identify Monica Lewinsky’s Killer”—sound like tales that might be spread by a dedicated Republican, and several of them went viral among conservatives who appear to have believed they were true. But Blair insists he’s actually a liberal. A profile in The Washington Post described him writing a transparently false story about Michelle Obama and Chelsea Clinton giving Donald Trump the finger during the national anthem, then saying, “How could any thinking person believe this nonsense?” before hitting publish.