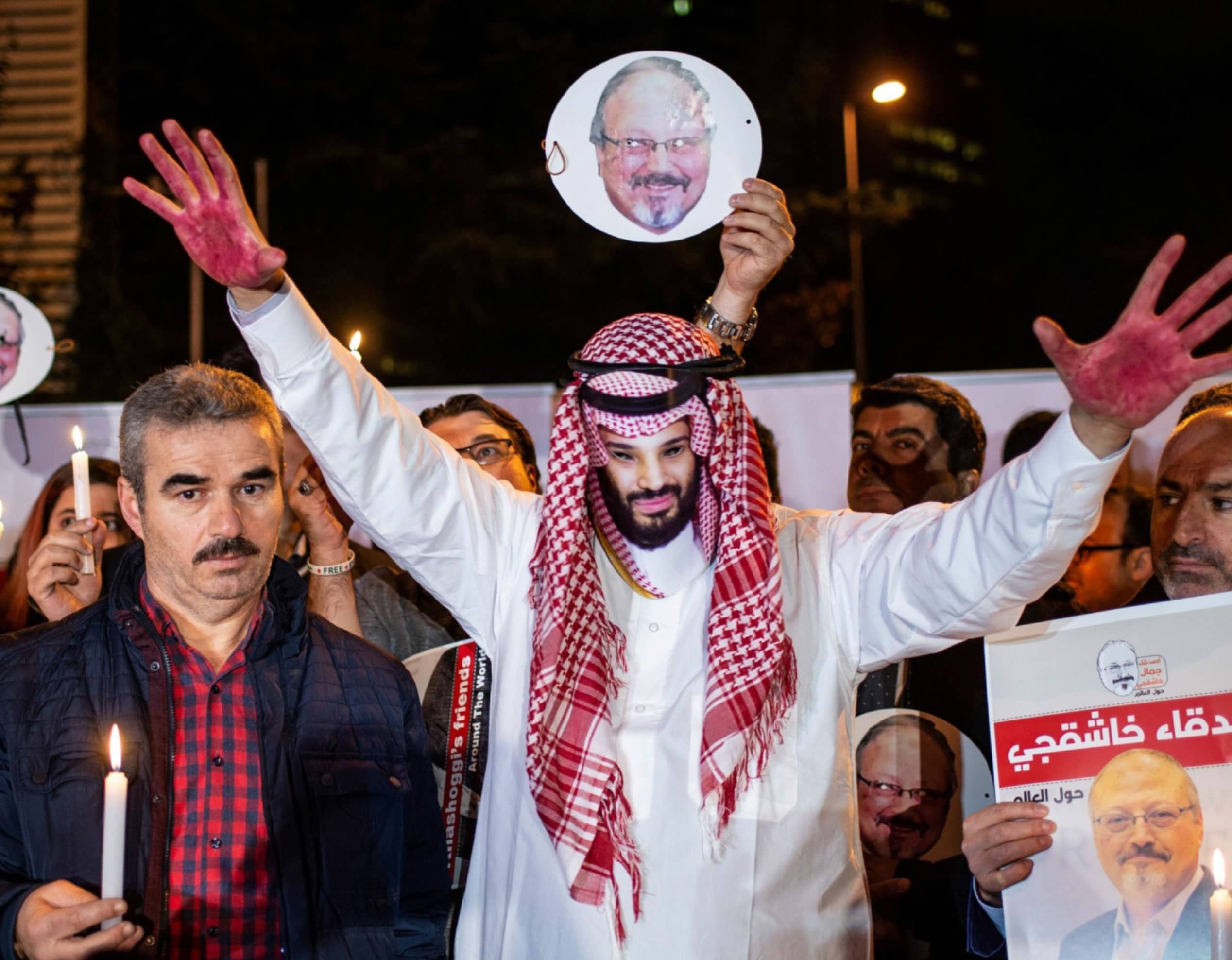 MOHAMMED BIN SALMAN had been crown prince of Saudi Arabia for only a few months, but he was already on his second U.S. visit. In March 2018, the young monarch (usually known as “MBS”) spent three weeks on a whirlwind P.R. tour of America, meeting everyone from JeffBezos to Morgan Freeman.

But the trip was about more than photo ops and hobnobbing. In the month leading up to the visit, the Saudi government had retained three American law firms—David Kultgen, King & Spalding, and Pillsbury Winthrop Shaw Pittman—to advise it on and lobby for a potential bilateral agreement on nuclear research. On March 7, a Canadian law firm called Gowling WLG likewise signed a $66,000-per-month contract with the Saudi government related to “the development of a civil nuclear program.” (As of press time, none of these firms has responded to requests for comment.)

Saudi Arabia and the United States are engaged in negotiations over just such a program: Under a proposed plan, American companies would build nuclear reactors for the Saudi government.

On March 18, MBS told CBS News that Saudi Arabia intended to build nuclear weapons “as soon as possible” if its enemy Iran acquired them. In November, The New York Times reported that U.S. intelligence has investigated the possibility of an already existing secret Saudi nuclear weapons program.

On October 31, Sens. Marco Rubio (R–Fla.), Todd Young (R– Ind.), Cory Gardner (R–Colo.), Rand Paul (R–Ky.), and Dean Heller (R–Nev.) signed a letter stating that the negotiations “should be suspended immediately and indefinitely.” In so doing, they broke from President Donald Trump, the leader of their own party, who had begun the talks.

Although the rapport between Trump and MBS is as warm as ever, congressional discontent with the crown prince has been growing. In particular, the assassination of Washington Post columnist Jamal Khashoggi at the Saudi consulate in Istanbul, Turkey, on October 2 seriously damaged MBS’s reputation. (Khashoggi had been an outspoken critic of the Saudi government and of MBS in particular.) In response to the slaying, members of Congress have threatened to cut off everything from military aid to atomic research cooperation.

But congressional debates, diplomatic cables, and lobbying disclosures reveal that the tensions run far deeper than one journalist’s disappearance. Between an increasingly restive faction of Republicans in the Senate and Democrats—including a cohort of foreign policy skeptics—taking control of the House of Representatives in January, Saudi Arabia may have a much harder time maintaining its influence on Capitol Hill going forward. From changing energy markets to the spread of Sunni Muslim militancy worldwide, a variety of factors will force the new Congress to make hard calls about America’s closest Arab ally. And that wouldn’t affect just the Middle East. Lawmakers’ willingness to take an increased role in shaping U.S. foreign policy could be a blow against decades of expanding executive power and long unquestioned “national security” dogma justifying military interventions abroad.

THE “POST-KHASHOGGI MOMENT” was an opportunity for legislators “to make their displeasure known” about foreign policy trends, according to Emma Ashford, a research fellow at the Cato Institute who has written about Saudi-U.S. relations.

President Barack Obama believed that it “would be more stabilizing in the long run” to balance between Middle Eastern powers by engaging with both Iran and Saudi Arabia, says Ashford. But the Trump administration has switched to “a military-heavy approach” to root out Iranian influence abroad. This strategy is informed by Saudi leadership’s belief “that Iran is the biggest problem” in the region.

“The Trump administration has really pinned their strategy of confronting Iran on Saudi Arabia,” adds Kate Kizer, director of the Win Without War policy program at the Center for International Policy.

Trump was at first reluctant to confront Saudi Arabia over Khashoggi’s disappearance. On October 12, the president stated, “It’s in Turkey, and it’s not a citizen.” (Khashoggi was a U.S. green card holder.) But evidence soon mounted that the journalist had been killed and dismembered with a bonesaw by Saudi special forces waiting inside the consulate. On November 17, U.S. officials leaked the conclusions of a secret CIA report, which found that MBS likely ordered Khashoggi’s murder.

Meanwhile, Saudi Arabia’s explanations changed from day to day: Khashoggi was killed by a fight he started, or a kidnapping gone wrong, or a plot by rogue elements. Members of Congress began demanding punitive measures, including sanctions on MBS himself.

On November 20, President Trump released a statement on Khashoggi: “It could very well be that the Crown Prince had knowledge of this tragic event—maybe he did and maybe he didn’t!” Criticizing unnamed “members of Congress,” the president added that Saudi Arabia is “a great ally in our very important fight against Iran.”

James Mattis, who was at the time secretary of defense, asserted during a November 28 hearing that there was no “smoking gun” in the Khashoggi murder. But Sen. Lindsey Graham (R–S.C.) came out of a later briefing with the CIA claiming that a “smoking saw” implicated the crown prince himself.

Congress was not pleased.

Back in February 2018, Sens. Bernie Sanders (I–Vt.) and Mike Lee (R–Utah) had proposed Joint Resolution 54, which would use the War Powers Act to withdraw U.S. support from the Saudi intervention in Yemen. It didn’t get a hearing. But after the Khashoggi affair, lawmakers revisited the resolution as a tool they could use to pressure MBS even without the Trump administration’s help.

Saudi Arabia had intervened in Yemen in 2015 after rebels known as the Houthis overthrew the government in Sana’a. During the final Senate floor debate around Resolution 54, Rubio said that “this fight will continue, and the reason why is pretty straightforward: The Saudis view the Houthis as agents of Iran.”

“It’s not that [the Houthis] are an Iranian proxy; it’s that they’re so isolated that they’re looking for outside support where they can get it,” she says. Iran denies Saudi allegations that it supplies the Houthis, but U.N. investigators found in December that Houthi forces are using Iranian-made weapons shipped to Yemen after the war began.

Resolution 54 notes that America—also eager to counter Iran—has been providing “aerial targeting assistance, intelligence sharing, and mid-flight aerial refueling” to Saudi forces in Yemen. A few weeks before a scheduled vote on the measure, the Saudi military requested a freeze on U.S. aerial refueling. An unnamed Senate staffer told NBC News that it was “a means to pre-empt a potentially damaging debate” in the Senate.

American support for the Saudi-waged war doesn’t sit well with some in Congress. In a February 2018 press release, Sen. Chris Murphy (D–Conn.) accused Saudi Arabia of “deliberately using disease and starvation and the withdrawal of humanitarian support as a tactic.” He told the Senate in November that the blockade of Houthi-held areas has led to the deaths by starvation of 85,000 children.