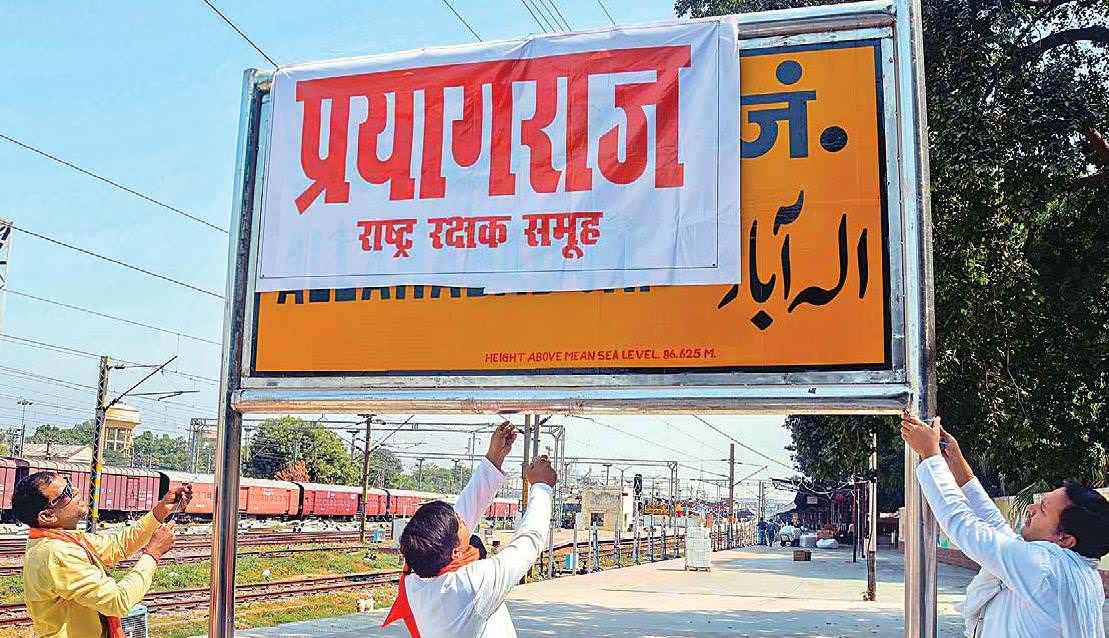 BJp’s renaming frenzy—hindu-friendly names in war against Islamic ones.

Shakespeare be damned, the rose would never smell as good by any other name. Not for India’s right-wing. Not till the 2019 general elections, at least. Across India, in most BJp-ruled states, governments are changing names of cities, streets and railway stations, stripping hundreds of years of history to “reclaim” Indian culture and heritage. It’s as simple as that. soon after the BJp-led government came to power in 2014, ‘ghar wapsi’ dominated the political discourse as hindu fringe groups went about reconverting Muslims to their “original” faith, allegedly even forcibly. With the country set for the 2019 Lok sabha polls, now the spotlight has veered towards ‘naam wapsi’.

While the phenomenon of changing names of cities is not new, the raison d’étre is definitely different. Major cities were earlier renamed to wipe out signs of the British Raj—Bombay became Mumbai, Madras changed to Chennai, Calcutta became Kolkata and Bangalore was renamed Bengaluru. The reason given by BJP leaders for the latest name-change spree is to cleanse what the Mughals had sullied. The intent is definitely political as the BJP tries to pit “Hindu pride” against Muslim invaders ahead of the elections.

Allahabad would be officially renamed Prayagraj before lakhs of devotees descend at the confluence of the Ganga and Yamuna for the Kumbh Mela in January. The legal process may have hindered the government’s plans for construction of the Ram Mandir, it has not deterred CM Yogi Adityanath—who answered to the call Ajay Singh Bisht before he became a monk—from renaming Faizabad district as Ayodhya. In August, the iconic Mughalsarai junction was rechristened Deendayal Upadhyaya junction. Before that, Mughalsarai town itself was renamed after Upadhyaya, the co-founder of the Bharatiya Jana Sangh. Emboldened by the government’s willingness to change the names of cities, towns and roads— Aurangzeb Road in Delhi was renamed A.P.J. Abdul Kalam Road in 2015—demands from lawmakers and organisations are growing to rename other places.