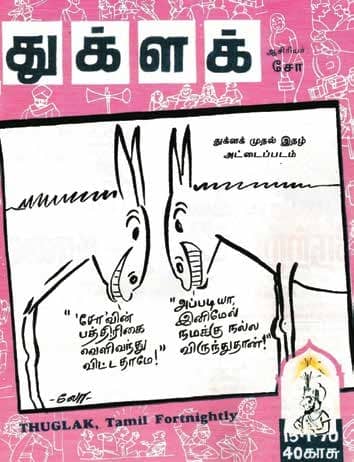 Cho Ramaswamy launched Thuglak in January 1970 with a cartoon of two donkeys on the cover, promising them a steady feast now that the magazine had arrived. Many expected the magazine would prove to be “a donkey diminishing into an ant before disappearing”, as a popular Tamil phrase goes. But Thuglak, named after Cho’s famous Tamil play Muhammed Bin Thuglak, a roaring political satire, has been as doughty as a donkey. There were a few more covers with India’s most verbally abused animal during the first Tamil political magazine’s 50-year journey as Thuglak became an inseparable part of Tamil Nadu’s Dravidian-dominated political narrative. Brahmins might form the bulk of its loyal readers, but no major politician could afford to ignore its contents, especially when Cho was around.