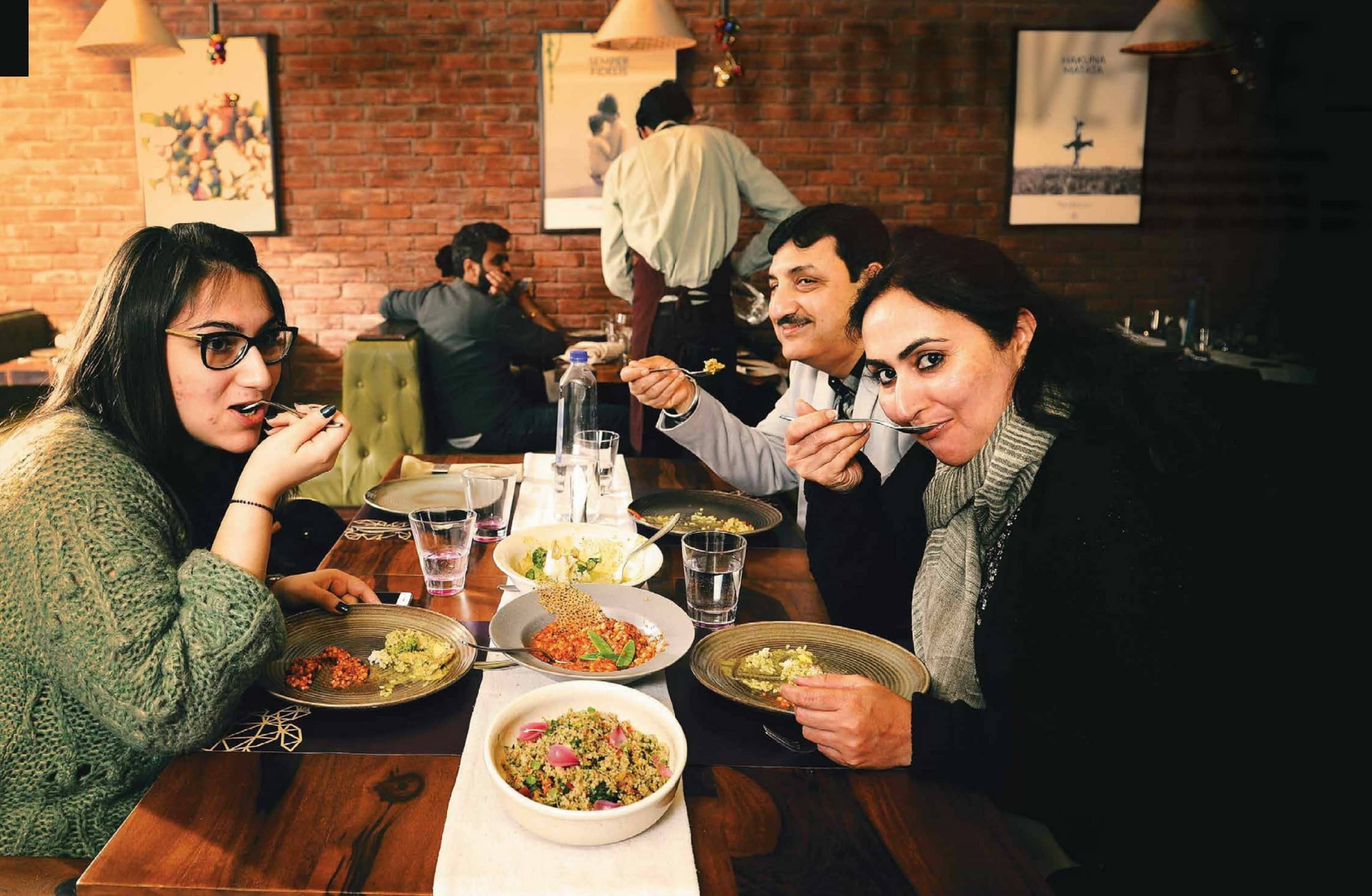 Not just a different menu, but an alternative way of relating to the living world—this ism is a hit.

If not for that goat milk, Gandhi would have been vegan. Yes, that’s how close India is to having a patent on one of the biggest global fads of recent times. ‘Fad’ or ‘trend’ perhaps would be a wrong word for something that comes out of a deeper philosophy. Veganism, after all, rests on the idea that humans are compassionate beings and it is in their nature to choose kindness over killing— or that such a state must be aspired to and can be taught or inculcated. Those who turn vegans see it as a life-changing transformation free of any religion, propaganda, violence, lies, guilt, cruelty, rules, agenda, guru or a guidebook. A lot of that can be admired, a lot of it can also be submitted to a careful, respectful and sceptical analysis. But whichever side of that cheese omelette or chocolate sundae (or smoked pork) you stand, there are things here that we can learn from and apply—for the sake of the planet.

But back to Gandhi first. Whether you prefer to bring him down a few notches, thinking of him as a faddist, or to ennoble the ‘fad’ itself by linking it to him, the historical connection is interesting. From a family steeped in Vaishnav traditions in Gujarat—with the very visible imprint of Jainism—it’s easy to trace that movement in the mind towards nonviolence as a moral ideal, leading up to a whole worldview around collective sustainability. It’s also easy to see how these ideas also link up with a kind of monkish renunciation. How thinkers have associated vegetarianism with celibacy (even if a handful of hundreds of millions in India will not agree). How Gandhi, before journeying to England as a young man, swore to his mother that he would not touch “wine, women and meat” (an association that will strike us now as anachronistic and sexist). Or how he linked intake of milk to “animal passions” (remember all those film scenes with the coy bride). A freeze-frame of the noble intent and a touch of the mental confusion going with it, therefore, is already available in the early Gandhi, way before British woodworker Donald Watson coined the word ‘vegan’ in 1944.

The confusions around veganism extend beyond how the word is to be pronounced. For starters, it’s not the same thing as being vegetarian. A masala dosa from that neighbourhood Udipi joint would be vegan (if there’s no ghee), but the butter milk you wash it down with is not. And yet, a lot of its primary impulse comes as a reaction to the cruelty and excesses of the meat industry, which it shares with vegetarianism. Paul McCartney famously said, “If all slaughterhouses had glass walls, everybody would be vegetarian.” That simply gets extended to dairy products. Actress Richa Chadha became a vegan two years back when she realised the kind of unethical practices that goes into keeping cows pregnant throughout their life because humans want to have milk. “I think to be a vegan is a compassionate choice,” she says.

Taken to its logical extreme, any kind of animal product would be forbidden in veganism as a lifestyle choice. And not just most Indians, but most of humanity would fail the test. For it’s not just that tall glass of lassi, that plate of thair saadam, or ice cream or mango shake, that would be sinful. You can’t carry a leather bag, or wear wool in winter, that pearl necklace is a no-no, so is that Kanjeevaram, all the piano you’ve heard is a sin (the keys are ivory), so are all the songs with tabla or most other drums (animal skin), or even string instruments where animal gut was used. Yes, ethical alternatives can be found in many instances, but you get the drift. Don’t even call your darling ‘honey’.

The other big strand in veganist thought has to do with biology. The idea that humans are naturally vegetarian; that monkeys are vegetarian; that the convoluted shape of our intestines are more like that of deer and not the linear one of lions; that drinking milk beyond infancy is unnatural to all other mammals (not to speak of snatching some other animal’s milk).

A few contrasting thoughts here before going to the practitioners, the evangelists and the sceptics. The vitamin B12 cannot be got from anywhere other than animal sources, and most vegans have to pop a pill to make amends there. Then, teeth: humans are heterodontic. We have incisors to tear/cut plant food and molars to grind them, but also canines for meat, a sign of our omnivorous nature. And our closest ape relatives, chimpanzees and bonobos, are omnivorous too. Frugivorous mostly, subsisting on fruit. But they are more than just opportunistically non-vegetarian (consuming meat if they come across a carcass), they actually hunt monkeys, birds and smaller mammals, and chomp down termites and insects (even if all that forms just 3 per cent of their diet). There’s also the troubling thought that it’s precisely the expanded nutritional palette brought about by cooked meat that may have made the ape brain grow and created the human being in evolution.

But now that we are here, and in billions, and since the planet groans under our weight, choices can still be made. Richa Chadha was quite clear about it. The dairy industry doesn’t function the way it used to when “our parents were consuming milk”, she says. Lord Krishna wasn’t vegan either, but the cows then were kept in good conditions (and heard a lot of good flute). Now they have chemicals and steroids pumped into them to stimulate them to produce more milk, while the calf is cruelly separated from the mother. “If you ever witness that, I don’t think anybody will ever have the desire to drink milk again,” says Chadha.

She doesn’t believe in lecturing people, though, because “the entire philosophy of veganism is based on live and let live”. The desire must come from within. “I work with the NGO ResQ and I’ve seen how male cattle get thrown out of trucks. It’s inhuman to drink milk when you know how female cattle are pumped with hormones and forced to give milk. Sometimes blood comes out from their udder. The male cattle are not even this lucky—they often get separated at birth, to be given away to slaughterhouses because they are of no use in the dairy industry. There’s a lot of cruelty and I don’t want to carry all the negativity in my head. Plus, meat can cause cancer and this has been confirmed by WHO.” And how does she feel, physically, after becoming a vegan? “My hair and skin are better,” she says.

DR Nandita Shah is one of the earliest stalwarts of veganism in India—in 2005, she founded Sharan, wishing to connect people to animals and nature in order to heal themselves and the planet. “It’s a documented fact that the slaughterhouse worker suffers from emotional problems—violence, anger, suicidal and homicidal tendencies, drinking, addiction— because they are always dealing with death. They do the work nobody else wants to do,” she says.

Does the seed of human violence spring from our acceptance of brutality vis-a-vis how meat and milk come to our table? It’s not a self- evident fact, but what Hannah

Do you think veganism is just a fad or does it have a much deeper philosophy?

While veganism has the intention of saving the environment and animals, frankly, it’s just an­ other fad. Any diet that is not flexible in terms of food options and requires you to eliminate a certain food group forever is a fad. A good diet is flexible and dynamic in nature. It should allow you to eat according to your body’s needs and lifestyle.

Is veganism picking up fast?

It’s unfortunate that very few people follow veganism with the right intention. For most, it’s just about following others. Herd mentality is something this gen­eration is into but for healthy liv­ing, one needs to personalise their lifestyle decisions.

Milk is not the problem; the quality of milk is. Most of us have grown up drinking milk and eat­ing milk products. So, have our grandparents. It’s the quality of milk, its source and the way it is sourced that have changed. Today, milk is sourced in very unethical ways. Cows are pumped with growth hormones, antibiotics and fed corn and soy to fatten up. If you wish to drink milk, do it the ethical way, and respect nature.

Can extracting milk be considered cruelty to the cow?

There is a wrong and a right way of doing things. If you are depriv­ing a calf of its mother’s milk out of sheer greed and impatience, that is certainly cruel.

Can a vegan do high-intensity exercises?

Kuntal Joisher is India’s first vegan mountaineer to scale Mt Everest. His performance, with his choice of lifestyle, has been a mindset breaker. People thought it was impossible to build that level of nutrition and fitness which is required for such a chal­lenging environment. But to everyone’s surprise, he has climbed many mountains. However, I would say that nutrit­ion is a fraction of what it takes to be successful. There are other vegan mountaineers too who did face challenges. Other qualities are needed apart from nutrition: the right kind of training, recov­ery, mindset, willpower and determination.

Is it easy to be vegan in India?

It is easier to be a vegan in India because the consumption of non­ vegetarian food is much lesser as compared to other countries. However, India is one of the largest consumers of milk, so it may be a challenge for someone who has been eating dairy products throughout their life before turning vegan.

What are the deficiencies a vegan diet could lead to?