Hindu India Or Digital India? Choice Is Yours 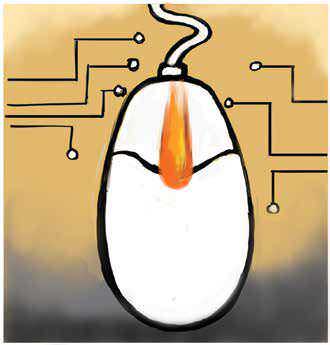 They're joined at the hip: the superficial modernity of Digital India and a deep, unspoken 'Hindutva'

“I know, to achieve the vision of Digital India, the government must also start thinking a bit like you (Silicon Valley).”

“We will cleanse every area of public discourse that has been westernised and where Indian culture and civilisation need to be restored—be it the history we read, our cultural heritage or our institutes that have been polluted over years.”

If there is one characteristic that can define India since 1991, it is the fundamental disjunction between the scientific-technical and the economic on the one side, and the ethical/moral and the social/public good on the other. The latter are sacrificial lambs at the altar of a neo-liberal, market-led model of development that can be essentially termed as technicism. In this conception, development is merely reduced to economic growth and progress in science and technology rather than a broader understanding of human or planetary well-being. Of course, science itself is not pursued for its revolutionary implications, while technology is merely a panacea for practical needs. Both are seen in a vacuum, quarantined from social contexts.

While this tendency is not unique to India, under the present Narendra Modi-led regime, it acquires a radically new feature. Technicism is married to a virulent and aggressive cultural agenda. A Digital India is sought to be ushered in, but premised on the revival of the great Hindu civilisation. The attempt to reach the pinnacle of economic and scientific development is accompanied by the project of cultural “cleansing”. But development and culture mirror each other—in yoking culture to technicism, culture itself becomes mechanical, losing its vitality.

Recently, the Financial Times, London, argued that Narendra Modi “embraces modernity...just not at home”. It sees a dichotomy between “India’s first tech-savvy, social media-enabled prime minister” and his party’s own culturally regressive agenda at home. On the one hand, there is the globe-trotting and internationalist PM, courting world leaders and business heads to “Make in India” and visiting the Silicon Valley to “Start-Up India”, and on the other, there is his party and fundamentalist supporters who seek to enforce an unmodern code when it comes to meat-eating, romantic relationships, school pedagogy, critical thinking,foreign culture, the religious “other” and so on. But this dichotomy between development and Hindutva, widely shared by even critical commentators, is a false one.

Even during the elections last year, this narrative was dominant that the majority of the people who voted for Modi wanted development and not Hindutva and that the bjp was following the cue. This misunderstands the nature of the bjp and its relationship with the rss and the Sangh parivar, and underestimates the large numbers who might not be explicit supporters of Hindutva, but give silent assent to a majoritarian Hindu national identity by not actively rejecting or resisting Hindutva. Unlike common wisdom, the latter is more dangerous than the former.