Cracker Of A Green Diwali 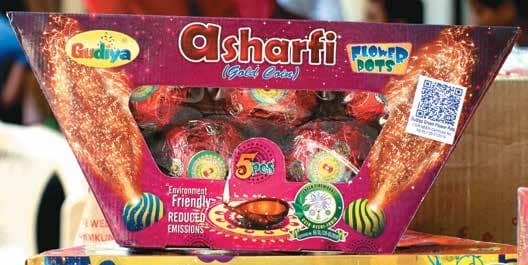 Hunt for safe fireworks throws up a few options. The festival will tell if they stay with a bang or just bomb.

The chest puffs up in excitement as the ‘rocket’ explodes in a ball of iridescent sparkles. happy Diwali/Deepavali! Greetings are exchanged almost in a daze, gasping for oxygen, eyes smarting, shrouded in a haze of smoke as more missiles fly up into the night sky, and the irreverent ‘atom bomb’ splits the ears—human and animal alike. And the incandescent ‘flower pot’ throws up another round of gaseous illumination. Who named that piece of irrepressible rudeness an ‘anaar’? The sweet pomegranate is known for its anti-oxidant properties, never for causing harm to the lungs—those air pumps working obediently, tirelessly from cradle to crib, unless obstructed by an anaar of 10 seconds of fame and flame.

How about an anaar—QR-coded, government-certified environment-friendly—manufactured with fewer harmful metals/chemicals and with reduced toxic emissions? Joking? Nah. This Diwali, the chest might cough a little easy—thanks to health-friendly ‘green firecrackers’ and a slew of initiatives from the Supreme Court and Indian scientists. These release 30 per cent less particulate matter (PM 2.5 and PM 10) and lethal gasses. Their success on debut can be ascertained only after Diwali, though.

The move follows last year’s Supreme Court intervention, spurring the Council of Scientific and Industrial Research (CSIR) to direct its National Environmental Engineering Research Institute (NEERI) in Nagpur to develop “green crackers”. A team at NEERI—comprising 24 scientists/researchers and helmed by Sadhana Rayulu—took nine months to develop the first prototypes, followed by tests to produce India’s first ‘green fireworks’. This Diwali, these would be tested by people.