Santhara: The Right to Die 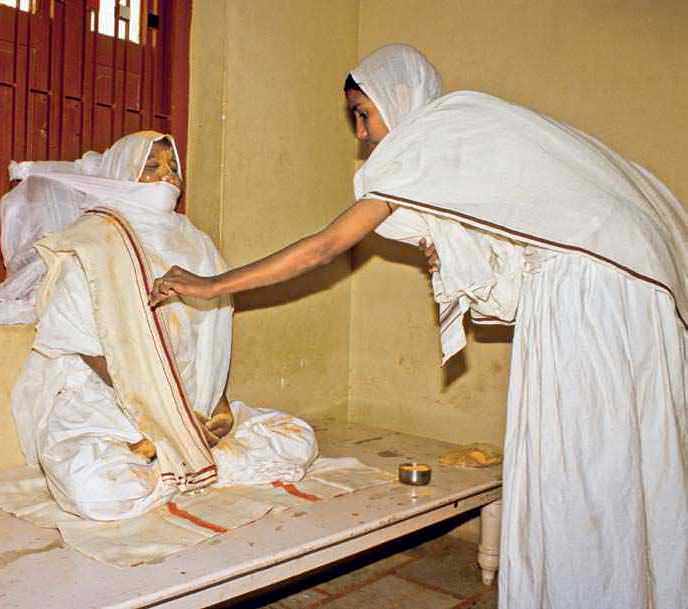 The age-old Jain practice of Santhara has been held illegal by a court, raising old questions anew. Does the state own every life under it, or does our right to life also include the right to stop living?

On the homepage of Dhanraj Sangoi’s cellphone is a picture of his mother soon after she turned 86. It is a close-up of her face. Her hair, parted at the centre, has been pulled back tightly to form a bun. Her ageing skin hangs at her cheeks, but her jawline is sharp and pronounced. A fall about four years earlier had severely limited her movement, but you see no perceptible frailty in this picture. Strong and healthy, she stares straight into the camera with a grim expression. But if you observe closely, you can notice the edges of her mouth curling, perhaps into a smile.

“Now see this,” Dhanraj Sangoi, 62, says somewhat excitedly as though about to reveal something astonishing. He dips into a folder of images in his cellphone and hands the device over to me. These are photographs of his mother’s body on the day of her funeral. It is only a few months after the earlier picture was taken, but her body has undergone a remarkable transformation. She is now severely gaunt, almost skeletal. Propped upright on a brightly decorated palanquin, her hands folded atop one another, she has been made to sit as though in a meditative posture. A white shroud has been wound around her body and a white surgical mask around her mouth.

In the pictures, relatives take turns to carry the palanquin, an unusually cheerful crowd following it. This was how the diminished figure of Vadji Sangoi was carried, seated in a palanquin, from their home in Mumbai’s Ghatkopar suburb through a busy road to a crematorium.

“We were so happy that day. Can you see?” Sangoi asks. “No one is crying or mourning. This is because she is closer to moksha.” In the evening, a prayer session was held where sweets were distributed to mark the celebratory nature of the event.

Dhanraj’s mother Vadji had undertaken Santhara, the ancient Jain practice where individuals voluntarily and systematically starve themselves unto death. Vadji lived for 30 days after taking the vow of Santhara, a period during which she completely gave up food and took only occasional sips of water from a teaspoon till the last week of her death. During those 30 days, the entire Sangoi family, even those who had moved away to other parts of the city, took a break from their jobs to witness what to them was a remarkable event of devotion. The house swelled with outsiders, some of them acquaintances though mostly strangers. Informed through WhatsApp messages and announcements in the community newspaper, they turned up every day to watch her slow death. “There were so many visitors,” Sangoi says, “we had to keep ‘visiting hours’ for outsiders.”

As it now stands, this ancient Jain practice of Santhara has been deemed illegal. On 16 August, the Rajasthan High Court, delivering its verdict on an old writ petition, found the practice akin to suicide and declared that anyone found practising it would be charged with an attempt to commit suicide.

“Why is Santhara suicide?” Sangoi asks. “It is just the opposite. Suicide is for the depressed and the weak-willed. But Santhara is for the enlightened and strong-willed.”

The ruling, as expected, has been appealed against at the Supreme Court. Whatever the eventual decision is, the judgment is bound to be momentous. The issue pits two important fundamental rights enshrined in the country’s Constitution, the right to life and the right to religion, against each other.

Is life sacrosanct, something bestowed upon by God, and hence, as the argument goes, neither the individual’s nor the state’s to take? Or is it the duty of the state to decide an exceptional circumstance, for instance when an individual is in a vegetative state, under which life can be ended? Could it be that the right already exists with all individuals, not to be conferred upon by the state on rare occasions but something every individual is born with? That the right to life by extension also means the right to stop living, making the right to die an essential fundamental right? Why is it that death in a war is valourised as martyrdom by both state and society, but death by suicide, where no injury is brought on to anyone else, is spurned as cowardice?

These are complex questions without any easy answers. And India, like most other modern societies, is now grappling with the issue of death, specifically over who, if at all, has the right to decide on it. The debate around Santhara is just the spark for a much larger one, about the ethics, legality and morality of the ultimate freedom— the right to stop living.

Apart from the debate over Santhara, the country is also caught up in a discussion around euthanasia, about its need and importance in modern society. Interestingly, suicide, which Santhara has been compared to, is being sought to be decriminalised. The process started late last year when the Centre announced its decision to delete Section 309 of the Indian Penal Code which makes ‘attempt to suicide’ an offence.